The Church, gratitude and the erosion of innocence 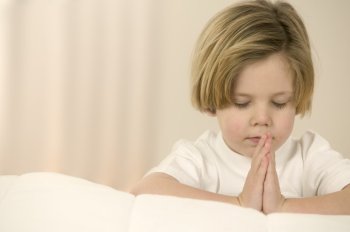 A parent writes about the problem of innocuous children's activities run with a hidden religious agenda, and defends his right to raise his children how he wishes, without organisations using playgroups as a cover for proselytising to children.

There are probably many dads out there who would find this image beautiful. Not me. In fact, it makes me very uneasy – and it's particularly concerning to me now because I've just found out that my own 3 year old daughter is being led in prayer at a local playgroup.

The Church still plays a big role in the community in the UK. Churches and church halls are great facilities which run and host any number of activities and groups, some of which are very handy for parents looking for something to do with their kids. And it's all put forward as being very open and caring and innocent and, quite honestly, I'm made to feel bad for being sceptical.

But, of course, I try to be magnanimous – mostly for my daughter, who deserves a variety of activities – and trust that these activities, held in church-halls, which purport to be god-free, are indeed run out of the goodness of people's hearts, rather than as an opportunity to sow the seeds of religion in innocent young minds.

So, you can imagine my surprise when my daughter put her hands together one night as I put her to bed, and began reciting a prayer. It was a heart-sinking moment, which marks a crushing realisation in my life as a hopeful person and dad; I cannot protect her. And some people can't help themselves.

Turns out she was being led, with the rest of the children at the playgroup, in saying grace. The playgroup is held in the hall of a Catholic church but, like all of these groups, the suggestion is and has repeatedly been made to me, that this is simply a matter of logistics. And, when dealing with the minds of 3 year old children, you'd be forgiven for assuming that there would be nothing more to it, right?

It is at this point in the post where I issue the obligatory disclaimer stating that everyone is entitled to their beliefs and that they can raise their child in any way they see fit. And you may well be thinking what the big deal with saying grace is anyway?

It might be tempting to say it's all harmless, but pick a god you don't believe in – and let's start getting your child to pray to them, shall we?

I emailed the group organiser for clarification on the church's involvement in the group and her response was either massively sarcastic or worryingly oblivious. She seemed to take my "concerns" to mean I wanted more religion in the group, and even invited me to run a bible stories session. Fair dues to her, if that is a zing it's a good one – but forgive me if I don't laugh very long or hard for her lack of sympathy over my concerns.

It now falls to me to either be the bad guy and pull my child out of the group, leaving my mother-in-law at a loose end every Monday, or throw away my principles and go along with the "harmless" ritual.

Every dad will face these moments where they feel their children slip away ever so slightly, and I think this might be my first. And it is so sad that this world, in which I find so much beauty, holds such traps.

The views expressed in the blog are those of the author alone, and are not necessarily the views of the National Secular Society. This blog was first published at the Dads Rich Pageant blogsite and is reproduced here with kind permission.