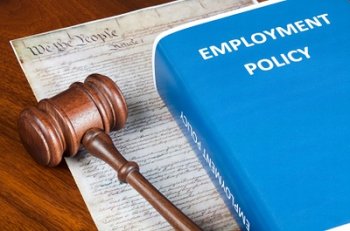 The Christian Legal Centre's latest 'discrimination' claim follows a familiar pattern – but its use of dissembling tactics shouldn't be permitted to manipulate a change in equality laws, argues Terry Sanderson.

So, here we go again. Another evangelical Christian is claiming that she was unfairly dismissed from her job just because she talked about her religious beliefs at work. Her employer, Newpark Childcare in Highbury, north London, says she was guilty of "gross misconduct." The case will now be heard by the Watford Employment Tribunal.

The routine is exactly the same as in so many of the other cases. The Christian Legal Centre is backing Sarah Mbuyi and has put out a completely one-sided account of the case in which Ms Mbuyi is portrayed as a poor Christian, hounded and persecuted because of her religion.

The Daily Telegraph then reports the matter entirely from the account provided by the Christian Legal Centre's ace propagandist Andrea Minichiello Williams. There is not a word from the employer or the woman who supposedly complained about Ms Mbuyi's behaviour at work and no attempt whatever to put the other side of the case.

In this way, even before a word has been spoken at the tribunal, Ms Mbuyi has been enrolled into the gallery of victims of "Christianophobia" that Andrea Williams has almost single-handedly created.

But let's not forget – none of the many cases that the Christian Legal Centre has brought to court has succeeded. Nadia Eweida, the BA clerk won a small technical victory at the European Court of Human Rights, but nothing to fundamentally change the equality laws.

And why this continual failure? Because when the facts from both sides are heard, it turns out that it wasn't quite the way Andrea Williams had described it. By that time, of course, the Mail and the Telegraph will have lost interest and Ms Mbuyi — whatever the truth of the case — will be forever remembered – and continually referred to as yet another martyr on the altar of anti-Christian prejudice.

In these initial accounts that Andrea Williams releases to the press – and which the Telegraph and the Daily Mail gobble up without question – there are always omissions, exaggerations and a total lack of input from the other side.

Of course, she knows that the employer is unable to rebut what has been said until the matter reaches court because of privacy considerations.

There is another angle to this present case. The Christian Legal Centre is going to try to strengthen its hand by citing a non-binding resolution (pdf) that was passed by the Council of Europe recently calling on member states to challenge discrimination on grounds of religion – particularly against Christians. The CLC thinks that this will persuade a judge to at last find in their favour and confirm their claims that Christians are being disadvantaged in the workplace.

You'd never guess it from the Telegraph's version, but the resolution says that member states should "uphold freedom of conscience in the workplace while ensuring that access to services provided by law is maintained and the right of others to be free from discrimination is protected."

That does not read to me like a wholehearted plea to give Christians carte blanche at work to promote their religion or give a hard time to colleagues whose lifestyle they disapprove of. Indeed, it specifically states that "services provided by law" must be maintained. That means that the courts were right to throw out the case of Lillian Ladele, the registrar who was sacked for refusing to carry out civil partnership registrations.

The resolution also says that others have a right to be free from discrimination – so refusing services to or harassing homosexuals is also out as far as the Council of Europe is concerned.

Nowhere in the resolution does it recommend "conscience" opt-outs or that the law be changed to give Christians the freedom to make other people's lives a misery.

But this, ultimately, is what the CLC is trying to do. It is trying to create a climate that will persuade politicians that the Equality Act needs to be changed to give them the right to refuse goods and services to people they believe don't live by biblical standards.

They want the right not just to hold their beliefs, but to promote them in the workplace, to impose them on customers and service users and to have special privileges that are denied to everyone else.

The Prime Minister claims to be Christian and recommends that Christians get evangelical about their beliefs. The Queen as head of state is an enthusiastic Christian who uses her Christmas message to the nation to proselytise her faith. Most of the government is Christian; we have an established church that is Christian; Christians are protected in law from discrimination; we have Christian bishops sitting in our legislature as of right; Christian run more than a third of the education system – what more participation in public life do they want?

Actually, what they ideally want is to participate in private life – everybody's private life. They want to make life difficult for "sinners" like homosexuals, co-habiting straight couples, divorcees and anybody else who doesn't lead the upright Christian life they claim for themselves.

I anticipate that this case will go the same way as all the others when the true facts are aired. But if that happens, don't expect the Daily Mail and the Telegraph to report it objectively. They will either ignore the outcome or they will present it as another assault on religious belief by fundamentalist secularists.

If I'm wrong and the CLC score a breakthrough, then we all need to be worried about where this might lead. You can be sure that one small concession will not satisfy these zealots.

The CLC is relentless and has friends in high places. But it must not be permitted to manipulate a change in the equality laws by the use of these dissembling tactics.