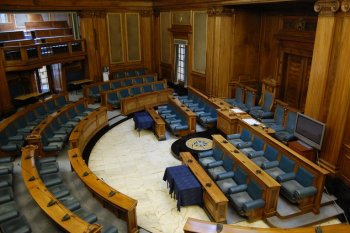 You may regret clicking this link. If you did you may well have heard 10 seconds of silence. The recording is of the notorious Mosquito device. It sends a high pitched sound which can be painful to young people but is so high pitched that most aged over 25 can't even hear it. Some people (mostly over 25) like these devices because they deter young people from loitering in town centres. But really they, like deliberately uncomfortable benches, are an imposition of one group's values – that town centres are for shopping, not a public space for people to 'loiter'.

Sometimes when the message of exclusion is subtle enough those in a privileged position don't or can't notice it. On its lowest setting the Mosquito device can be so subtle that young people are not consciously aware of it. They may perceive it as a slight headache or feeling of vague unease. But its message is still the same, from the privileged to the marginalised: "don't feel comfortable, don't loiter, you are not welcome here."

A similar message is currently being sent out by a small group of religious enthusiasts in Parliament behind the Local Government (Religious etc. Observances) Bill – with the full support of the Department of Communities and Local Government.

The Bill, which is on course to soon receive Royal Assent, will allow a range of local authorities in England (from town councils to waste management authorities) to make religious observance (or observance connected with a philosophical belief) part of the official business of their meetings.

I bring up the Mosquito device as an illustration because saying that some people are negatively affected by its sound, that some are not and that some may even like it is not to pass any subjective or moral judgment on the sound itself. Describing the effect of a Mosquito device to those who can't hear is difficult. In such cases analogies can be useful: if people find one situation involving privilege/discrimination acceptable would they find a similar situation involving a different form of privilege/discrimination equally acceptable. If not why not?

Imagine you worked in an office with a bizarre ritual. Your working day is nine to five. But every Monday starts with a staff meeting beginning with five minutes of sexist jokes led by a friend of the boss. Would we find this acceptable?

Imagine that after years of putting up with this and attempting to persuade your colleagues to abandon the practice, you object and secure a court ruling that the practice must stop – only to find that a petulant group of sexist joke enthusiasts are unhappy with what they see as a challenge to their male privilege. They try everything they can to change the rules to allow the practice to continue.

You're told it's always been this way. You're told no one has complained before, which of course means no one has ever felt comfortable complaining. You're told by your boss that no one really minds – of course it's best to ask a man if anyone really minds, they're so much better able to judge these sorts of things. Or you're told that the only people who really mind just don't have a sense of humour, that they're intolerant and not the sort we want here anyway. You're told that this harmless tradition can't be the reason women and young people are so under-represented in this work place. If they are so intolerant that they can't put up with five minutes of sexist jokes once a week then maybe they're not the sort of person who's suited to the office.

You're told that the joke session is voluntary and that if you don't like it you can always just switch off for five minutes and if you have to be marked out as 'awkward' by excusing yourself… well that's just something you have to put up with to work here.

You point out that stopping the practice wouldn't restrict anyone's freedom; that staff can still get together before or after work to have as many sexist jokes as they want but that it's inappropriate to impose it in the workplace. You point out that many men and women find these jokes inappropriate in the work place – only to find that the staff newsletter is accusing you of leading an intolerant attack on men.

Of course you wouldn't.

And yet with council prayers we find ourselves in an analogous situation, imposed not in the work place but in the chambers of local government. The issue is not gender privilege but religious privilege.

Communities Secretary and Minister for Faith Eric Pickles was upset by a 2012 High Court ruling that local councils had no statutory powers to summon councillors to prayer. He has given strong backing to the Bill, the latest legislative attempt to resurrect the practice. It's worth reflecting on these comments from the ruling:

"I do not think that the 1972 Act, dealing with the organisation, management and decision-making of local Councils, should be interpreted as permitting the religious views of one group of Councillors, however sincere or large in number, to exclude or, even to a modest extent, to impose burdens on or even to mark out those who do not share their views and do not wish to participate in their expression of them. They are all equally elected Councillors."

There's nothing anti-religious in this soaring municipal rhetoric. It conveys something about the values which underpin local democracy that the proponents of 'religious observances' seem to have missed.

We can point out how absurd it is to start council meetings with religious worship, or atheistic observances, when we don't start meetings like this in any other area of life. We could question the utility in joint waste authorities invoking Jehovah, or how much confidence a fire authority inspires when it needs to call on the guidance of the almighty before business.

But the Bill isn't really about that. It is about a religiously privileged out of touch minority wishing to assert their dominance. Secularist peers did well to ensure the provisions in this Bill were scrutinised and debated – but even after the Bill becomes law, it will remain our secular civic duty to resist the imposition of worship where it doesn't belong. In the public sphere, in local government, in civic life, adherence to particular religions or beliefs is not and cannot be the price of admission.