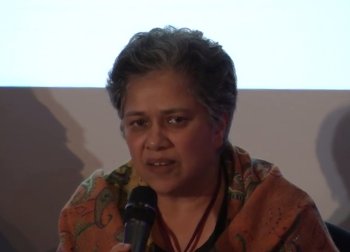 Gita Sahgal argues that opposing religious fundamentalism is not a distraction from 'real' politics - the demands of social justice and civil liberties - but a pre-condition for achieving them.

The conference on Sharia Law, Apostasy and Secularism on February 7th 2015, was intended as a celebration. Clear and decisive victories are rare in the work of our emerging coalition. Forcing two major professional bodies Universities UK and the Law Society to rescind bad advice (permitting gender segregation and promoting so called sharia-compliant wills ) were clear wins for secular principles. The withdrawal of their guidance in both cases was a sign that extremism can be checked by invoking human rights, rather than by suspending them.

At the Secularism Conference in October 2014, Caroline Fourest had described the struggles of a small magazine called Charlie Hebdo that had reprinted the Danish cartoons. The international press who came to interview the journalists and cartoonists were frequently unsympathetic. British journalists, she said, were invariably the worst.

By February 7th, it had become a tragic necessity to combine our celebration with a tribute to Charlie Hebdo and all the many people who had lost their lives in defense of freedom of conscience and the right to offend. Maryam Namazie spoke eloquently - showing cartoon after cartoon from Middle Eastern artists.

The roll call of death that we heard throughout the day was a reminder that opposing religious fundamentalism is a dangerous political activity. It is not a distraction from 'real' politics - the demands of social justice and civil liberties - but a pre-condition for achieving them. The right to apostasy is the most fundamental of all freedoms in a religious dictatorship. As Terry Sanderson, President of the National Secular Society pointed out, apostates are dangerous because they send out a message, "You can be one too". In countries that promote terrorism abroad, apostates become the terrorist at home - subject not only to persecution, but also the death penalty.

In a new report, Human Rights Watch says that Saudi Arabia has specifically declared apostates to be terrorists. The HRW report concludes: "Provisions of Saudi Arabia's new terrorism regulations that deny any ability to exercise basic rights of peaceful assembly, association and expression greatly exceed any notion of justifiable restrictions."

Although the left and many human rights activists have sprung to the defence of many terrorist suspects, they are often less likely to embrace atheists, none of whom have propagated a murderous ideology. Instead, atheists and artists are the ones being labeled 'extreme'. Hardly surprising that many conference participants were signatories to a sharp statement addressed to the left and far left, "We are being slaughtered by your secondary enemy."

By 'coming out' the young apostates speaking are doing that most dangerous of things - making themselves visible - individually and as a community. Some grew up in Britain, others arrived here and were dismayed by what they found. They gained, they said from the example of Maryam Namazie, finally knowing that they were not alone.

The panel on apostasy, composed of Iranian, Libyan, Moroccan, Somali and Sudanese speakers, demonstrated that coming west was not an easy solution either. Imad Iddine Habib, who founded the first Council of Ex-Muslims in a country where Islam is the state religion, described how political parties in Morocco refused to allow their group space in their offices, and how they had fought numerous different political tendencies across the political spectrum. Inevitably he was labeled an extremist. He talked about how secularists also instrumentalise religion to gain votes and was shocked by seeing that British Islamists and humanists were working together in Britain, "I feel betrayed by East and West."

Nahla Mahmoud described how a campaign against her had been conducted by an Islamist member of the Liberal Democrats. Even though being called 'murtad'- apostate and 'kuffr' - unbeliever, are epithets that could be a target on your back, ex-Muslims have often been denied any protection by the police. Community surveillance meanwhile continues as individuals feel emboldened to reinforce what they see as 'sharia' precepts. Ramin Forghani described being told he shouldn't eat 'haram' food, and expressed his disappointment at Britain's silence over Raif Badawi.

Reza Moradi, in one of the few lighter moments, said that when he first arrived and was studying English, he was asked to tell a joke. He responded with one about Mohammed, "the sort Iranians tell every day", to the consternation and disapproval of his English teacher.

In my talk, I explained that the roots of the campaigns to promote 'sharia' principles go well back before the twentieth century and cannot be explained simply by the blowback of the War on Terror. The banning of music and constant surveillance by CCTV cameras monitoring full time hijab wearing by little girls, even in private, described by Aliya Saleem, are aspects of a religious education in which austerity is enforced by technology. The deliberate starving of the human spirit which purifies the person, is an aspect of fundamentalist Islam designed to destroy its traditional music, and cultural norms.

Notions of purity, underpinned Somali attitudes to the outsider as well. Amal Farah described how Somalis see themselves as a Muslim nation and refer perjoratively to outsiders. These concepts reinforced in the literalist background she grew up in and informed attitudes to FGM and women's sexual pleasure. But her description was also a reminder that this was no timeless religion, but one under relentless assault to tighten up, and to introduce more extreme dress codes and other practices as Somalia suffered under war lords, the Islamic Courts and later al Shabab.

Most of those who spoke were embedded in other movements for democracy and justice. In less extreme circumstances, they may well have been more active elsewhere, and indeed most of them are. This is a movement, in which rebellion against god is not an end in itself but a symptom of a wider search for justice. Peter Tatchell, who is not only one of the longest surviving campaigners against fundamentalism and a signatory to the Manifesto for Secularism, but also a Green Party spokesman. Rumana Hashem is an activist on a range of environmental issues, and at the conference she spoke of the murder of Anjali Deb Chaudhury, a Hindu teacher of Nursing in Bangladesh, for upholding her institution's policy against the wearing of burqas. Some Hindu sources alleged that the reason behind her murder was that the students of the Jamaat e Islami were determined to enforce their 'Hijab fatwa'.

The historic role of the Jamaat e Islami figures large in my own account of the lineage of the Paris murders - of Charlie Hebdo workers and Jews in the supermarket. In fact, the state of Pakistan's, enthusiastic prosecution of blasphemy and its role in genocidal violence are the hidden background of the anti-Rushdie and Jyllands- Posten campaigns. They can only really be understood with reference to the role of the Jamaat e Islami and the state's favourite jihadis the Lashkar e Tayyaba.

A strange thing happened during the course of the conference. Secular conferences run by atheists can be difficult places for believers, as Yasmin Rehman found when she spoke to her ironically titled, "Sometimes It's Hard to be a Muslim". Her central point that she is a Muslim and a feminist, but not an 'Islamic feminist', was misunderstood. Inevitably, she was called on to justify various verses in the Qu'ran. But then the unexpected happened. Maryam Namazie jumped up to defend her. This movement she explained is one against the religious right. Addressing ex-Muslims, she said, "Religion has no meaning unless it has power". Some atheists were bigots and some believers were secular. The principle that we are trying to establish is that religion is a matter for your conscience, you do not have to justify practice or belief that doesn't relate to public policy or private discrimination.

But that doesn't mean there was a fear of discussing that the root of violence and discrimination may well be in the text itself . Magdulien Abaida discussed the different verses that justify apostasy, and the different verses in the Qu'ran of Medina versus Mecca. In her view, the narrative of ISIS is firmly rooted in the verses of the Qur'an with its justification of slavery, jihad and other discriminatory and violent concepts. For saying so, she often gets dumped on from a great height. Yet her prescription for the future would be that Muslims look carefully at their verses and firmly reject and modernize their religion.

Ex-Muslims have no illusions of how hard it may be. But for the moment, they have a created a more welcoming space for secular Muslims than most Muslim identity based organisations. As a contributor from the floor, trying to create consensus said, "we think of religion as inherently political because we were not allowed to see it any other way. If you didn't grow up in Iran you will think differently."

The work identified at the conference was almost overwhelming - and it was not exclusively about Muslim fundamentalism. Pragna Patel mentioned that the Christian right has occupied the debate on abortion restrictions relating to sex - selective abortion. Chris Moos reported on his research on whether universities were monitoring whether gender segregation was still occurring. His conclusions that many universities had no policies, and others were doing little, was not reassuring. Maryam Namazie said, "People are not my enemies, it is the religious right who are my enemies." And "If we are going to win, we have to represent humanity, if we are going to win, we have to go beyond labels, we are facing a brutal fascist movement".

Movements are built when those who are under attack refuse to be the victim and stand for all. Movements are built when people lose their fear and stand up. I believe that we should stop despairing of the left and criticising their absence. We are an anti-fundamentalist progressive movement. And it is this extraordinarily diverse movement that will produce a better account of the possibilities - as well as the problems - of religion.

Gita Sahgal was reporting from the Conference on Sharia Law, Apostasy and Secularism held in London, 7 February 2015.

This blog originally appeared on OpenDemocracy.net. The views expressed in this article are those of the author, and may not reflect the views of the NSS.

Gita Sahgal is a human rights activist, the founder of the Centre for Secular Space and a Honorary Associates of the NSS. The views expressed in our blogs are those of the author and may not represent the views of the NSS. You can follow her on Twitter @GitaSahgal