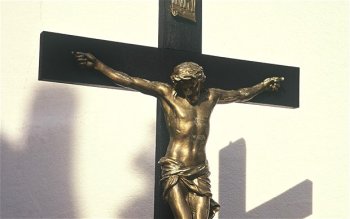 The airline industry has had more than its fair share of tragedy recently, with the loss of many lives and many bereaved families and friends. The Air Malaysia MH370, Air Asia Flight 8501 and the more recent TransAsia crash have all reminded us of how precious life is.

Amid the despair around the second of those disasters in December last year, one man at least found some immediate cause for comfort. A Scottish Reverend was online within hours of the crash to pose the question "Is the Christian immune from plane crashes?" According to this Reverend, Christians "are sustained by the Word of God" and although not in fact immune from disaster, "know that nothing that happens to us is random and God uses all things for the good of those who love Him." And at the cost of the untimely demise of those who are massively indifferent to Him, it would seem! The Reverend later qualified this by saying that God did not actually crash planes Himself, but "is taking these random events and weaving them ultimately into something beautiful". But not for atheists apparently – the Reverend further concluded that the lives of any atheists on aeroplanes, or anywhere else, are "random and ultimately meaningless".

This was the Reverend David Robertson of the Free Church of Scotland, who recently received the accolade of being one of the UK's most influential Christians for "highlighting the flaws in secular lobby groups" and is a Director of Solas, the Scottish Centre for Public Christianity (charitable purpose – the advancement of religion). So his comments above should be considered in the context of a man with a high public profile as a mouthpiece for Christianity. Some have described him as a new John Knox, and indeed his church continues with its idol worship of that original scourge of Catholicism. This reincarnation after the death of the first Knox nearly 450 years ago loathes secularists and everything we stand for. Forget 'that monstrous regiment of women' so excoriated by the original Knox – this new version's repeated trumpet blasts are about the monstrous regiment of secularists! We are usually indifferent to who leads religious organisations in Scotland, but David Robertson is a frequent and noisy critic of ours and persists in misrepresenting us, no matter how often his deceits are pointed out to him. Since he believes the biggest threat to Christianity is secular humanism, we are entitled to defend ourselves so here are the recurring themes in his criticisms of us.

First, Reverend Robertson never fails to describe us as militant, fundamentalist, extremist, fanatical or aggressive. Every secularist is by default an atheist and is apparently out to 'persecute' Christians at every turn. There are no religious secularists in David's world, which will doubtless be a shock for our friends at British Muslims for Secular Democracy. Christian primacy and supremacy in all things is what he demands, to defend against the 'militant secularists' whom he alleges want to drive Christianity and its heritage, not just its privileges, out of the public square and out of Scotland altogether. I know of no secularist who wants that, never mind anyone actively campaigning for it. Our own Secular Charter by which we operate says nothing about creating 'a Godless dictatorship in the Brave New World of modern Scotland.' I don't think I've misunderstood it.

Second, we are accused of denying Christians the right to raise their children in their Christian faith. In one Facebook debate, he said he wanted the Scottish taxpayer to fund a Christian education for 'Christian children' in state schools. I disagreed as I don't believe it's the function of state education to fund indoctrination of children in one religious ideology, although I support education about religion. To me, this was a disagreement between two people about the nature and purpose of taxpayer-funded education, but to the Reverend it was an example of a secularist denying him the right to raise his children in his faith and so 'persecuting' him.

Third, the Reverend makes much about Christian school provision in Scotland going back to the days of Knox, even writing to fellow Christian Alex Salmond in 2008 asking "Can we have our schools back?" He seems to think that the part of the education system the churches handed over to the State in 1872 was an inclusive and wonderful thing, but we know it was of poor quality, riddled with infighting between Christian sects (his own being one of them) whose inspection regime was more concerned with enforcing orthodoxy than anything else. The Reverend called for yet more dangerous apartheid in our schools by suggesting that atheist parents could start their own secular schools in a celebration of true diversity, as if segregating children and teaching them conflicting sets of values could lead to happily tolerant adults. He has stated bluntly that "the state education system should not be used for the social engineering experiments of the secular humanists", but of course demands just as bluntly that the same system is used for the social (and religious) engineering experiments of Christians.

Fourth, he criticises others as sectarian while not considering himself guilty of the same crime. He took offence to a description of Labour leader Jim Murphy as a 'religious fanatic', and duly whipped up a press campaign to claim Murphy was being targeted purely because of his Catholic faith. This was a crude attempt to exploit Scotland's Protestant versus Catholic sectarianism to drag secularists into the mire. However, Reverend Robertson has no problem with his own frequent reference to secularists as aggressive, militant and extreme. We are fair game to be targeted for our philosophical stance. Ironically, the Reverend leads a church that denies being sectarian when it proclaims Roman Catholic doctrines such as "Maryism" are "unbiblical", and "the impact they have on millions worldwide as a subversion of Apostolic Christianity are perilous to the faith of men and women". When Pope Benedict visited Scotland in 2010, the retired principal of the Free Church of Scotland College mocked "secular humanist Scotland" for being "suckers for funny costumes who love to see old men dressed in ancient Roman togas". Yet when a secularist refers to a Catholic as fanatical, the Reverend declares he is standing by "his Catholic brothers and sisters" against a 'secular attack'.

Finally, Reverend Robertson maintains that the Scottish Government has been ignoring Christians of late, which means Christians have been losing some arguments and they don't like it. An example was the Scottish Government's consultation on same-sex marriage. David Robertson called for a voter referendum, arguing among other things that same sex marriage would violate the rights of heterosexual couples under European and UK law. The Scottish Government conducted a consultation, the outcome of which many Christians persisted in misrepresenting as if it were indeed a 'Yes or No' referendum. The Free Church case was invited and heard, but its argument was not good enough – not the same as being ignored. However, the victim narrative held sway and we were told Jesus was being banished from the public square. But then the Reverend also says there is no room for Jesus in much of the Church, especially the Church of Scotland which he says has many atheists in its pews. By that we presume he means Christians who don't share his orthodoxy or (Heaven forbid) perhaps even Christians who support secularism. On one hand he enjoys mocking the Kirk for playing 'Fantasy Church', on the other he cries crocodile tears lamenting that the national church should be in such a parlous state.

So there you have the substance of David Robertson's attacks on secularism, atheism and secular humanism. There is one more thing people should know about David, and that is his claim to be the living proof that people can be healed in answer to prayer. A very lengthy post on his blog (you'll find an edited version here) describes his near death experience from a serious illness, and how just when he was at his lowest and doctors could do no more, a call to prayer was broadcast by his church. From then on, he started to get better and eventually made a full recovery. A true test of the efficacy of prayer would surely be if people who were seriously ill received no medical treatment at all for their ailments, to see if prayer alone worked to heal them. But as David Robertson explains, he thanks God for "giving us science and for all the means He uses, including doctors, nurses and the NHS."

I have no idea why David's God would wait thousands of years into the development of the humans that He allegedly created before allowing them to discover the drugs and procedures (eg antibiotics, anaesthetics, blood transfusions) that treated David Robertson's condition so successfully. He must be relieved at being born in the mid-20th century rather than mid 19th. He is entitled to his beliefs and to express them, but I can't rationalise why prayers should deliver clergy from acute illness but be so ineffective when uttered by believers in crashing aeroplanes. Knowing David's God is about to weave your imminent and violent demise into 'something beautiful' is scant consolation. I hope I am never in that position, but in my case it won't matter – after all, my life is 'random and ultimately meaningless'!