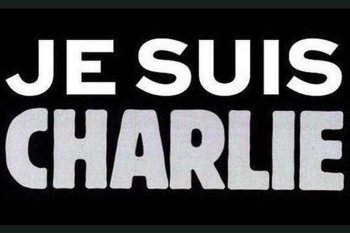 Restrictions on criticising or satirising religion, especially Islam, have hugely increased since Salman Rushdie was burned in effigy and driven into hiding over The Satanic Verses in 1988. That he was reviled and those attempting his murder not even charged showed Governmental contempt for freedom of expression.

The abolition of (Christian) blasphemy in England in 2008 became irrelevant with the introduction of protection from criticism or mockery of all religion when 'religiously aggravated offences' were criminalised with a seven year tariff. These offences dangerously go beyond protecting individuals to protecting their beliefs.

The extremists try increasingly to terrorise us into silence and often the state conspires with them, blaming the victims for 'bringing it upon themselves'.

But in an open society, free expression is more important than any religious dogma. Without free expression, our democracy will not function, as it does not in many Muslim countries. Religion will be permitted to go unexamined, even when it is a threat to life and limb.

We must stand together and refuse to be cowed into silence by the threats of terrorists and the cowardice of politicians. We cannot, as a society, place religion beyond the reach of satire or critical examination.