GP Taylor: Why faith has no place in our schools 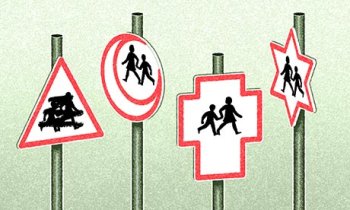 As a priest, I was always suspicious of the new parent lurking at the back of church clutching the hand of a four-year-old child. You knew that within a couple of weeks the application forms for the local faith school would appear and once signed you would never see them again.

The village where I lived had a great school, but there was a section of parents who wanted their children to attend a faith school and would do anything to make that happen. They would even endure months of church services and even Confirmation to secure that magic signature on the form.

Somehow they felt that faith schools offered a far better deal and were the nearest thing to private education without having to pay.

Perhaps they were right, but it is very easy to offer a higher standard of education when you are a selective school.

The issue is that faith schools attract the middle classes, fewer children on free school meals and are not encumbered with the problems of a difficult catchment area. They often attract the best teachers because they are easier to teach in and have better standards of behaviour. This isn't down to some magic formula that the spirituality of the school calms the children, it is the fact that they, on the whole get brighter kids from better off families with supportive parents.

The trade off for parents is that to get this superior education they have to allow their children to be indoctrinated into the traditions of that particular school and the faith on which it is based. In a modern and secular society this has many potential dangers.

The trouble with many faiths is that they are quite divisive. By their very nature, they work on the principle that they are the right and only way to God and every other way is wrong or flawed.

Many teach beliefs that are contrary to the views of the society in which we live. How can a faith school teach that all faiths are equal when the theology of that faith demands its followers to believe that they are the only true way to God?

Christianity and Islam both state this very clearly and don't believe anyone who says that us not the case.

Homosexuality, creation, gender separation and contraception are just some areas where these schools are at odds with the world. In some schools, children are taught outdated views on God that verge on the medieval.

But is it right to have any religion in school at all? Under the Education Act, each school is required to have some form of collective act of worship. Children coming together to pray, sing or act out a faith story. Perhaps this was acceptable thirty years ago, but it's place in society has now gone.

Only seven per cent of the population attend church on a regular basis, so why is it that schools up and down the country should act as recruiting agents for God?

This is an outdated and quite farcical concept. Many teachers find it difficult to maintain a balance in their approach and some find the whole idea very uncomfortable.

I believe that the only place for faith in our schools is as a subject delivered on the same level as maths and science. It is important that it is still taught and should be compulsory for every student to learn, but as a factual and not spiritual discipline.

Religious beliefs should not be forced upon anyone and should always be discussed in an age appropriate and sensitive manner.

Religious practice in schools often has a detrimental effect on students and pushes them away from exploring the concept of God rather than opening their minds to it.

In the age of rising fundamentalism, it is important that any aspect other than the academic study of faiths is stripped from our education system. Students should be free to learn about perceived beliefs in an environment of critical study and analysis.

Religious dogmas and outdated cultural concepts have to be allowed to be challenged and not received as absolute truths.

Secularism in schools will become a necessity for future generations. Schools will have to become places of intellectual safety and out of the control of religious groups with vested interests.

Faith must become a subject and not a means of pupil selection and prayers and worship put back into the hands of those who seek to propagate belief well away from places of education.

GP Taylor is an author and former Anglican Priest. The views expressed in this article (first appeared in the Yorkshire Post and is reproduced here with the author's kind permission) are those of the author and do not necessarily represent those of the NSS.