BBC Panorama, “the battle for British Islam” and the nonsense of “peaceful” or “violent” Muslims 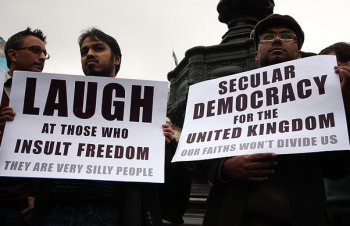 NSS communications officer Benjamin Jones argues that the problem of Islamism is obscured by politicians and others simplistically categorising Muslims as either 'peaceful' or 'violent'.

On 12 January, BBC Panorama featured British Muslims campaigning for a secularised, liberal or non-literalist interpretation of the Islamic faith. John Ware reported the view of reformers that radicalisation is the product of "an extreme but nonviolent ideology" that helps "push Muslims into the arms of violent extremists."

The non-violent majority of Muslims are lazily and meaninglessly described as 'peaceful.' Politicians should instead be adopting Maajid Nawaz's much more relevant criteria of 'liberal' and 'secular.' Doing so will aid the fight against extremism.

As BBC Panorama chillingly showed, whilst most British Muslims are peaceful, many are simultaneously anti-secular, and opposed to liberal/British/secular values (including the freedom to change or leave religion and freedom of expression, particularly relating to the Prophet Mohammed).

The unenlightened view that the law should intervene to prevent certain acts of blasphemy is extremely widespread among British Muslims; as polling after the Danish cartoon riots showed; 78% of British Muslims at that time said that the publishers of the Danish cartoons of the Prophet Mohammed should be prosecuted. Describing Muslims who hold this view as 'peaceful' does not really tell us anything meaningful about their ideology or their politics, and it obscures a deep malaise in society.

The 'peaceful' description allows a complacent evasion of the underlying problem. How often is this done by politicians out of unwillingness to confront the problem, out of fear and for political expediency? Without acknowledging a problem, it cannot be solved, and this lazy and spineless evasion robs the reformers within Islam of the tools and support they need.

A great many within British and Western Muslim communities do feel that the Prophet Mohammed should be protected from criticism, satire, ridicule or even simple depiction. Alarmingly, for many, polls show their strength of feeling on this matter extends beyond a social prohibition on depicting Mohammed, (akin to politeness); though clearly it does not extend as far as support for the undertaking of actual violence.

There is a broad continuum of belief on this matter; which ranges from the secular view that no-one has the right to not be offended, then that the cartoons are offensive but should not be prohibited by law, through the dangerous view that the law (in the interests of social cohesion and/or decency) should ban depictions of the Prophet, ending finally with the extremist commandment that those who make images of the Prophet should be killed, either under the power of the law or at the hands of terrorists.

There are those within and outside Islam who fit on this spectrum. Some non-Muslims favour the 'social cohesion' or 'good manners' argument, exemplified by Pope Francis in comments for which he has received unprecedented criticism. Some even go to the next rung on the apologist ladder. George Galloway, speaking at an event billed as a 'free speech' rally, told his audience that "for the sake of social peace, for the sake of unity in our society we have to demand from our government the protection of the prophets from obscene and pornographic provocation and in parliament I intend to fight for that."

This is an explicitly anti-secular ideology, and one which secularists (by which I include anyone who doesn't want to see the laws and diktats of any religion imposed upon all of society) must grapple with unless we wish to see the clock turned back hundreds of years on the progressive triumphs on the expansion of free speech and the right to blaspheme. This rampant anti-secularism is widespread; and blithely repeating that 'most British Muslims are peaceful' will not help us deal with, or win, the ideological conflict.

It also sets a very low bar. Is 'peace' alone really enough to foster a strong, functioning society? Or must there in fact be a deeper foundation of shared values, (regardless of whether we call them universal, British, secular, liberal, or democratic values). There is a large block of anti-secular thought, from which terrorism emanates, and which poses serious problems to those who campaign for an enlightened, secular, free society.

We need to find out what proportion of British Muslims are opposed to core, secular values, most noticeably free speech where religion is concerned, and the freedom to apostatize. The overwhelming majority may not ever act upon this view, much less act violently, but it is clear that a campaign for 'hearts and minds' needs to begin at home. More polling on the opinions of British Muslims would help ascertain the scope of this ideological gulf.

Anyone who wants to use the force of the state to protect their feelings is a part of the problem; a problem we mask when we limit our discussion with an arbitrary and meaningless delineation of 'violent' and 'peaceful' Muslims.

There is a trenchant strand of anti-secularism amongst 'peaceful Muslims', and we must raise the bar higher than the mere absence of violence.

We are facing our own, unique version of a culture war, and we should get our terminology straight now- so that the secular Islam proposed by reformers like Sara Khan or Maajid Nawaz is strengthened and nourished (both from within the faith and from outside).

BBC Panorama "The Battle for British Islam" can be viewed here. It first aired on 12 January 2015.