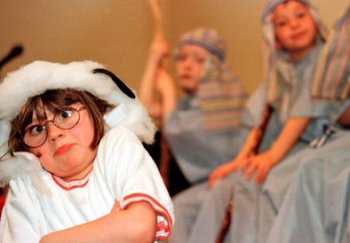 After it this week emerged that some school nativity plays are losing their religion, Stephen Evans argues that schools should be free to innovate and have a bit of fun with their festive plays without po-faced nativity police telling them they can't.

Predictable grievances were aired this week when a Netmums poll revealed that a small of number schools have opted to replace the traditional nativity with Christmas plays that make little or no reference to Jesus. The online survey found that other schools are sticking with the nativity, but with a twist, starring modern characters and featuring less traditional songs, such as 'Let it go' from the insanely popular Disney film, Frozen.

According to Netmums co-founder, Siobhan Freegard, parents are concerned Christmas traditions are being "pushed aside" and claim schools are "under pressure to modernise the story and remove religious figures". Where that pressure is being applied from wasn't articulated.

However, it didn't take long for one caller to a local BBC radio station to blame "political correctness" and "Muslims" for the decline of the nativity – others will no doubt blame the fabled "militant secularists".

But in reality, there is no pressure on schools to abandon the nativity. Some are simply deciding for themselves to do something else to celebrate the midwinter festivities.

Pagan winter solstice celebrations of the longer days to come long predate its adoption by Christians. It was the Romans who first introduced the holiday of Saturnalia, a week long period of merriment celebrated from the 17 December. To this day many Christmas traditions revolve around its pagan origins. It took Christian leaders four centuries to decide December 25 might be a good time to mark Jesus' birthday – so let's not have any more talk about Christmas being hijacked.

But the Christmas nativity, complete with shepherds with tea towels on heads (and hopefully a 'You've been Framed' moment or two) is very much part of our cultural heritage, and if schools want to do a nativity then that should be fine. But pantomime is also an ancient British tradition, so if schools want to do something less religion-focussed, then that should be fine too.

Part of the curriculum is already set aside for religious education. The story of Jesus and his birth is the foundation stone for learning about Christian beliefs, and you're unlikely to find a school that doesn't teach that. So if schools want to use their Christmas plays to do something a little different – a little more inclusive, relevant and even fun (it is Christmas after all) – then they should be free to so without being guilt tripped by those who think Christianity should be pushed in schools at every possible opportunity.

The narratives may evolve, but stories, legends, and myths will endure as an important and valuable way of transmitting values from one generation to the next – and the vast majority of schools will no doubt use their secularised Christmas plays to promote their pupil's spiritual, moral, social, cultural development – but the religious element should always be optional.

Christmas means different things to different people, and if schools want to innovate and have a bit of fun with their festive plays they should be free to do so without the po-faced nativity police telling them otherwise.