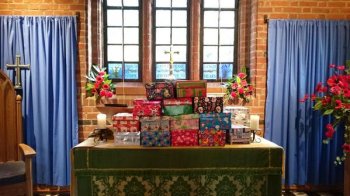 Every year the National Secular Society is contacted by parents upset to discover that a festive charitable project in their children's school is unwittingly making them tools for evangelisation. Alastair Lichten looks at some of their concerns.

It seems to get earlier every year. The first chocolate Santa Clauses are marching onto supermarket shelves, the first seasonal gift catalogues are being dropped into recycling bins and the NSS has begun to receive phone calls, emails and messages from parents concerned about Operation Christmas Child (OCC).

Schools (and often workplaces) are encouraged to promote OCC run by the Samaritan's Purse. On the surface it seems quite nice and is supported by plenty of well-intentioned parents, staff and pupils. Children at public schools of all faiths and none are encouraged to decorate a shoebox, pack it with gifts and maybe a personal note. The shoeboxes are then collected and shipped to children in poorer and developing countries.

What many schools and parents don't know is that the Samaritan's Purse is an evangelical organisation and that the Christmas gifts they have put together will be used as an evangelising tool, alongside promotional, conversion focused, literature to invite the children receiving it to follow up Bible studies. In 2012, in earthquake hit Haiti, the organisation boasted of more than 10,000 children who received a shoe box and completed the follow up course.

Here's a quote from a copy of one of Samaritan's Purse's inserts sent to us by a parent.

"Sin is our biggest problem. We all need to be rescued from sin. Sin is when we disobey God. Sin is when we don't live the way we are designed to live. You can see sin all around us...Sin must be punished. The right punishment for sin is death and to be separated from God and everything good forever. This is called Hell...Can you Believe and Follow Jesus? Anyone who believes him will not die but will have eternal life...Do you want to be a friend and follower of Jesus. If you do, you can speak to Him right now by praying the prayer below..."

Their charitable aim is "the advancement of the Christian faith through educational projects and the relief of poverty".

The NSS has been concerned about the scheme since it was discovered that evangelical Christian literature was being inserted into the shoeboxes. As long ago as 2003, awareness raising by the NSS led to the Co-operative Society and other supporters dropping out. In subsequent years other high-profile supporters such as HMRC and multiple schools have stopped supporting the scheme citing concerns over its effectiveness and evangelical nature. In 2005 an internal memo at HMRC, then the Inland Revenue, stated: "We were informed that people who participate in the shoe box appeal were probably unaware that Christian evangelical literature is distributed along with their gifts and the recipients get follow-up materials encouraging them to participate in Bible study classes."

In the face of such public criticism OCC stopped including their evangelical literature in the shoeboxes. The booklets are now sent and distributed alongside the packages. While Christian organisations are within their rights to raise money and spend it on promoting their faith, we should be concerned when they seek to involve publicly-funded schools in their evangelising efforts – especially given the efforts they go to downplay their evangelical nature.

This year I spoke to an NSS member in Solihull. She had first become concerned about OCC 3 years ago and told her son's school that he would not be participating. Only to be informed that the school had decided to make participation mandatory and pupils would receive 'penalties' for not taking part.

Another parent sent me a copy of a school newsletter which downplayed the evangelical nature of the programme, saying: "The volunteers (at a warehouse the children visited) have to make sure that there are no items linked to any form of religion". The newsletter explicitly claims that shoeboxes are given to the children with no "strings attached!"

Big money evangelical (and Pentecostal) organisations (mainly in the US but to a lesser extent in the UK) feel that the 'culture wars' – their term for resisting the move towards more pluralistic, tolerant and secular societies – has been lost in the West. Many conservative evangelical organisations are increasing their efforts to spread the faith in Africa and other parts of the developing world. Where war, conflict and poverty have left many people without access to education and reliant on aid, some pastorpreneurs see an opportunity for growth.

The scheme has echoes of a colonial style missionary approach. The organisation's language and choice of images on their website certainly don't help. Nor does their record. In 2001 Samaritan's Purse was under contract to deliver US aid to the victims of the El Salvador earthquake. Residents of several villages reported that they needed to sit through a half hour prayer meeting before receiving assistance.

The problem with this approach, apart from its historical links to colonialism and imperialism, is that even when explicit links aren't made between the aid and conversion / religious participation, the link is strongly implied and a social pressure is created. As any salesperson knows giving a 'free' gift alongside an invitation is intended to create a feeling of obligation. Creating the impression that those sending the gifts are all Christian is intended to subconscious link prosperity with Christianity.

OCC is just the seasonal iteration of a problem that is with us all year. In 2013 the National Secular Society published a report into evangelism in schools, mapping the growing problem of external visitors using access to public schools to promote their religious agenda and suggesting ways that this could be challenged by parents, staff and pupils.

Alongside OCC Samaritan's Purse often deliver collective worship, assemblies or even RE classes on the 'true meaning of Christmas' and their view of the Christian nature of charity.

Many schools eager to enrich their curriculum with the participation of external groups remain naïve about the intentions of evangelical groups – and are clearly unaware of the concerns with OCC.

This year James Carrol, an NSS member in Colchester, joined other parents to raise their concerns over their children's (CofE) school's involvement in the scheme. After reviewing the parents' research into the organisation the headteacher cancelled cooperation with the scheme and is now looking for a secular alternative. Given that it was a governor level decision to invite OCC, we are hopeful that the governors will support their headteacher's decision and exercise greater diligence in future.

However, many parents, pupils and teachers wishing to raise valid objections about the manipulative nature of the shoebox scheme probably stay quiet in fear of being represented as Scrooge-like figures. It's unfortunate they're being put in this position.

If you would like to support a charity this Christmas, there are many alternatives to the Samaritan's Purse who may make better use of your donation and don't come with the proselytization baggage.

Sending shoe boxes full of gifts is a horrendously inefficient way of making charitable donations but there are many other ways your school, club or office can help those in need this Christmas by supporting schemes, such as those run by Plan UK, who work with the world's poorest children, Save the Children, who carry out vital work saving children's lives across the world, and Good Gifts who provide practical help directly to those in need.