Mission creep in the anti-war left 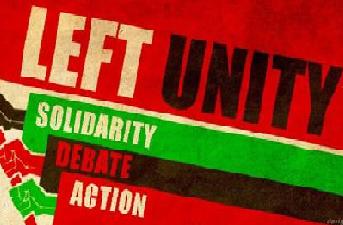 Video has emerged of the Left Unity political party voting on whether to endorse the Islamic State. Although the amendment was easily defeated, Benjamin Jones argues that this is just the latest flirtation in a long courtship between elements of the British far left and the Islamist far right.

At a conference of Left Unity, which describes itself as the "new party of the left" in the United Kingdom, an amendment was proposed (and defeated) which would have called for an end to nation states in the Middle East and their "replacement by a Caliphate". The rejected amendment renounced the "claim" that most of the people under Islamic State occupation "only tolerate IS rule because of extreme coercion", and described the Caliphate as the result of Muslim "emancipatory, anti-imperialist aspirations."

The motion supported calls for a caliphate, "insofar" as that meant an "inclusive, diverse polity" and urged Left Unity to "distance itself" from the use of "intemperate" language like "terrorism", "evil", "fundamentalist", "murderous" and "genocidal" in discussions and reports about the Middle East. The amendment heralded the "internationalist potential" of an "authentic Islamic society".

Tabled on a motion called a "socialist response to ISIS", the draft motion also considered the "progressive" virtues of the caliphate and its potential benefits as a "stabilising force" in the region. The proposer and seconder claim that "ignorance" and "prejudice" of words like "caliphate", "sharia" and "jihad" are part of the Western world's "Islamophobic cultural baggage".

The real nub of the amendment's argument is the authors' claim that the Caliphate, "based initially on Salafist jihadist ideology and Sunni exclusionism", would "break the imperialist settlement of Versailles and threaten Western control of oil". This point about borders comes up again and again. The authors eagerly embrace the possibility (and indeed the reality) of the Islamic State smashing down the borders of Skyes-Picot and reshaping the 'Imperialist' settlement formed when the Ottoman Empire fell in the crucible of World War One.

This position is an extreme example of an all too common piece of reasoning that begins with a distaste for Western military adventurism abroad, before sliding into a hatred of 'the West' in general, culminating in some cases (as it has here) with an association or even sympathy for the West's enemies. George Galloway is exhibit A of this phenomenon. As Galloway himself put it, "I am not with the Syrian regime. I am against their enemies because their enemies are worse than them. I was not with Saddam Hussein, I was against his enemies because his enemies were worse than him".

A great many opposed the Iraq War (and military intervention in general) for important points of principle, but among a hardened core on the left (and some on the American isolationist right) this position has degenerated from a principled stand against war into a warped support for the enemies of the west. It is a self-destructive manifestation of the saying that 'the enemy of my enemy is my friend'. Many have undergone this unlikely metamorphosis from opponents of war in principle, to (rhetorical) supporters of the West's adversaries.

For many, a lifetime opposing Western colonialism abroad and free market capitalism at home has led to such embitterment that they cannot recognise the far greater evil of Islamism (manifest in this case in the Islamic State) and make common cause with the centre-right to resist it. This slide from pacifism to anti-Western rhetoric and the embrace of the West's adversaries is a pernicious mission creep, as this hard left core jettisons its values in favour of its doctrines.

Sadly, this ideological strain is far more interested in denouncing the imperial efforts of long-dead Europeans than they are in resisting the current, ruthless imperialism of the caliphate-builders.

Since the Iraq War, many in this leftist fringe have suddenly discovered an intense love of stability. As noted above, the authors of the rejected amendment believe that a caliphate could "only be a stabilising force" for the region. We are told, and expected to believe, that a "political system based on Islam" would mean an "accountable executive, an organised judiciary, representative consultation, [and] the rule of law and citizenship". The most cursory examination of Abu Bakr al-Bagdadi's regime finds an executioner, not an executive, a judicial system which is organised only insofar as death squads require commanders, the rule of law where 'God's' law is absolute and man-made law is haram, and a doctrine of citizenship which rewards applicants with sex slaves.

As for "stability", this was also an argument against the removal of Saddam Hussein. It was in fashion for Baathist Iraq to be seen as a 'necessary evil' for the region, where Saddam Hussein was said to be, 'regrettably', the only thing 'holding Iraq together'. Coming from Henry Kissinger or the realpolitik crowd this line would be one thing, but it requires an extraordinary capacity for cognitive dissonance to seriously hear and accept Marxist revolutionaries espouse the virtues of "stability"- whatever one's own view on intervention is.

This fringe element is so desperate to oppose the west that they now clothe themselves in the language of "balance of power", "order" and "stability". Their ideology is as muddled as it was when the wall came down, and their political instincts as bewildered as their ideological predecessors were when Stalin signed the Molotov-Ribbentrop pact.

Another odious clause of the amendment tells us categorically that democracy is "nowhere near the agenda of any social forces in Iraq or Syria". The amendment makes quite clear that democracy is only to be the preserve of the West, that Muslims do not have democracy on their agenda, so therefore democracy ought not to have Muslims on its. On the contrary, 60% of Iraqis voted in the last presidential election earlier this year, in spite of the very real threat of terrorism; a percentage that should make us blush with embarrassment when our political analysts speak of rain 'depressing turnout'.

Many on the left have gone to great lengths to disown this type of capitulation in all its forms, whether it is student unions segregating events by gender, or universities obstructing discussion of inconvenient subjects, but there remains a stubborn rump that cannot – will not – ever side with the West. The infusion of identity politics into our political language has complicated matters even further, as criticism of Islam or Islamic law is seen (or knowingly mischaracterised) as 'Islamophobic'. In reality, the differences between the British left and the British right are insignificant compared with the theocracy metastasizing across Iraq and the Levant, I only wish that the brand of anti-imperialism would challenge the Caliphate in the same strident, unapologetic way it trashes the late British Empire.

The conference motions and amendments amounted to 65,000 words, and this document can be read in its entirety here.

In an another amendment, which saw broad support in the room and from the chair, the Left Unity conference voted in favour of text which recognised the rights of the Kurds to defend themselves against ISIS, though it begrudgingly noted that the weapons and air support needed to do this would have to "come from the likes of Britain."