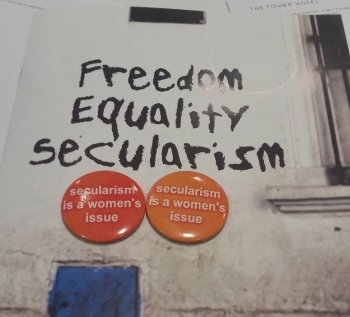 Last weekend's conference organised in London by Maryam Namazie and her colleagues wasn't like any other conference on secularism I've ever been to. It was a truly international event that made everyone there feel that they were engaged in a momentous worldwide call for change. It was just a start, but the passion generated was the kind that can move mountains.

To start with, there was a majority of women among the 250 delegates. They had come from all over the world, bringing with them some horrific stories of suffering at the hands of religion.

Many speakers from Muslim backgrounds told of the persecution and discrimination and the sometimes heroic resistance to it. Wherever there is theocracy it seems there is also resistance. Individuals and groups, very often women, very often religious themselves, who are seeking to create a secular space where they and their communities can be free to make their own choices and exercise their own beliefs.

It was right that women were the dominant presence at this conference, for it is women who are the most numerous victims of theocratic regimes.

As was pointed out over and over by one speaker after another it is women who are enslaved and made subservient in these societies, women who are made to don restrictive clothing, women whose freedom of movement is most curtailed, women who must suffer the violence and intolerance of arrogant clergy.

And here we were surrounded by extraordinarily courageous women who were prepared to stand up and protest, and sometimes put themselves at risk of imprisonment or worse for their efforts.

At times over the weekend I feared what the consequence of their dissent might be. In some of these fascistic religious countries human life seems cheap. Those who dare to defy the authorities are disposed of as if they were nothing.

One speaker, told us she experienced some nerves before her speech – on women, religion and the religious-right. The last time Magdulien Abaida spoke at a conference in Benghazi it was interrupted by members of Islamist militia group who subsequently abducted her from her hotel room.

We were told of the people who had been murdered, tortured, silenced and had their rights removed just to enable religious hegemony to continue.

Some women recounted the way that men, in the name of their faith, sought to control every moment of female lives – what women eat, when they eat, what they wear, who they can love, how they can love them – even how they go to the toilet.

With this level of control, women cease to be functioning human beings and become little more than sex slaves and baby-making machines.

The conference confronted us with these horrors, not just as statistics, but as human faces – real women with real tears, but also with real courage and a determination to bring change.

Over and over the point was made the secularism could mitigate some of this suffering. Human Rights could replace oppression and fear.

But none of these ideals could be achieved without democracy, without the will of the people to effect that change.

When someone asked me how many truly secular countries there were in the world, I struggled to get beyond single figures. And I made the point that secularism should not be regarded as a cure-all. It will not stop sectarianism, it cannot dissuade theocrats from seeking power (and using force to gain it, if necessary).

Secularism has to be freely and willingly embraced by the people and that can only be done in a framework of true democracy.

Our job is to persuade people of the value and brilliance of secularism so that they will embrace it when they are asked.

This is a massive job that will have no end, but we should promote the adoption of secularism wherever we can. Whether that is in our national governments, our local authorities or our shared institutions.

Religious leaders will never give up their power willingly. The people have to politely show them the door and tell them to return to their churches and mosques and temples and to stay there.

Only then will the terrible suffering that women have to endure under religious rule be alleviated. At some time in the future all women will be able to participate in the world on an equal basis as men, and secularism is what will make that happen.

Terry Sanderson is the President of the National Secular Society. The views expressed in this article are those of the speaker and do not necessarily represent those of the NSS.