Apostasy and blasphemy laws: an affront to human rights 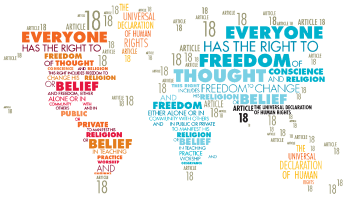 Iran's execution of Mohsen Amir-Aslani on apostasy charges illustrates the injustices caused by such laws in the Middle East and around the world, argues Alastair Lichten.

This week, the Foreign Affairs Committee of the National Council of Resistance of Iran reported the state execution of Mohsen Amir-Aslani. Mr Amir-Aslani was hung on apostasy charges of spreading "corruption on earth" and making "innovations in religion".

Mohsen, a member of the Gonabadi Dervish community, considered himself a Muslim. His remains have reportedly not been released to the family for religious burial. Unfortunately his studies of the Quran led him to an understanding at odds with that of the Islamic Republic's theocratic authorities. He was first arrested 8 years ago when discussion classes he held in his own house came to the attention of local authorities.

Amnesty International are also reporting that nine members of the Gonabadi Dervish community on hunger strike in prison are "critically ill".

Though Mohsen's case is tragic it is also tragically unsurprising. Scroll through the archive of the National Secular Society's media round-up from the last year or even the last month and you will find many other equally tragic stories. Lives cut short by state or vigilante violence after charges related to blasphemy or apostasy.

In 13 countries, all of them majority Muslim, people who openly espouse atheism or reject the official state religion can face the death penalty. Explicit or implicit legal restrictions on atheistic expression are evident in many other counties. In some cases vigilante violence is tacitly endorsed by state authorities, unwilling to offend religious sensibilities by taking action.

This year Saudi Arabia has been cracking down on small Christian gatherings, know as house churches, which they fear may lure Muslims into apostasy. The Government, worried about both liberal and conservative challenges to its preferred form of Islam, has said atheists will receive equivalent legal punishment as terrorists.

In taking over large swathes of Iraq and Syria, Isis has killed untold numbers, from religious minorities and other Muslim groups, whom its members consider to be apostates. Last week Samira Saleh al-Naimi, a human rights activist, was abducted from her home, tortured and executed on charges of apostasy levelled by a sharia court. Ms Al-Nuaimi was accused of abandoning her Muslim faith by criticising the actions of Isis militants.

Pakistan is a hotbed of blasphemy accusations and violence. 17 people are on death row and 18 are serving life sentences following blasphemy convictions. The blasphemy law also legitimises widespread vigilante violence against those accused. For the sake of space I'll restrict my examples to just the last month.

Dr Muhammad Shakeel Auj, an Islamic scholar known for his liberal views, was shot dead while driving in the port city of Karachi. The professor had been accused of apostasy by a predecessor at the University of Karachi.

Mohammad Asghar, a 70 year old Briton, suffers from severe paranoid schizophrenia. While in prison after being convicted of blasphemy Mr Asghar was shot and seriously wounded by a police officer.

31 villagers in Faisalabad were accused of blasphemy in a dispute over the placement of a new Christian cemetery.

The blasphemy law is routinely used to persecute members of the Ahmadiyya Community – a Muslim sect considered to be apostates by many Muslims. Ahmadis who identify as Muslims or call their places of worship "mosques" face charges of blasphemy.

For every case picked up by English language media there are many more that are not. It's impossible to judge the effects of the threat of blasphemy accusations. When someone can remove a local business, personal or sexual rival with a well-timed blasphemy accusation others will be too scared to step out of line. Others will be afraid to express their thoughts for fear that they too may be the next victim.

One opinion poll suggest that 68% of Pakistanis want to see the law repealed. But politicians who support reform are regularly assassinated.

In India, a secular federal democracy, state level laws against apostasy and blasphemy – in the form of anti-conversion laws – are justified on the grounds of protecting religion. An individual's ability to choose their own religion or religious interpretation, or to advocate for a religious position, is regarded as a threat.

Western secularists have a moral duty to show solidarity with the victims of apostasy and blasphemy laws in the Middle East and elsewhere. However we must not be complacent about threats to free speech and freedom of religion closer to home. Most western liberal democracies have rolled back legal restrictions on 'blasphemy'. However these laws have often been replaced by alternatives which restrict expressions deemed 'offensive' to religion.

In their forward to the 2013 Freedom of Thought Report Kacem El Ghazzali and Alber Saber, themselves victims of anti-blasphemy laws in Morocco and Egypt, wrote:

"Laws against "insulting" religion in relatively secure, relatively secular countries, for example, are not only analogues of the most vicious blasphemy laws anywhere in the world, but help to sustain the global norm under which thought is policed and punished."

The same report raised concerns over religious freedom in Austria, Denmark, Germany, Greece, Hungary, Malta and Poland. Countries where blasphemy style laws allow for jail sentences up to three years on charges of offending a religion or its believers.

This week, Ireland's Justice Minister presented a memo to the Cabinet based on the Constitution Convention's recommendation to hold a referendum on scrapping the country's blasphemy law.

Political observers predict that the referendum, likely in spring 2015, will be successful. However some secularists are worried that restrictions on blasphemy or other expressions deemed offensive to religion could be reintroduced through alternative legislative routes.

Atheist Ireland, who are backing the campaign to repeal the blasphemy law, point out that there are already legal restrictions on incitement to hatred against a range of protected characteristics. They worry about the effect that a separate law for religion could have.

The Constitutional Convention heard from Michael Nugent, chairperson of Atheist Ireland, that: "It is also important to remember that blasphemy laws, as well as being discriminatory against atheists, affect religious people too. We in Atheist Ireland campaign for many Christians and Muslims who are victims of blasphemy laws in mostly Islamic states."

Professor David Nash, from Oxford Brookes University, told the Convention: "Although there have been no prosecutions in Ireland, it is clear that this law has victims beyond these shores, as other countries actively cite and view Ireland's law as a precedent to persecute both the religious and non-religious in their own societies."

Self-professed liberals who defend such laws on the grounds of religious freedom or protecting minority groups are dangerously confused. Blasphemy laws disproportionately victimise already marginal groups. Whether they are Gonabadi Dervish Muslims in Iran, Christians in Sudan or atheists in Saudi Arabia. In rural Pakistan allegations of blasphemy can be used to settle family or business feuds – most effective when the victim is illiterate, has no access to lawyers or is accused from the pulpit.

There is not, and never has been, a single denomination of Christianity, branch of Islam or school of philosophy which has not been considered blasphemous or offensive by someone.

The Universal Declaration of Human Rights recognises that human beings, born free and equal in dignity, are endowed with 'reason and conscience'. Every time someone finds, changes, develops or loses their religion they are committing apostasy against the beliefs of their past self. To criminalise this is to criminalise human nature.

Blasphemy and apostasy laws are a gross affront to human rights, a totalitarian denial of religious freedom and a grave threat to human beings of all nationalities and religions.