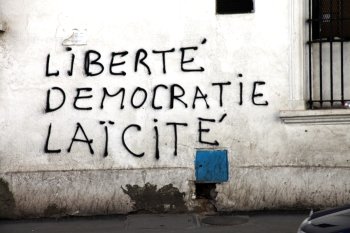 Ahead of an historic conference on the Religious-Right, Secularism and Civil Rights in London this October, Algerian secularist, Marieme Helie Lucas calls on secularists everywhere to mobilise to counter the rise of the Religious-Right – and to urge the elements of the left that support them to reconsider their stance.

Secularism is probably the one big issue for our century.

This century is not, as many still think, marked by a religious or spiritual revival.

What we are actually witnessing is the rise of extreme-Right political movements, working under the cover of religion. Everywhere. No one is spared, neither Buddhism or Hinduism which still enjoy outside their boundaries an undue reputation of being peaceful, nor the notorious Christian-Right, or Muslim, Sikh or Jewish fundamentalisms.

All of them, when given a chance, behave like any extreme-Right movement: they suppress dissent through brute force and they physically eliminate those deemed infra-humans. In the name of their gods.

Secularists are being attacked in many places in the world today: they are jailed, killed, tortured, their very existence is considered an offense to believers in many non-secular states.

The terrible crimes committed right now by ISIS in Iraq, against dissenters, religious minorities and women in general, are far from exceptional: all areas of countries that were momentarily under the boot of armed Muslim fundamentalists experienced similar ferocious repression, be it Algeria in the nineties, Mali, Afghanistan, etc…

Fundamentalist extreme-Right forces manage to get more and more countries to 'accommodate' parallel religiously-inspired legal systems that are a denial of democracy; supposedly divine rules, as interpreted by old reactionary male clerics are given equal status - and sometimes prominence over - hard-won democratically-voted laws.

They are supported at UN and international levels by powerful coalitions (from the Vatican to the Organization of the Islamic Conference and even by the Non-Aligned – alas! - in the name of anti-imperialism) that assert so-called religious rights over and above any other fundamental human rights.

Europe, which has seen parallel legal systems sanctioned by state authorities in the name of multiculturalism, i.e. the promotion of unequal rights for different categories of citizens, has not been spared.

There is a need for secularists around the world to come together and examine their situations, to exchange information, to strategize and to join hands.

This is the purpose of the upcoming International Conference on the Religious Right, Secularism and Civil Rights, which is to take place in London during October 11-12, 2014.

Speakers from countries or the Diaspora as diverse as Algeria, Bangladesh, Canada, Egypt, France, India, Iran, Iraq, Israel, Libya, Morocco, Pakistan, Palestine, Poland, Senegal, Sudan, Switzerland, Syria, Tunisia, UK, USA and Yemen will reflect on the struggle for secularism in both regional and thematic ways and will discuss how to counter the specific forms that attacks on secularism take in various parts of the world, and how to more efficiently mobilize in the defence of threatened secularists.

A number of victims of state repression for having declared their atheism will be present and will testify.

Participants will also discuss how to counter the rise of the religious-Right in countries of emigration such as Europe and North America, and how to help both the Left and human rights organisations, which have been blindly supporting fundamentalist demands – assuming they were the true and legitimate voice of minorities, re-evaluate the politics behind those demands, reconsider their support for extreme-Right political forces and shift their concern to endangered secularists.

To find out more about this historic conference, go to www.secularconference.com

Marieme Helie Lucas is an Algerian sociologist, founder and former International Coordinator of the 'Women Living Under Muslim Laws' international solidarity network and founder of 'Secularism Is A Women's Issue' (siawi.org). She is a member of the Conference Organising Committee.