What chance do Yazidis have against group too brutal for al Qaeda? 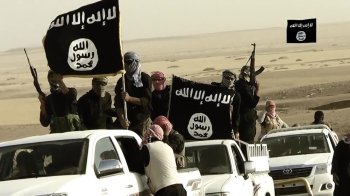 The terror group ISIS (Islamic State in Iraq and Syria) which has shortened its name to "Islamic State" or "IS", led by Abu Bakr al-Baghdadi, its self-proclaimed caliph, has hit a new low. Having spread across huge swathes of Iraq and Syria, leaving absolute devastation in its wake, its latest offensive has brought it to Sinjar, a city in the north western region of Nineveh in Iraq and home to at least 200,000 of the world's 700,000 members of the Yazidi faith.

ISIS has always worn its love for sectarianism on its sleeve, and its vicious hatred for Yazidis has been no mystery. Repeatedly, disturbing videos have been circulated on social media depicting Yazidis held in tiny cells being cruelly taunted by ISIS prison guards. On top of this, "IS" propagandists have continuously warned of their intention to execute or enslave the adherents of this ancient Zoroastrian-linked religion, whom they view as "devil worshippers" on account of their revering a fallen angel.

Therefore, it should come as no surprise that, when it seemed that ISIS were about to sweep into Sinjar last week, thousands upon thousands of Yazidis fled from their homes. Tragically, alongside the local Yazidis that fled were others who had taken refuge in Sinjar the month before, when ISIS captured Tal Afar, a neighboring city.

Everyone's fears proved to be rightly placed, with ISIS fiercely battling and soon routing the Kurdish Peshmerga, leaving them in control of Sinjar and many of its surroundings.

While most fled to refugee camps in semi-autonomous Iraqi Kurdistan, some 30,000 families ended up on Mount Sinjar, where they are now stranded, surrounded by jihadists.

They are forced to sleep in caves, faced with temperatures of over 50 degrees Celsius (122 degrees Fahrenheit) and have no food or water, let alone arms to defend themselves with. Initially, they could contact the outside world using mobile phones. Now, though, most of these have run out of battery and there is no telling how critical the situation has become. What is for certain is that their prospects for escape are minimal.

This is yet another instance of the appalling brutality of "IS", a group that has consistently abused the most basic human rights of the people it has forced itself upon. Over the last two months, it has committed countless mass summary executions of Shiite soldiers and tortured and shot hundreds of Sunni tribespeople who resisted its rule before taking to social media to boast about their actions.

Likewise, it recently gave the entire Christian population of Mosul a choice — either they leave their homes and livelihoods, or they pay a tax to IS on the basis of their religion. Those who refused to do either faced death.

The list of human rights offenses goes on. These jihadists are making a mockery of international law. It is becoming increasingly clear that they will not stop committing these criminal acts unless they are forced to stop. Unfortunately, the prospects for this are becoming more remote by the day, as ISIS fighters continue from strength to strength, capturing most of north-west Syria's largest military facilities and repelling all counter attacks by the Iraqi Armed Forces (IAF).

We, the international community, must not turn a blind eye to what's happening in on Mount Sinjar like we did in the wake of the expulsion of Mosuli Christians or the mass executions of Shiite soldiers. What's transpiring now is a new Kosovo, an ethno-religious cleansing on a huge scale. That it is taking place at the hands of a jihadist group too extreme for al Qaeda, a group that has repeatedly shown that it has internationalist ambitions, is all the more worrying. It is ludicrous that no one has acted against it already when it is clear that neither the IAF nor the Peshmerga is capable of shutting it down alone.

ISIS has acted with impunity in the region for far too long. It has been allowed to take control of an area larger than the United Kingdom, commandeer hundreds of thousands of dollars of U.S.-made weaponry and subjugate nearly 6 million people.

The international community needs to step up to this most troubling challenge. It must provide substantial and coordinated humanitarian assistance to all refugees and internally displaced people — of any faith or ethnicity — in the region. Furthermore, diplomatic pressure must be exerted on Turkey, the only military power in the region that stands a chance of crushing this false caliphate. Ankara must be ready to bury its differences with the Kurds and extend all the assistance it can to them on a human rights basis, even if this means military support.

Lastly, it is imperative that states across the world reaffirm their absolute commitment to article 18 of the Universal Declaration of Human Rights, which establishes the right to free thought, conscience and belief. If we do not stand by our principles, who will?

It is not enough to just condemn something with rhetoric; the world must react robustly and directly to these reprehensible developments.

Maajid Nawaz is co-founder and chairman of Quilliam, a think tank formed to combat extremism in society, and the author of "Radical." The views expressed in our blogs are those of the authors and do not necessarily represent those of the NSS. This article was first published on CNN and is reproduced here with kind permission of the author.