Principles of secularism and equality must be defended 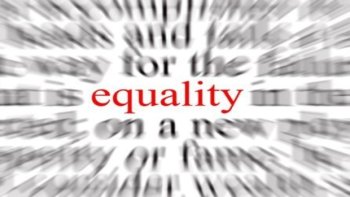 Those seeking to preserve or carve out additional privileges for Christianity in the UK appear buoyed by news that the Equality and Human Rights Commission has launched a call for evidence aimed at strengthening understanding of religion or belief in public life.

Writing in the Guardian this week, Andrew Brown suggested that the EHRC's latest initiative marks "a significant unease with the way in which equality law has dealt with Christians".

The central question, says Brown, is whether there is anything more to Christian discontent than whingeing about the progress of gay rights.

With a certain amount of glee, he heralds "the start of a swing of the pendulum away from 'hard secularism."

But hold on a minute. When did the pendulum really ever swing towards "hard secularism"?

An example of "hard secularism" as cited by Brown is "attempts to ban prayers before the start of council meetings".

But of course there never was an attempt to ban prayers before the start of council meetings.
The High Court ruling obtained by the National Secular Society, to which Brown is referring, simply made clear that prayers shouldn't form part of the official business of local authority meetings. Councillors that wish to do so are perfectly at liberty to meet and pray before the meeting begins; but once it has begun, councillors should concentrate on matters at hand, not carry out religious rituals, particularly as there is no guarantee that all the elected councillors share a particular faith, or indeed, have one at all.

This, the separation of religion from the business of the state, is the very essence of secularism. There nothing particularly 'hard' about it.

"...one group of councillors, however sincere or large in number, should not be permitted to exclude, or even to a modest extent, to impose burdens on or even to mark out those who do not share their views and do not wish to participate in their expression of them. They are all equally elected councillors."

Now, Andrew Brown may consider Justice Ousley to be a purveyor of "hard secularism", but to any objective mind his ruling probably seems eminently reasonable.

Without doubt, the place of Christianity in society is undergoing a certain degree of readjustment. Some Christians understandably feel sensitive about this and have at times mistaken this for being 'marginalised' or even 'persecuted'. For example, in a radio debate with Ann Widdecombe just this week, it was put to me that Travelodge's recent decision to no longer place bibles in their hotel rooms was tantamount to "bullying of Christians". Momentarily, this left me speechless.

Similarly, when Christians, or members of any other religion, are treated just the same as anyone else would be treated in court, it is perceived by some as somehow 'unfair'.

This leads us to another example of 'secularism gone mad'; the idea that gay people shouldn't be discriminated against when receiving goods and services.

Another person encouraged by the EHRC's call for evidence is Don Horrocks of the Evangelical Alliance. Like Brown, he clearly believes Christians are being treated unfairly and warrant some kind of special protection in UK law.

But only by being disingenuous can Horrocks make his case that Christians are on the receiving end of rough justice. "Look at the B&B couple who just wanted the freedom to run their house on Christian principles", bemoans Horrocks.

Of course anyone can run their household on any principles they like. What he's referring to is the case of Peter and Hazelmary Bull, a Christian couple who denied a gay couple a double bed in their hotel, citing on the basis of their belief that any sex outside marriage was a ''sin''.

The courts found that the Christian couple acted unlawfully.

That's because those who campaigned for anti-discrimination laws (including many religious organisations) succeeded in establishing a new balance where individuals were entitled to believe what they wanted but were not allowed to refuse services or employment to people on the basis of discriminatory beliefs.

This came about because many people came to recognise that acts of discrimination, such as refusing to employ women or making black people sit at the back of the bus, violated the right of individuals to access goods, services and jobs as well as undermining their dignity.

The only difference is that now, sexual orientation has been included as a protected category and is regarded as no different than discrimination on the grounds of race or gender, or any other protected characteristic.

So, now equality legislation no longer suits them, some religious groups are trying to establish a hierarchy of rights, with religion at the top. To that end, it has been argued that what's needed is a specific 'conscience exemption' from equality law for 'religious businesses'.

This notion should be rejected out of hand, but worryingly, the idea appears to be gaining some traction.

In the US, the Supreme Court recently extended religious freedom rights to corporations (or at least those with a limited number of shareholders). Moreover, by granting exemptions to a federal law that requires them to offer health insurance plans to their employees that include no-cost birth control, it decided the religious rights of corporations are more important than women's health.

Even in the UK, Britain's most senior female judge Lady Hale recently suggested that our law may not yet have found a "reasonable accommodation" for the manifestation of religious and other beliefs, and pondered whether we would be better off with a "more nuanced approach".

But the kind of exemptions that are being sought cannot be granted without fundamentally undermining anti-discrimination laws and human rights more generally.

Essentially, secularism is a balancing act. It's about ensuring that everybody's rights and freedoms are given equal consideration.

This important principle is enshrined in Article 9 of the Human Rights Act, which ensures all individuals have the right to freedom of thought, conscience and religion; but freedom to manifest one's beliefs can be subject to limitations where necessary to protect of the rights and freedoms of others.

The law has until now been very clear in this area and the courts have for the most part been successful in striking a fair balance. Attempts to tip the balance in favour of Christians, or any other religious group, must be resisted.

The Evangelical Alliance claim to represent 2 million people and they're encouraging all of them to summit evidence of their 'unfair treatment' to the Commission.

They may have strength in numbers, but they certainly don't have it in their arguments.

The right to manifest your belief is not absolute. Other people's rights and dignity matter too. Religious or otherwise, there is simply no reasonable defence for the kind of discrimination that undermines human dignity, particularly when providing goods and services.

I for one would to like to think that the days of signs proclaiming "no blacks, no Irish" are long behind us - but perhaps our detractors would be happy to see them return for gays? This is after all a logical consequence of their position.

I suspect that the vast majority of fair-minded British people, including sincere religious believers, will take a lot of convincing that this is the kind of society we want to return to.