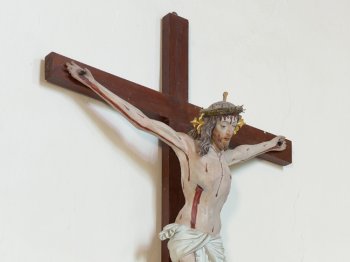 Following the erection of a crucifix in the newly renovated Kerry County Council chambers, Dr Ronan McCrea argues that the values of a particular faith should not be given predominance in State institutions.

The decision to erect a crucifix in Kerry County Council's chamber recently should worry all concerned about the future of Irish public life.

Supporters of councillor John-Joe Culloty's move argued that they were "tired of apologising" for their religion and passed a motion that called for the erection of the crucifix "in light of our Christian faith and the strong Christian values contained within our Constitution".

Has serious harm has been done? After all, no objections have yet been received from council employees and some suggest local Muslims are actually in favour.

No one has the right to go about their business shielded from any symbol with which they may disagree, and the European Court of Human Rights ruled in Lautsi v Italy in 2011 that the presence of a crucifix in a state school does not violate the European Convention, provided its overall effect is not oppressive.

However, this decision raises broader issues about the relationship between religion and public life. The problem of enabling diverse religious believers to share a single political system is centuries old. In Europe, the destruction caused by the wars of religion following the reformation brought about what American historian Mark Lilla called "the great separation" involving recognition of political matters as distinct from religious questions, which allowed states to avoid highly-destructive religious contests for political power.

That requires a degree of self-discipline – individuals must differentiate between what their faith and the law may require. In western liberal democracies we are well accustomed to this habit and can treat it as inevitable and universal. It is anything but.

In large parts of the world, notably but not exclusively in many Muslim-majority societies, religion exercises a dominant influence and obedience to religious commands in matters such as sex, free speech or apostasy is enforced by law.

For decades following independence the Irish State had an unhealthily subservient relationship to the predominant religion. A high degree of religious homogeneity meant the arrangement did not produce political instability though it had large costs in terms of individual rights.

Immigration and the rapid rise in the number of those of no religion has meant that in the future our institutions will have to obtain the allegiance of a religiously diverse population. They cannot be seen, symbolically or substantively, to be the preserve of one faith.

The republican tradition of Wolfe Tone means that when we enter the political arena we are not Catholic, Protestant or dissenter (or Jew, Muslim or Hindu) but citizens exercising collective democratic self-government for a population that will always be divided on religious matters.

Recognising that life in such a society means we must all refrain from seeking to use politics and law to promote our particular faith will be difficult for some – and particularly for those with origins in parts of the world where religion dominates political life.

It would be entirely unreasonable to ask Muslim citizens to place religious teachings advocating criminalisation of alcohol, apostasy or homosexuality to one side when they participate in public life when Christian fellow citizens refuse to separate their religious claims from their political activities.

This does not mean losing contact with our culture or history. Christianity's long influence means that, inevitably, some communal arrangements will bear its marks.

The status of Christmas and Saint Patrick's Day as national holidays is a case in point, an inevitable consequence of the need to have holidays and festivals that have historical resonance.

Indeed, in the Lautsi case the ECHR upheld the display of the cross in Italian schools because the decision was merely perpetuating a pre-existing cultural tradition. Kerry County Council's decision is different. It decided to erect for the first time in its history a religious symbol in its chamber to ensure that the values of a particular faith would have predominance in an institution meant to make rules for all the people of Kerry.

This has nothing to do with tradition or identity, but with the promotion of a particular faith by a State institution.

State bodies should not promote Catholicism, Islam or atheism, but be committed to co-existence and equal respect for those of all faiths and none.

Culloty's move undermines this. It is utterly inconsistent with the republican ethos his party claims to espouse and a threat to the development of a stable political order that can command the loyalty of all in diversifying Ireland.

Dr Ronan McCrea is an an Irish barrister and lectures in constitutional and European law at University College London. This article was originally published in the Irish Times and is reproduced here with kind permission of the author.