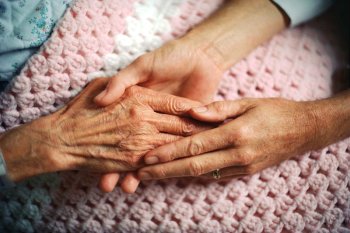 Speaking from personal experience, Terry Sanderson argues that religious opposition to a new law on assisted dying causes needless suffering for the terminally ill and their families.

The campaigning group Dignity in Dying has launched a campaign aimed at the three main party leaders asking them to support a change in the law on assisted dying. (You can sign a petition here)

Surveys repeatedly show that 80% or more of the population would support such a change and yet, whenever the matter comes to parliament it is stymied by religious interests. There is now even an instruction booklet telling Christians how to campaign against any reforms.

The bishops and their friends in the churches, mosques and temples rise up as one and tell us that what they believe is more important than what the rest of us believe and that their opinion will prevail.

Up until now, it has. But that must change.

Politicians must listen to what their constituents are saying. Many have stories of horrendous suffering endured by loved ones at the end of their lives, suffering that cannot always be alleviated by palliative care.

My own experience is still raw. Last week my mother died – she was 98 so it was not a tragedy in the sense that she had been robbed of life too soon. But when she developed pneumonia and it was clear that there was no prospect of recovery, her final days could have been foreshortened and it would have relieved her and us – her family – of much distress.

Instead, she endured three days of gasping and thrashing about as treatment was withdrawn and food and drink denied. We had agreed to this course of action, hoping it would end things quickly. But it could have been finished days earlier had the law permitted it.

Almost everyone I've spoken to about this has a similar story of terminally ill people suffering to the very end. Palliative treatment is wonderful, but it can still leave relatives keeping bedside vigils that exhaust and traumatise them.

The BBC's religion and ethics department has just posted an article about religious attitudes to end-of-life care and for the most part it seems sensible. But in some cases, as with Rabbi Yehuda Pink, who is quoted in it, there is a dilemma. "If the administration of the pain relief would have such severe effect, like to almost certainly kill the person, that would clearly be forbidden. For example, euthanasia is certainly not allowed in Jewish terms."

Rabbi Pink, like so many other religious leaders, claims to be a man of compassion. But to deny pain relief to the dying on the basis that it might shorten their life is little short of monstrous.

To deny people who are terminally ill and do not share your beliefs the right to choose when they die is simply unjust.

Many laws that were dictated by religious dogmas have been dispensed with over the last century. The laws forbidding abortion, divorce, contraception, suicide, homosexuality, cremation, Sunday shopping and so on have all been done away with because society wanted it.

Well, society wants well-regulated laws on assisted dying for the terminally ill, too.

And it is time parliamentarians told the religious objectors: you are not obliged to take advantage of any new law permitting a dignified death, you can permit your loved ones to suffer if you want to.

But you must no longer have the right to deny this choice to others.

This should be in every political party's manifesto, but none seem to have the courage to confront the issue.

In the meantime, every day of the week, the experience I had with my mother is being repeated up and down the country. It cannot go on.

Terry Sanderson is president of the National Secular Society. The views expressed in our blogs are those of the author and do not necessarily represent the views of the NSS.