Schools and the failure of multiculturalism and multifaithism 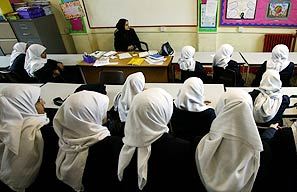 The spat between Michael Gove and Theresa May focuses on the failure to tackle Islamic extremism in Birmingham's schools. Whether such failure can be attributed to one party or the other is, in fact, a moot point. The real problem has deeper roots: it resides in the failure of multiculturalism and multifaithism. Given that both the previous and present governments describe Britain as being a multi-faith society, it is entirely to be expected that leaders of those groups for whom their faith trumps all other indicators of identity, will seek robustly to instil the imprimatur of the values and practices of their religion. In this context, recent statements made by Prime Minister David Cameron and Communities Secretary Eric Pickles that Britain is essentially a Christian country, are most unhelpful in that they provoke many within the faith minorities to emphatically say "no we are not", and to assert their own non-Christian faith identity with even greater vigour.

This fundamental truth has not well been understood by the political establishment. Rather, like the previous government, the present coalition government's concern has been on tackling Islamist terrorism following 9/11 and especially since the 7th July 2005 bombings. It is precisely this thinking that led Michael Gove to appoint Peter Clark, former National Co-ordinator for Counter Terrorism, to review the evidence of the Trojan Horse plot. This detracts from core of the problem of heightened faith identities that are facilitated by high levels of segregation in communities and in schools.

Indeed, concerns about segregated schooling go back decades. As far back as 1985, the Swann Report on education highlighted the dangers of "separate schools" for ethnic minorities. Two decades later, Barry Sheerman, chairman of the Commons Education Select Committee, warned in 2005: "Do we want a ghettoised education system? ... Schools play a crucial role in integrating different communities and the growth of faith schools poses a real threat to this. These things need to be thought through very carefully before they are implemented". In a similar vein, in 2007, Commission for Racial Equality Policy Director Nick Johnson cautioned that Britain risks becoming a "mini America" dominated by racially and religiously determined schools, and warned: "If a Muslim child is educated in a school where the vast majority of other children are also Muslim, how can we expect him to work, live and interact with people from other cultures when he leaves school? This is a ticking time-bomb waiting to explode". Given that practically nothing has been done to tackle the roots of the problems, that is, to tackle the very high levels of segregation and promote genuine integration, such a proverbial "time bomb" has indeed exploded in Birmingham, and will doubtless do so in many other towns and cities.

This reasoning and warning is absolutely correct. A natural consequence of residential segregation is that schools in inner cities have also become segregated: in the 21 Birmingham schools that were inspected by Ofsted, children of Muslim parents comprise over 90 per cent. Channel 4 News reported that in one school, only one child was non-Muslim; the white mother of the child thought that though a secular, state, school, it felt like a Muslim faith school. Indeed, this is precisely what has been happening: parents and governors of these schools are attempting to convert them into de facto Muslim faith schools. And here is something that has not been remarked upon: what is giving cause for concern re attempts by Islamists to take over state schools in Birmingham is precisely what has been made lawful in free schools and faith schools. Abandoning children to such schools, which are plainly not fit for purpose for modern Europe, is nothing short of a dereliction of duty.

The rising level of segregation is not only a phenomenon of "white flight" but also the flight of those from other religious-ethnic minorities. Polite society may not notice, but the stark reality is that Hindu and Sikh parents do not wish to send their schools where there is preponderance of Muslim children and vice versa. So what have arisen are "mono-faith" neighbourhoods and schools. Given the enormous importance of the formative years in life, this phenomenon can have a highly significant and lasting effect on how children from different backgrounds relate to each other. Put bluntly, there is likely to be a deleterious impact on integration and cohesion from heightened levels of segregation of children and this surely does not at all augur well for the goal of a socially cohesive society. If segregation of communities is not a desirable outcome and is an obstacle to improving social cohesion, then it is certainly also true for children in schools.

Michael Gove's call that school children must be taught "British values" is inadequate given that there is simply no agreed definition of what these values are. Rather, it is imperative that a child's accident of birth should not preclude a broad, critical, tolerant education; this must necessarily be secular. Moreover, this needs to be combined with children from minority communities mixing with others, especially with those from the majority white society. These enormously important lessons need to be learned and acted upon by both the government and the opposition.