School chaplains: the Church of England's latest plan to evangelise in schools 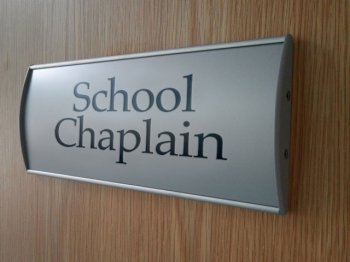 With the majority church schools now employing Christian chaplains, Stephen Evans questions whether public money intended for education should be used to fund the Church of England's missionary work.

A new study on school chaplaincy, published last week by the Church of England, has revealed that the majority of Church controlled secondary state schools and academies now employ a Christian chaplain, or team of chaplains, as a permanent presence on site. The majority are ordained ministers. Almost all are directly funded by public money through the school's own budget.

Given the absence of young people from the pews (church attendance in Britain by the under-19 year-olds has dropped by two thirds in the last twenty years and is predicted to fall by a further two thirds in the next fifteen years), the Church of England has targeted school chaplaincy as a vital part of ministering the Gospel to young people - with the taxpayer picking up the bill.

We're told the primary role of a chaplain is to provide pastoral support to pupils. But the striking thing about the Church's report, The Public Face of God, is that young people hardly get a look in. The emphasis is almost entirely on how chaplains serve the mission of the Church.

Surely pastoral support should exist to create a nurturing and supportive setting for students during their time at school. The focus should be care and concern for young people and their needs; not the needs of the Church.

Those providing pastoral work in schools need the necessary knowledge and skills to offer effective learning-support and the knowhow to develop pupils' ability to become good citizens. It goes without saying that those carrying out pastoral roles can be motivated by their religious faith, but it shouldn't be a requirement of the job.

But according to the Church, the Christian ethos of a school means placing all its activity into a spiritual context - including pastoral care, counselling and mentoring.

Of course, the reason is because it's not really about meeting their needs. It's all about the Church, and how it can increase its influence on schools - and the young people that attend them.

I don't doubt for one second that many within the Church, including chaplains, care passionately about the welfare of young people and their educational outcomes. They may well be able to provide excellent pastoral care, but should do so in a secular context, and not use the position to carry out their Church's missionary work.

In the report, chaplains describe their role as "holy loitering" and say 'hanging around' is an important feature of the chaplain's role.

When they're not "holy loitering", chaplains say they spend their time "commending the Christian faith", "maintaining relationships with the local Church", organising and leading school worship and teaching religious education (if you thought RE was objective and balanced these days, think again).

Chaplains are also there to police the school's "religious ethos". As the report states:

"The chaplain represents the Church and reminds the school that it is part of the ministry of the Church. This function brings the authority of the Bishop and also a commitment to the distinctive Anglican identity, in all its rich variety, of the worship and life of the school."

The Church of England is no doubt encouraged by developments in Australia, where the Federal Government's Christian chaplaincy drive, known as the National School Chaplaincy Program, has removed the option for schools to employ secular welfare workers, and will now only provide funding for chaplains - most of which represent a Christian faith.

In 2012, Revd. Janina Ainsworth, the General Secretary of the National Society (the educational wing of the CofE) let it be known it was interested in the Australian model - particularly where the funding came from the state.

Just last year, John Pritchard, Bishop of Oxford and Chair of the Church of England's Board of Education, made it clear that schools were regarded by the Church as the primary method of recruiting the next generation of Anglicans. "We don't need to attract [young people] to church" he declared, "they're already there, if we embrace our church schools fully."

And that's what the Church of England's new national initiative to increase the number of chaplains in schools and academies is all about.

The state currently provides full funding for 220 Church of England secondary schools and 80 sponsored academies. As the Church's chaplaincy report points out, school chaplains are ministering to considerable numbers of young people. "Tens of thousands of young people are hearing the Gospel; being led in worship and reflection", it rejoices.

For too long the Church of England's assumption that publicly funded schools are appropriate places to minister the Gospel has gone unchallenged.

Because they can't reach young people in church, many within the Church like to consider church schools as churches. But a distinction needs to be drawn. Faith schools are state-funded educational establishments, and the public money religious organisations receive to run them is intended for education, not proselytization.

Pastoral support is an important part of school life. Those providing it shouldn't have an agenda to evangelise. "Holy loitering" shouldn't be acceptable behaviour in schools, and the Church of England's missionary work certainly shouldn't be coming out of school budgets.