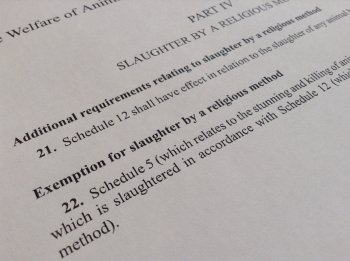 Food retailers should be upfront about what they're serving up, but the main issue is one of animal welfare, and the religious exemption that allows animals to be slaughtered without being stunned, argues Stephen Evans.

Halal again hit the headlines this week, after the latest "revelations" that Pizza Express was serving up halal chicken to all its customers without their knowledge.

Following the media storm Pizza Express said it would "review its policy". As all Pizza Express chicken had been pre-stunned in accordance with UK law, one wonders what all the fuss was about. Some Sikhs and Christians, whose beliefs prevent them from eating meat dedicated to another god, may have their objections, but it's hard to see why most people find the idea of their meat being prayed over quite so objectionable.

One concern however is that with so much halal meat being produced (as it becomes the default position for national food outlets), we're entrenching employment discrimination in the meat industry and disadvantaging non-Muslims. According to the Halal Food Authority, some jobs at halal approved abattoirs are open only to "performing Muslims", and non-Muslims need not apply. Chains such as Pizza Express should be mindful of this.

But perhaps the public outcry over halal, now dubbed 'halal hysteria', is really a proxy for wider concerns many have about 'sharia creep' – the accommodation of Islamic practises in the UK, which they feel are starting to encroach upon what were previously secular spaces – food production, finance, law and state education.

Food retailers should be upfront about what they're serving, but surely the main issue surrounding halal and kosher meat is one of animal welfare, and the religious exemption from UK law that allows animals to be slaughtered without first being stunned.

The National Secular Society has long argued for an end to this exemption. But as long as exemptions are granted, it's necessary for meat from non-stun slaughter to be appropriately labelled, enabling consumers to avoid meat from animals not slaughtered humanely, if that's their choice.

The main source of opposition to method of slaughter labelling has been the religious slaughter industry.

When proposals to introduce mandatory labelling of meat from slaughter without stunning were brought forward by MEPs in 2010, the Jewish food lobby group Shechita UK unleashed a "professionally managed Europe-wide lobbying campaign" to block the proposals.

The proposal (known as Amendment 205) to label meat from slaughter without stunning was supported by MEPs, but later dropped by the European Council of Ministers following Shechita UK's campaign.

This is why I greeted a letter in the Telegraph this week, calling for all meat to be labelled with details of its slaughter, signed by Henry Grunwald, Chair of Shechita UK, with some scepticism.

There may be some merit in the argument to include all methods of killing on food labels, but the chance of this being supported by the meat industry is remote at best. Shechita UK and the Muslim Council of Britain know this, and their support for clearer labelling of meat on these terms is simply an attempt to get some good PR whilst making sure the labelling issue is kicked into the long grass.

It's important to remember that the only reason non-stun slaughter is permitted at all is because of a religious exemption from EU and UK law that requires all animals to be stunned before slaughter in order to minimise suffering. And this is the point that Shechita UK and the Muslim Council of Britain intentionally miss. That's what makes non-stun slaughter a specific issue of concern from a consumer rights perspective.

The Government has been clear that it would "would prefer that all animals were stunned before slaughter", but that it "accepts the importance which [Jews and Muslims] attach to the right to slaughter animals for food in accordance with their beliefs."

If religious groups are to be given privileged exemption from UK law, it seems reasonable to expect consumers to have the right to avoid meat from animals killed under that exemption.

In fact, meat from animals killed under the exemption is only supposed to be for the consumption of Muslims and Jews, but for economic reasons this targeting of supply is not enforced, and non-stun slaughter meat routinely sold on to the general market – which leads to unsuspecting members of the public being duped into buying meat from religious slaughter methods and at the same time artificially subsidising the religious slaughter industry.

This deceit needs to end.

A study is currently being undertaken by the European Commission on the viability of meat labelling with reference to stunning/non-stunning. The results of the study, initially foreseen for this month, will now not be available before December.

In the meantime, we can all put pressure of the Government to put an end to non-stun slaughter, or least ensure meat from such methods are properly labelled by signing the British Veterinary Association's e-petition.