A woman is stoned. We politely look away 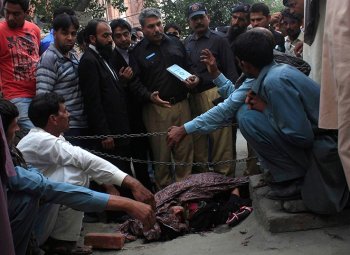 Our reluctance to fight 'small' battles – over forced marriage and the burka – merely emboldens the fundamentalists, argues Matthew Syed

I guess I should start by saying that I am half Pakistani. My dad grew up there, has dual citizenship (British and Pakistan) and many of my cousins still live there, including the lovely Zafar, who is based in Lahore.

I also have a couple of relatives who, while no longer living in Pakistan, are Islamic fundamentalists, the kind of people who will have read about the stoning to death of a pregnant woman outside a courtroom in Lahore on Monday and nodded approvingly. They will have done so not because they are lunatics — you would be surprised how rational and charming they appear in conversation — but because of their warped version of religion.

How do they get to such a curious and hateful place? The real problem, I think, is the way moderates both here and in Pakistan tolerate the "smaller" stuff. You know, the way that we turn a blind eye to young girls being "pushed" into marriages they don't really want; the way that "cultural differences" are invoked to legitimise the burka.

These little retreats may seem tolerant and enlightened, a way of embracing people who hold different views; a classic liberal fudge. But they are nothing of the sort. They embolden and shore up fundamentalism. They offer encouragement. And they culminate in the grotesque travesty of a silent minority in Pakistan looking the other way as women are buried up to their waists while members of their own family throw bricks at their heads.

My family has been guilty of it, too. We had one of our fundamentalist cousins to stay when I was in my late teens. My dad — who converted to Christianity as a student in London — took down signs of the cross and a cream-coloured plaque that read: "Christ is the Head of this House". He did so not because his Christianity is lukewarm (it really isn't), but because he did not want to offend Shabba.

To dad, it was the humane thing to do. Shabba would have been deeply affronted if he had learnt about my father's apostasy and would have been honour-bound to leave the house. Dad felt that it was magnanimous to pretend that he was still a Muslim for a couple of days. He felt that, in his compassion for our cousin's feelings, he was acting in a Christ-like way. But looking back, I can see that he wasn't. He — we — should have confronted it head-on. The small battles matter.

You want to know the true meaning of fundamentalism? The 2008 Iranian Penal Code mandated that the stones used to kill adulterers should "not be large enough to kill the person by one or two strikes — nor should they be so small that they could not be defined as stones". You see the point, here? Too big and the victim might die too quickly. Too small, and you might waste an entire day completing a capital punishment. Iran has recently claimed to have dropped its fetish for stoning, but it still goes on in enclaves around the world committed to Sharia.

Turn your mind away from the brutality of honour killings and focus, for a moment, on the psychology. Consider the corrupting power of a religious ideology that can animate a father to perpetrate the most intimate and barbaric of assaults on his own daughter, a brother on his own sister, an uncle on his own niece.

"I killed my daughter as she had insulted all of our family by marrying a man without our consent, and I have no regret over it," the police investigator quoted the father of the murdered woman in Lahore as saying. Her crime, in case you were wondering, was to fall in love with the wrong man.

You cannot win against this kind of barbarism by being nice. You can't win by beating a strategic retreat, as Sotheby's plans to do by withdrawing nudes from arts sales because they are terrified of offending Middle Eastern clients. Fundamentalism is too fierce, too implacable, it takes too deep a hold on those who are infected by it, to reach any kind of compromise. Trying to find an accommodation with fanaticism is like trying to cuddle a virus.

A decade ago, the Metropolitan Police set up a task force to investigate "honour" killings after a series of incidents, including the murder of Rukhsana Naz, a 19-year-old who wanted to divorce her husband and marry her boyfriend. She was strangled by her brother with a piece of plastic flex while Shakeela, her mother, restrained her. Her body was then driven more than 100 miles to be dumped. Heshu Yones, a 16-year-old, was stabbed to death by her father because he disapproved of the way she dressed and of her Christian boyfriend.

Some estimates put the number of honour killings in the UK at 12 per year, but this does not reflect the true scale of honour-related crime. Nor does it encompass the countless women who dare not breach the restrictive codes laid down by their families out of sheer dread. This is the deeper story of repression that afflicts women around the world and which is too often hidden from view.

We have to recognise that we cannot compromise with fundamentalism. The middle road, with its dangerous euphemisms of tolerance and cultural respect, was only ever a dead-end. If we want to win the big battle, we have to win the small ones, too. That is the most valuable lesson to take from the tragedy of a 25-year-old, stoned to death in broad daylight for loving the wrong man.

Matthew Syed is a columnist and feature writer for the Times. This article was originally published by the Times and is reproduced here with the kind permission of the author. The views expressed in this article are those of the author and do not necessarily represent the views of the NSS.