Religious schools are the problem, not the answer 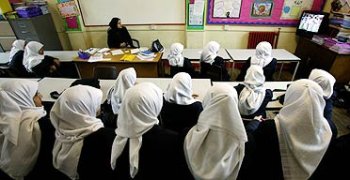 One could almost be tempted to say "Hallelujah" to the news that Michael Gove, the Education Secretary, has at last recognised that there is a problem with dangerous religious proselytising in schools – particularly, but certainly not only, in Muslim-dominated schools.

The latest news is that he has sent "teams of inspectors" into various community schools in Birmingham and Manchester to find out the extent to which they have been hijacked by Islamist extremists who are intent on using the schools as religious recruiting grounds rather than places of general education.

Meanwhile, reports suggest that some schools with a Muslim ethos have become little more than madrassas paid for by the taxpayer, with the emphasis on religion so extreme that there is little time for anything else.

In February the NSS found that one Muslim school, the Madani High School in Leicester, was advertising for a specifically male science teacher which we argued is against the equality laws. The Department for Education agreed and the school was told to change the way it advertised for staff.

However, the head of governors decided that it was not against the law and said that he would continue to recruit teachers on the basis of their gender. A report into the school by Channel 4 News has the chair of governors saying that "faith schools" have an exemption from the Equality Act that permits them to recruit on Islamic lines. However, this exemption is very narrowly drawn and quite clearly does not apply to science teachers.

The NSS has been arguing for decades that these schools are divisive. How can they be anything else when they separate children on religious grounds? And yet still our political classes persistent in praising them to the rooftops.

The latest was Ed Miliband who, in a confused statement about his personal beliefs ("I am an atheist who has faith") lauded the "incredible job" done by "faith schools".

We all know that politicians feel they have to walk on eggshells so as not to upset "faith leaders" but taken together with Cameron's own sudden public embrace of evangelical Christianity, and Nick Clegg's decision to send his children to a strict Catholic school, it is clear that the prospect of any serious political challenge to religion-based education is nowhere in sight.

When the NSS exposed an Orthodox Jewish school for crossing out questions on exam papers that didn't fit with the school's "religious ethos" it became clear that more and more schools are being governed by extremists. And the Government is funding them with public money.

The Church of England and the Catholic Church on the other hand, insist that we mustn't lump all "faith schools" together. Maybe some minority religious schools are abusing the system, they will say, but the good old, moderate Church of England (which has around a quarter of our school system under its control) and the traditional Catholics aren't like that.

Taking advantage of the Government's open cheque book, the CofE has set about establishing hundreds of new schools. They may provide a good education (not all of them do) but they are now seen by the Church primarily as recruiting grounds. Not only do they allow the Church to corner the generation of children who have little interest in religion, but some also force their parents into the pews in order to get the all-important vicar's letter that provides entrance to the state school.

We need to ask: How have we reached the point where the local vicar decides who gets a place at a state-funded school?

The Church of England's education supremo, the Bishop of Oxford, has said: "The clergy ought to have a camp bed in [schools] for heaven's sake! We don't have to bemoan the fact that our Sunday school has collapsed if there are 200 children at the local church school. The first big challenge is truly owning the centrality of our church schools in our mission..."

The Chair of the Catholic Education Service similarly says: "The Catholic ethos...should be incarnate in all aspects of school life, so that they may be effective instruments of the New Evangelisation."

And even in community schools there is a danger from determined evangelists who seem to be welcomed with open arms by headteachers in so many schools.

There are almost daily complaints arriving in the NSS's email box from parents angered by some of the extremist Christian groups that are invited – without their knowledge – into their children's schools. The Department for Education's response to the NSS's report into religious visitors in schools was simply to absolve itself of any responsibility for what evangelism is occurring.

Surely the time has come for a much more rigorous and fundamental consideration of the whole concept of "faith schools".

They are rapidly becoming a danger to the country and present a completely unjustifiable imposition on our children and their education.

The argument that they provide a "superior education" which excuses everything does not stand up. Would the excellent teachers that they employ suddenly disappear if the "faith" element was removed? Would the community be better served if these schools were truly community schools, open to all, and not just gathering places for the sharp-elbowed middle classes?

The arguments about "faith schools" have been rehearsed over and over. A solution to the problems and dangers they pose is no nearer. A few Islamic schools may be closed or re-staffed, but after that it will be business as usual.

I don't think Mr Gove has yet grasped just how determined and persistent these religious proselytisers are. Once he has patted himself on the back for kicking out a few extremists and he looks away for a moment, it will all start again.

And the system of academies and free schools that he has implemented is surely making the problem worse. It is presenting more opportunities for extremists to move in once the school is established, free from the scrutiny of local authorities.

While "faith schools" remain, the fanatics will always find a way to take advantage. After all, gaining access to the malleable minds of children is a primary motivation and even the CofE admits that.