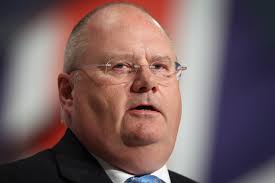 Rather than being a voice for "moderation and reasonableness" over prayers at council meetings, the partisan and dictatorial Mr Pickles is pursuing an agenda to impose his religion on public life, argues Terry Sanderson.

You will remember that the Communities Secretary, Eric Pickles, was a very strong opponent of the decision by the High Court in 2012 to ban prayers on the agendas of council meetings. In fact, he was almost apoplectic about it.

He announced that he had rushed through the Localism Act which, he claimed, permitted the councils to disregard the court's decision and continue including prayers on the agenda if they wanted to.

At the time of these events we said that only dictators unilaterally over-ruled laws that didn't suit them. We said that the Localism Act didn't mention prayers, that prayers had never been mentioned in any of the debates leading up to it and that Mr Pickles had not tested his contention in court. Our own legal advice was that Mr Pickles was entirely wrong.

In the Daily Mail today he is quoted as saying:

"I am a Christian, but my little intervention was basically just to say "let's allow people to have a prayer before a council meeting". I would have been equally angry if people were forced to go to the prayer.

"All I wanted to do was allow people, but on that basis the entire heavens have opened up - you would have thought I was some kind of ayatollah demanding people go to church when I was just trying to be a voice for moderation and reasonableness."

Let's get this straight. The National Secular Society has said from the beginning that it does not want to stop anyone praying or expressing their religion. All we wanted was for it to be separate from the official business so that no elected councillors are excluded from any part of the meeting, or compelled to participate in prayers. A local authority is for the whole community and participation in it should not be restricted – even nominally - to religious people alone.

We said at the time that we were happy with councils having prayers before their meetings, so long as they were separate from official business. Councillors are obliged to attend for the duration of the formal agenda, so there is no escape if you don't want to participate in prayers for any reason.

"The saying of prayers as part of the formal meeting of a Council is not lawful under S111 of the Local Government Act 1972, and there is no statutory power permitting the practice to continue. I do not think the 1972 Act should be interpreted as permitting the religious views of one group of councillors, however sincere or large in number, to exclude, or even to a modest extent, to impose burdens on or even to mark out those who do not share their views and do not wish to participate in their expression of them. They are all equally elected councillors".

Mr Pickles new version of events now presents him as a victim of pushy secularists who want to banish religion from all aspects of public life. He is suddenly the voice of "moderation and resonableness".

But let's go back to the letter he sent to local authorities after the High Court decision. A letter which made quite clear that there was a theological basis for his actions. He said in the letter:

"...the decision on whether to hold prayers is now a local one again. Our multi-faith nation, which has brought many benefits, is not strengthened by the secularisation of civil life. I hope this action sends an important signal about how this Government values and will champion the continuing role of religion in public life."

Once again Mr Pickles is behaving like some kind of theocrat, unilaterally declaring that religion is the basis of our democracy.

It is not for him to simply impose religion on public life in this way or to say that anyone who is not religious can lump it.

Mr Pickles is not a voice of moderation when it comes to religion, he is partisan and dictatorial. And we should not allow Mr Pickles' controversial religious history to be forgotten, either.