We must give up our faith in religious schools 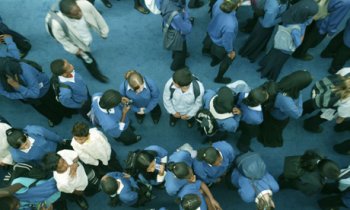 If social integration is the aspiration, we should start in schools and remove faith schools' right to religious selection, argues Philip Collins.

The task of living together well is the dilemma of the diverse modern city. I saw this at its most acute in the years I lived near the West Bank. Not the landlocked area that forms the bulk of the Palestinian territories, which David Cameron visited yesterday, but the street of that name in Stamford Hill, London N16.

On my side of the bank, people mostly like me lived out their lives of cosmopolitan prosperity, spending their days in town and their nights in the restaurants of Church Street. On the other side, 100 yards away, the largest community of Hasidic Jews in Europe lived, worked and went to school in what they called their "square mile of piety". The men of the area walked the streets in the clothes their predecessors would have worn in the shtetl back in the Congress Kingdom of Poland.

No conversation passed between the two communities, no pleasant greetings were exchanged on the rare occasions somebody crossed to the wrong side of the bank. We lived our separate and incommensurate lives in our cultural redoubts, happily and peacefully ignoring each other. I wondered at the time, and I wonder now, whether we were the very model of multiculturalism or whether, in our ignorant tolerance of each other, we were the problem that multiculturalism creates.

The way this dilemma turns up in public policy is through schools. It is only in school that we all establish a daily relationship with others who are both providing and receiving a public service. Health and welfare are episodic experiences that we draw upon when need arises. It is only in schools that we are locked into a space with the same others day after day. The Prime Minister has spoken frequently of the importance of integration. Two days ago, he defended the religious practice of shechita on the grounds that Jewish people in Britain had taken great pains to integrate.

So, if integration is an important principle in the public realm and schools are the place where we most frequently come together, then the writ of integration must surely run in schools. Except that it doesn't, as we discovered when Michael Gove, the Education Secretary, chose a faith school for his daughter's education last week. Faith schools are the only state-funded institutions with a specific exemption from the Equality Act that permits them to distinguish between people on the grounds of belief. Fifteen per cent of children attend schools that select according to religious identity. Faith schools have 90 per cent of their capital costs and all of their running costs paid by public grant, and yet are still permitted to place restrictions on admissions, the content of the curriculum and school worship.

This was once justified as alms to the poor. The 19th-century Church provided elementary education in areas of great destitution where no other option was available. This was missionary work in poor places and one would have to be excessively secular at heart to say that no good was done thereby.

This defence, however, is no longer available. It is enough to restore your faith in miracles to see the pews of the churches fill with parents who find their lost faith, albeit briefly, in perfect alignment with the passage of Junior from primary to secondary. This is just selection on its knees in prayer. Church of England secondary schools admit 10 per cent fewer pupils eligible for free school meals than live in the catchment area. The other faiths are worse. The Roman Catholic schools have a deficit, on the same measure, of 24 per cent, Muslim schools of 25 per cent and Jewish schools of 61 per cent.

It is the selective intake, in which social class wears the disguise of a religious affiliation, that is the clue to the fact that faith schools are good academically. When the advocates of integration feel uncomfortable in their contradictory defence of schools that separate pupils by religion, they switch their defence to the success of the school. Does it really make sense, they ask, when the urgent task is to create more good schools, to close down some of the best ones in the land?

Well, no, put like that it makes no sense at all, but it is important to clarify what makes for a good school. After decades of experiments in schooling, after many ventures in reform, we know a great deal about the constituent parts of a first-rate school. In a fine book calledLessons Learned, Fenton Whelan has done the considerable service of distilling them. The most important factor of all is the quality of teaching. Recruiting the best possible people into teaching matters massively more than anything else. Schools need tough leadership and accountability to the discipline of inspection.

In exhaustive detail drawn from the Middle East, Singapore, Canada, China, the United States and the OECD countries as well as Britain, Mr Whelan finds these are always and in all places the categories that govern a good school. Faith, you will note, is not among them. The word faith is absent from Mr Whelan's index. It hasn't got anything to do with good education at all. The idea that, in good schools, "faith" is the determining factor defies a basic acquaintance with the evidence.

On the basis of no educational necessity, therefore, we avert our eyes from Academy chains that sneak in creationist teaching, or the London Oratory School, which gave extra weight to parents who had sung in the choir, served at the altar or arranged the flowers in church before Mass. Back on the West Bank, the Yesodey Hatorah Senior Girls' School in Stamford Hill wrote Shakespeare out of the curriculum on account of his anti-Semitism. The school was also found to have blacked out a question on evolution in a GCSE science exam.

Schools are selecting pupils on criteria irrelevant to education, and offering a curriculum with a gloss of obscurantism. Nobody worries about indoctrination in the vast majority of Church of England primary schools. It is where two peoples living parallel lives, on either side of a bank and a divide, are being schooled separately that the problem arises.

Religious certainty is incompatible with open inquiry; religion offers a closed answer to an ineffable question. What you believe in your own time is your affair but it is not relevant to the public education of children. It would be an easy matter simply to remove the right to religious selection. No schools would close and nothing would get worse. It would just be a modest removal of an irrelevant obstacle to good schools for children whose parents kneel before the wrong deity.

Philip Collins is a columnist and chief leader writer for The Times. He is also the chair of the board of trustees at the independent think tank Demos. Before joining The Times he was the chief speech writer for the Prime Minister, Tony Blair. This article was first published in The Times, and is reproduced here with kind permission of the author. The views expressed in our blogs are those of the author and do not necessarily represent the views of the NSS.