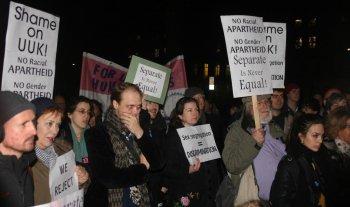 In reflection of the anniversary of the first publicised case of forced gender segregation at a British university, Chris Moos gives an update on the present situation within British universities.

This March 10th marked the anniversary of the first publicised case of forced gender segregation at a British university. At the event at University College London, several students, including myself, were physically assaulted and intimidated for sitting in the 'wrong' section. After we brought this issue to the attention of UCL, the Islamic Education and Research Academy (iERA) was banned from holding further events at UCL.

The repercussions of this incident, which resulted in the publication and subsequent withdrawal of the guidelines legitimising gender segregation by the representative body Universities UK, can still be felt in British universities today. After our protest in December, policy makers across the political spectrum positioned themselves clearly against gender segregation, including PM David Cameron, Labour shadow business secretary Chuka Umunna, and SNP MSP Stewart Maxwell. Despite this apparent victory of a coalition of the progressive left, secularists, human rights advocates and women's rights activists, including many Muslim women, the scale and scope of gender segregation at universities in the UK has hardly changed.

New evidence, which I will present here, suggests that gender segregation is not only tolerated, but often legitimised and institutionalised by the very universities and student representatives that are supposed to uphold and promote equality for all.

Firstly, the main organisers of gender segregated events on UK university campuses, like the aforementioned iERA, as well as other extremist organisations like the openly racist and anti-Semitic Hizb ut-Tahrir, Al-Muhajiroun of hate preacher Anjem Choudhary and the ultra-conservative Federation of Islamic Student Societies (FOSIS), which regularly hosts and promotes misogynistic, homophobic and violence advocating speakers, continue to operate on campuses, largely unchallenged by universities and students' unions. Interestingly, the very same organisations that work from a basis that explicitly rejects the notion of women's rights, like to portray gender segregation as a "right of Muslim women", despite reluctantly admitting that this claim does not even have a theological basis in Islam.

They are not alone. A poll by the Times Higher Education revealed that out of 46 universities that responded, 29 do not have prohibitions against gender segregation in place. Only a few universities, like Wolverhampton and Staffordshire, explicitly ban segregation. The Students' Union of the University of the Arts London has opposed calls to ban gender segregation, and claims it has the backing of its university. The SOAS University "Muslim Christian Dialogue" society has issued a statement of support for "both segregated and mixed seating in any event". At the same time, an attempt to outlaw forced or directed, but specifically not 'voluntary' segregation at the University of Edinburgh, was met with fierce resistance by the student body, including claims that disallowing segregation would be "Islamophobic" and "racist". Yet, the aforementioned Federation of Islamic Students Societies, which claims to be the "Voice of Muslim Students in the UK" and to represent 130,000 Muslim students, has itself issued guidelines on how to run a successful Islamic student society. In keeping with the orthodox ethos of the organisation, those guidelines prescribe to "maintain segregation between brothers and sisters, keeping interaction between them at a minimum".

Worryingly even some elected student officials go so far as to openly advocate segregation. Joe Killen, welfare and diversity officer at Goldsmiths Students' Union opposes bans on segregation based on an alleged "importance of segregation in political movements." The Women's Officer of King's College London Students' Union, Shaheen Sattar, who is also a National Union of Students delegate, has gone as far as demanding that "gender segregation should be respected, if not tolerated, in institutions of higher education", as it was "firm to the principles of Islam". Despite these efforts to agitate for gender segregation, the open promotion of gender segregated events seems to have diminished slightly, with fewer university societies advertising their events as 'segregated'.

Nevertheless, a quick internet search reveals that segregation continues to take place at many universities, including Keele University, Imperial College London, Salford University, Coventry University and Lancaster University. Although these events usually escape the scrutiny of the public, next to UCL, reports of gender segregation at London Metropolitan University, Leicester University (see also here) as well as Queen Mary University of London have featured in the national media. Notably, the latter event also included Muslim women being barred from addressing the male speaker directly.

At my own university, the London School of Economics, the picture is hardly different. Despite the claims of the Students' Union that segregation would "not be allowed", the Islamic Society regularly holds segregated 'brothers' and 'sisters' circles'. This is institutionally endorsed by the LSE, who recently inaugurated new Islamic prayer rooms, next to a 'multi-faith' room for all other religious students, encouraging segregation with the provision of exclusive 'male' and 'female' Islamic prayer rooms.

Now, some Muslim scholars suggest that the provision of separate male and female praying spaces in mosques is desirable, whereas others, like the Muslim Educational Centre of Oxford, do not. In fact, there are numerous examples of Muslims drawing on traditional and progressive Islamic schools of thought, like the Inclusive Mosque Initiative, who actively challenge segregation and encourage the full inclusion of women and LGBTQ people into acts of worship. As a place of progressivism and learning, it is hardly understandable why LSE would give its explicit endorsement to the segregation of prayer rooms to the detriment of existing egalitarian approaches within Islam, thereby side-lining progressive Muslims.

In any case, a university, especially a self-declared "secular" one, is clearly not a religious establishment. I was surprised to find out that segregation at LSE is not limited to prayer rooms. Last Friday, my friend Abhishek Phadnis and I attended the Friday prayers of the Islamic Society in an attempt to build 'interfaith' understanding and reach out to our fellow religious students. The meeting was completely segregated, with not a single woman among the 200-strong audience. This was despite of it not being held in a religious prayer space, but in an open access room that should be accessible and inclusive to all students at all times, no matter their gender.

The fact that members of staff have been found to be complicit in the enforcement of gender segregation is worrying, although not surprising. At the UCL event last March, my partner and I were refused access to the lecture theatre by an individual who identified herself as Dr Aisha Rahman and a member of staff of the UCL Chemistry Department. She said the segregation had been agreed with UCL and repeatedly refused us entry to the lecture theatre. In the face of instructions from an alleged member of staff (her employment was disputed afterwards by UCL, despite evidence to the contrary), we felt pressured into compliance.

LSE and UCL are not the only universities implicitly or explicitly condoning or enforcing gender segregation. An even more worrying example of official endorsement of gender segregation can be found at the University of Keele. On the Facebook page, students can be found discussing an event involving several religious speakers. As one of the student expresses that the Muslim speaker had displayed a "backwards mind-set" by saying that the cutting off of hands as corporal punishment was justified, and that men and women were different so must be treated as such, the university chaplain Reverend James Stewart takes it on himself to retort: "He said cutting off hands was acceptable as a punishment ONLY ONCE certain very specific, very extreme criteria were met. […] It's a cultural, not a "backward" mind-set." In the ensuing discussion, several students then go on to express discomfort about the fact that the event was ostensibly gender segregated. In what becomes clear in the following exchange, the university administration, in the form of Reverend Steward, does not only dismiss the concerns of the students, but actively defends gender segregation:

"Some cultures find it easier to stay within their gender groups, is all. […] They [Muslim women] are used to it, and feel protected in their gender roles. It does not impede their enjoyment of the event, but enhances it, as if they were more intermingled the sisters would have felt uncomfortable […] Sitting separate is not "wrong" and I will defend women to go separately if they feel more comfortable to do so […] "Many cultures do this - Sikhs in Gurdwara, many Churches in the past in the west, and now in the East. It isn't Islam telling them to do this, but their cultural inheritance. It does not abuse or disempower the women in any way, but rather the opposite. Maybe it challenges our Western expectations of what "equality" looks like, but to them it feels like being respected and valued for being a woman."

This is the most brazen statement yet of endorsement and legitimisation of gender segregation by a university administration. It is hard to engage constructively with all of the false assertions, smokescreens and fallacies produced in this paragraph. I will instead rely on the words of Lejla Kuric, one of the many Muslim women who have spoken up against gender segregation:

"A society based on equality must resist gender segregation with the same vehemence reserved for racial segregation. The provision of separate entrances for 'Brothers' and 'Sisters' to a University meeting is no less repulsive than the provision of separate entrances for 'Whites' and 'Coloureds'. […] Promoting segregation as a 'right' also prevents debate within the Muslim community and silences liberals, secularists and feminists who wish to challenge it. It tries to present as normative a conception of Islam that is misogynist and reactionary, and it seeks to marginalise those who disagree by attacking their authenticity as 'real' Muslims."

Whether it is UCL, Leicester, Queen Mary, LSE or Keele - if the aforementioned examples are a good indicator of the state of gender equality at British universities, university administrators and student representatives continue to fail their students miserably.

Chris Moos is shortlisted for the Secularist of the Year 2014 Irwin Award. He is a PhD student at the London School of Economics and the Secretary of the LSESU Atheist, Secularist and Humanist Society. The views expressed in our blogs are those of the author and do not necessarily represent the views of the NSS.

Chris Moos is a secular activist and member of the NSS Council. Follow him on Twitter @ChrisMoos_. The views expressed in our blogs are those of the author and may not necessarily represent the views of the NSS.