Publish and be damned 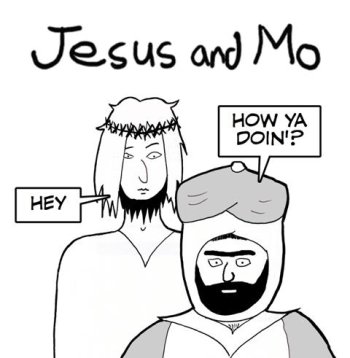 The media's refusal to show the Jesus & Mo cartoon emboldens professional offense takers at the expense of inoffensive satirists –and seriously undermines the principle of free expression, argues Abhishek Phadnis.

The Danish scholar Jytte Klausen's definitive book on the Danish cartoons affair, The Cartoons that Shook the World, has no illustrations, and two forewords to explain why this is so. The first, by her publishers, Yale University Press, admits that "inclusion of the cartoons would complement the book's text with a convenient visual reference for the reader" (you don't say). However, it whimpers that since "republication of the cartoons … ran a serious risk of instigating (sic) violence", it had decided against including the cartoons. The second, by Ms. Klausen, ruefully agrees. Yale University, you may recall, is the alma mater of that great American hero, Nathan Hale, whose courage in the face of imminent death (at 21), when caught spying for the Continental Army behind enemy lines, was immortalised in The Ballad of Nathan Hale:

The bureaucrats of Yale proved unworthy of that mantle, but at least they had the courage to admit they were scared. Those of us who have followed the British news media's coverage of theJesus & Mo affair this past fortnight have been denied even that closure. To recap, a Muslim mansaid that he was not offended by an innocuous cartoon, printed on the t-shirts of two students who had nearly been thrown out of a public university for wearing them, and had had to fight analmighty legal battle for the right to do so. For his trouble, this man received death-threats from well-meaning members of his community, and nearly lost his job because some members of that community disagreed with him about the nature of the cartoon. Yet the British media would have you believe that absolutely none of this justifies their showing you the cartoon in question.

Leading the case for the defence was the 'senior editorial team' of Channel 4, which defended its decision to censor Mo (with what looked, for all the world, like a large black egg) on the grounds that "the showing of the entire illustration … was not integral to the story". Given that the entire illustration was the story, this tells us only that the team would prefer to be known as obtuse than as invertebrate, and merits no further rebuttal.