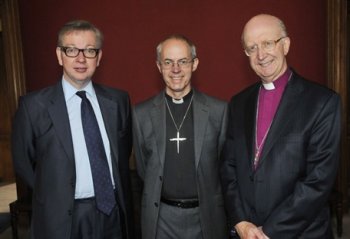 With the Church of England is on its last legs, it's about time its continued involvement in state education was called into question, argues Terry Sanderson.

The Church Times has been carrying a series of supplements over the last few weeks taking a "heath check" of the Church of England.

Most of the time it has had difficulty finding a pulse.

The statistics it has published, on attendance, age profile of members and finances, show a once-powerful organisation that is now on its last legs, but obdurately hanging on using the state-funded life-support machine.

The Church Times admits that its schools are now the CofE's "single largest engagement with the state" and that with the help of a sympathetic government, it intends to increase the numbers substantially in the next few years.

It repeats the unconvincing mantra that it is not using schools to evangelise or try to create new members for its dwindling congregations.

But everything it does indicates the opposite.

The General Synod resolution declaring that schools "stand at the centre of the Church's mission to the nation" says it all.

Is that what schools are for? Mission?

Look at the article in the Church Times supplement entitled "How to rescue RE" and you find suggestions that teachers should "Grab time from any subject by making cross-curricular RE work well."

Cross-curricular RE? That sounds remarkably like injecting religion into every lesson, ensuring that there can be no escape from it. You might well choose to withdraw your child from RE and collective worship, but you can't exempt them from all lessons.

And that's really what "cross-curricular RE" means – no option.

When Ruairi Quinn, the Irish education minister, last month suggested that maybe – at half an hour a day – there was a little bit too much religion in Irish schools and that maybe some of the time could be handed over for other subjects, he rapidly felt the full force of the Catholic steamroller.

Yet here we have it the other way round, with the Church of England suggesting that religion steal time from maths and science to push its ideas even harder at children.

The author of the Church Times article writes: "A teacher fromWalsall reports that linking RE to drama, dance and art has had good effects in her urban primary school. Many previously unenthusiastic staff became committed to RE because they see the creative side of the subject in action. And many creative pupils did their best work exploring sacred stories in Christianity, Judaism and Hinduism, through the arts." [Islam doesn't seem to figure here, for some reason].

Another suggestion from the same author: "At Hazlemere CofE Combined school in Buckinghamshire, the RE co-ordinator Susan Brice, has been getting pupils aged eight to 11 to plan reflective RE experiences. RE experiences for the younger children – such as working in pairs on blind-faith walking, life-journey planning, making a cross of lights (in this, the children heard the story of Jesus's forgiveness of even the people who killed him, and thought about how forgiveness is like a light and how hard we sometimes find it hard to forgive), and inviting parents and other adults to share in the experience."

Oh yes, there's nothing churches like better than blind faith.

There is a lot of talk of "spirituality" and its encouragement. Spirituality is, of course, a word that could have been invented for those who wish to sneak a heavy sectarian religious agenda into schools (and hospitals) under a benign-sounding banner.

It's amazing though, how "being spiritual" rapidly morphs into being Christian and thence into being Anglican or Catholic or Muslim or Hindu.

Whenever the word "spirituality" is bandied about in schools, you can be sure that the evangelists are at work somewhere.

So, we return to the strange anomaly of a church that hardly anyone goes to that controls a third of the nation's schools, uses public money to practice discrimination in staffing and pupil selection and blatantly proselytises children who cannot escape.

I'm utterly mystified as why we, as a nation, allow it to happen. The National Secular Society will continue to advocate an education system in which no religious organisation controls our state schools.