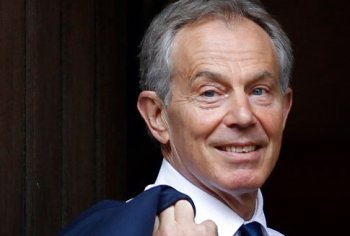 In reaction to Tony Blair's recent reflections on religious conflict, Terry Sanderson reflects upon the dangers of Blair's promotion of the "us" and "them" mentality.

Writing in last Sunday's Observer, Tony Blair repeated his mantra that the 21st century's wars will be fired not by "ideology" but by religious extremism.

It's not a new prediction, he's made it often before. And most of us would agree it is highly likely to come true. In fact, it is already true for large parts of the Middle East, Africa and Asia.

It is the opposite of what needs to be done.

Not only is it not the solution, but it is likely to make the situation a thousand times worse.

So what does Mr Blair recommend as the way to stop the world being consumed by religious fanaticism and violence? Why, more religion of course.

He thinks that people can be educated to understand each other.

Study religion and understand it properly and everyone will be able to live in tolerance and peace, he says. It is only people who don't truly understand their faith who "pervert" it and use it for malignant purposes.

Unfortunately for Mr Blair's argument, the people who are presently engaged in religious warfare are the ones most educated about religion. They are the ones who have studied it and come to the conclusion that their version is superior to all others and must be imposed on the ignorant unbelievers.

I think the ayatollahs of Iran and Saudi Arabia would be most offended by Mr Blair's contention that religious extremism springs from ignorance of religion. I think the imams who are currently brainwashing children in madrassas in Pakistan would think they know far more about Islam than Mr Blair does. And those who shout Allahu Akbar every time they fire off a mortar to kill more of their fellow Muslims or don a vest bomb go to mosque every day, pray five times a day and read the Koran intensively. People who claim that they know what is the "real" or "true" version of a religion are likely to be either extremely arrogant or themselves fanatics.

Yet let us look at the place where religion holds least sway – in Europe. Over the past few decades, since the defeat of Nazism, Europe has made a real effort to avoid warfare between its nations. It has created the European Union and an economic pact that has unified states for mutual (most of the time, anyway) benefit.

It is far from perfect, but since its inception, the prospect of war between those European nations that are part of it has never in history seemed more unlikely.

And what other factor may be involved in this extended period of European peace? Well, the fact that religion has lost its grip on the European mind. We have become more democratic, free of dictatorships and secularised. The Vatican – proponent of so many wars in Europe – is a shadow of its historical self.

A religious war between EU nations? Unthinkable. Even the troubles of Northern Ireland have, in the main, been tempered. It is only a small faction of fanatics (who, incidentally, take their religion very seriously) who feel the "problems" have not been resolved and would like to resume the bombings and assassinations.

Mr Blair, of course, thinks religion should become important again in Europe. He thinks we should all be forcibly educated about "our" religion as well as about "their" religion. This should preferably be done in "single-faith" schools, the present proliferation of which in this country is of his making.

But how can separating young people from each other on the basis of religion be a means of uniting them? How can the constant reinforcement of religious difference be healthy when you are trying to defuse religious tensions?

How can ignorance and extremism be discouraged when you have unregulated madrassas pumping extreme religion into the heads of the next generation of Muslims in this country? Something like 2000 of these undesirable institutions are operating in Britain and it is only when some brave parent complains publicly about their child being beaten that we get a glimpse of what is happening within.

It proceeds from the assumption that madrassas have had an unjustifiably bad press and are, actually, a good idea and should be encouraged and even supported by the state. Once that false premise is established, the rest of the report goes on to make the case for madrassas.

In doing so, the IPPR peddles one of the most insidious ideas about religious schools. It says: "a recent study has highlighted the potential for faith-based schools to promote community cohesion by engaging with the wider community. This is already happening within some communities where madrassas are working to increase integration within communities by building stronger networks with other faith and non-faith organisations."

The promoters of this approach seem blind to its utter foolishness.

The more we allow our schools to be religionised, the more we pander to the demands of "religious leaders" who are desperate to use our publicly funded education system to sustain themselves, the more divided as a society we will become.

So, no Tony Blair – we don't want more religion. We need less.

We need to stop using our schools to punch home the "us" and "them" mentality that is so dangerous in these times of religious mistrust. We need to bring people from different cultures and religions together under one roof when they are children and still relatively free of the suspicions and prejudices of their parents. If we want cohesion we have to give young people the opportunity to cohere. How can that happen when they never meet, except through artificially arranged encounters that, in themselves, simply emphasise difference?

Never has the "faith school" myth been so urgently in need of challenge. It is clear that the Church of England intends to turn its own (that is to say the taxpayers) schools into the equivalent of madrassas, increasing the emphasis on evangelism and proselytising methods.

So, as the Christians use schools to reinforce the message that they have the ultimate truth, the Muslims do the same in "their" schools. The Hindus do the same, the Sikhs do the same. They will deny it, of course, but that is the fact. What other purpose can there be for a single-faith school?

It is madness but while people like Tony Blair (and Michael Gove) have influence, we will be forever beholden to the "faith leaders" for an education system that is storing up big problems for the future.