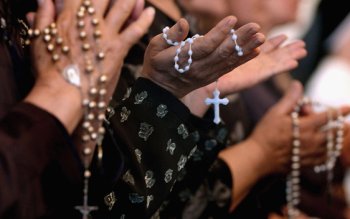 The UN's recent examination of the Holy See presented yet more evidence of the Catholic Church's responsibility for, and cover-up of, child abuse. Yet the Catholic majority remains persistently silent, argues Terry Sanderson.

After the drubbing over child abuse that the Catholic Church (in its guise as the "Holy See") got at the United Nations in Geneva earlier this month, you would think that Catholics around the world would be horrified and angry.

But they aren't. There was little evidence of a widespread furious reaction to the arrogance and dissembling that Vatican representatives exhibited when confronted with crimes so enormous in their reach and depravity that they're almost incomprehensible.

Then a cleric was caught red handed in Rome trying to launder millions of pounds in "false donations" through the Vatican bank.

In the USA, the Archdiocese of Chicago has released thousands of pages of documents that reveal how its hierarchy routinely covered up child sex abuse and shuffled abusing priests from one diocese to another. The scale of it beggars the imagination

But no one seems to want to know about it. Catholics are, reportedly, rushing back to church, pouring money into its coffers again and feeling generally quite good about things now that they've got Pope Francis.

Ah yes, the smiling old granddad who is so good at making platitudes sound important and staging stunts that draw attention away from real issues.

Why are Catholics so easily seduced by this man? Why have they suddenly lost their concerns about child abuse, attacks on abortion rights, bans on contraception and Vatican gay-bashing? Do they really still think that he is going to do anything about any of the issues that appalled them when the previous Pope was on the throne?

Well, according to one writer – they never cared about those issues in the first place.

In a fascinating essay in The Week, Damian Linker explores what has been described as Catholic cognitive dissonance – the way that Catholics appear to be able to overlook the wickedness of their Church and screen out the evil.

They just want to feel good about being a Catholic, and Pope Francis delivers on that front. They want to cheer not jeer and so they don blinkers that permit them to see only the Pope.

An example of this can be seen in a film recently released called "Philomena" starring Judi Dench. It tells the story of an Irish woman who, as an unmarried but pregnant young girl was consigned to a Magdalene Asylum. There her child was taken away from her and sold for adoption to rich Americans. She was then kept in slavery for another four years, to pay the nuns back for their "kindness".

As an elderly woman Philomena has never forgotten her stolen child and with the help of a journalist, she goes in search of him. I won't spoil the story – which is true and takes many unexpected twists and turns – but needless to say, it does not show the Catholic Church in a good light. Its cruelty to this woman, and thousands like her, was scandalous.

And yet even so, she refuses to condemn the Church. She refuses to blame the nuns that ruined her life. And when the atheistic journalist rails against the religious fanaticism, she calls him a "feckin' eejit".

So what is the Catholic Church for? How does it maintain its grip in this way, even when it inflicts personal cruelty?

My own thought is simply that the Church has perfected the art of childhood indoctrination. "Cradle Catholics" often find it impossible to let go of their religious "identity". They are wracked with guilt if they are even vaguely critical of the Church, and they become angry and defensive if others are.

That is why the Catholic Church puts so much emphasis on controlling education wherever it can.

Just about every concordat that they have signed with nations around the world gives them the right to control education. They start the process early and they reinforce it ruthlessly. Even in Britain it is acceptable for children in state schools to be made to learn the catechism.

Some Catholics will be infuriated by this blog piece. How dare I suggest that the Church harbours evil or that its hierarchy is infested with wrongdoers? It seems that sometimes even sensible people cannot see beyond their need to make excuses for activities that would be unforgivable in any other context.

There is even one Catholic blogger who this week wrote an article defending the wartime Pope's concordat with the Nazis.

And I fully expect to be trounced by "Deacon Nick" on his blog Protect the Pope because he won't have a word said against the Holy Church however badly it behaves.

It will be interesting when the first figures are released about Mass attendance since the coming of Pope Francis. Will all those who have abandoned the church under Benedict now return, or will they stay away simply because they have realised that they don't believe in it any more?