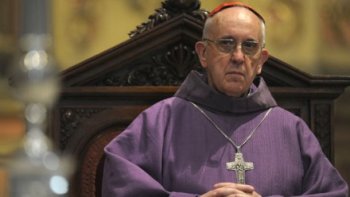 The Vatican's refusal to provide information requested by the United Nations on the alleged sexual abuse of children could mean Pope Francis's honeymoon period ends in ignominy, just like his predecessor, argues Terry Sanderson.

Did you know that the Pope "sneaks out" of the Vatican at night dressed as an ordinary priest so that he can minister to the homeless and destitute on the streets of Rome?

Did you know that Pope Francis once worked as a bouncer at a nightclub?

How wonderful – he's just like one of us – a working man.

As the propaganda piles up, Pope Francis basks in the adulation of the uncritical masses.

But wait. What's this? The sex abuse scandal that so tormented his predecessor seems to be emerging again after being swept under the rug during Francis's honeymoon period.

The Holy See (the political wing of the Vatican) has at last responded to questions put to it by the UN Committee on the Rights of the Child about the global issue of child rape by priests.

Or, more accurately, it has not responded. It says that it has nothing to do with what goes on in the dioceses and parishes of its churches. Therefore it cannot be held responsible in any way for the unspeakable things that some of its priests do to defenceless children.

And just when the Vatican thought it had distracted us from the horrors that thousands of its priests have perpetrated, it all starts slithering back again.

The Los Angeles Times has carried out an investigation into Cardinal Roger Mahoney and his decades-long cover-up of child rape by priests. The exposé is based on "nearly 23,000 pages of internal documents from the Archdiocese of Los Angeles and various religious orders that were made public this year in compliance with court orders". And even then, only in the face of bitter opposition from the Church.

The paper revealed in an editorial that, following the investigation, it had received an unprecedented number of letters from readers condemning the Church.

Meanwhile, more cases emerge all round the world. So many in fact, that news of them hardly gets any further than local newspapers any more.

And sometimes the sheer spitefulness and cynicism employed to evade paying compensation to victims is breath-taking, especially from an institution that purports to dictate morality to the rest of us. In Australia a man who is terminally ill and who was sodomised repeatedly by a number of priests has won compensation, but a year later he has not seen a penny of it. Why is the church delaying?

In Minnesota, a court has ordered a diocese to hand over the names of 33 priests who are suspected of abusing and raping children. It has only taken 30 years to get to this stage – and the names haven't been handed over yet.

It's not that the Vatican is unaware of the problem – as its chief prosecutor of paedophile priests has made clear. Father Robert Oliver says, "Rome is 'well aware' of how frustrated many people are with perceived confusion about how to hold bishops accountable when they're accused of failing to make a 'zero tolerance' policy stick and hopes a solution will emerge from debates over curial reform under Pope Francis".

Haven't we been here before? Didn't Benedict promise that reform would come if we were patient? Well, we were patient (in some cases, 30 years patient) and nothing much happened. Ineffective "zero tolerance" policies were supposedly introduced, but still the cover-ups continue.

Is Francis going to be any different? Last week he had an opportunity to at least apologise for the disgusting record of his Church. At a meeting with Dutch bishops he was supposed to say (according to notes handed out before the meeting) "I wish to express my compassion and to ensure my closeness in prayer to every victim of sexual abuse, and to their families; I ask you to continue to support them along the painful path of healing, that they have undertaken with courage".

In the event, he didn't say it and preferred instead to just talk generally with the bishops who represent a country with its own major abuse scandal. A public inquiry recently showed that tens of thousands of children had been raped by Dutch priests, and now the church is paying out millions in compensation.

In return, the bishops told the Pope that the Catholic Church is dying on its feet in the Netherlands. Hundreds of churches have closed and more than 23,000 Catholics quit the Dutch Church in 2010, the peak of an exodus in which an average 18,000 have left each year since 2006. (This year, however, only about 7,500 had left by October.)

And so, as we are regaled with tales of Francis's marvellous humanity, his love of the poor and suffering, the tens of thousands – maybe even millions - of victims around the globe wait and hope that something will change. Francis seems too busy being adored at present to be bothered with them.

When one bishop asked a victim who had taken him to court "What can I do to make it better?" The victim replied: "Give me back my childhood".

That is the scale of Francis's problem and if he isn't careful, his glorious honeymoon is going to end in ignominy, just like his predecessor.