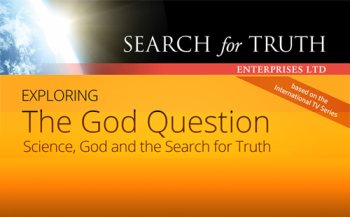 "To be sure, Darwin's theory of evolution is imperfect. However, the fact that a scientific theory cannot yet render an explanation on every point should not be used as a pretext to thrust an untestable alternative hypothesis grounded in religion into the science classroom or to misrepresent well-established scientific propositions."
Judge John Jones, Pennsylvania 2008, Kitzmiller et al v Dover Area School District.

Earlier this week I went to the launch of the God Question in the memorial chapel at Glasgow University, a subject about which I wrote in an earlier blog. This is a series of slick and expensively produced DVDs and workbooks that pitch science against God, claiming to review the evidence for and against the existence of God and to leave viewers to draw their own conclusions.

I was advised by the producer that, to the extent that there were any references in it to young earth creationism (YEC), it was only to make a point of ensuring its inclusion as one line of argument. He added that he felt the YECs, with whom he held no truck, had muddied the waters and got in the way of a valid and necessary debate that this new resource was positioned to present – namely to what extent, if any, science had destroyed belief in God, or whether science left room for God, and perhaps even revealed the hand of God at work. When I asked him to tell me who the sponsors of the programme were, he declined to answer, while assuring me I should read nothing Machiavellian into their desire to remain anonymous.

Professor Richard Dawkins is named at the outset of the presentation as the villain of the piece, with his book "The God Delusion" and Channel 4 series "The Root of All Evil?" cast as the motivating factors behind the production of the God Question. Professor Dawkins is listed as a contributor to the God Question, although the clips of him used in the presentation appeared to be culled from YouTube. No doubt Professor Dawkins will be reviewing this resource himself. As I sat through the presentation, it proved to be everything I had initially suspected it to be, namely a paean to Intelligent Design (ID) and whether the evidence — scientific evidence — pointed to the universe being a series of chance happenings or the result of the intervention of a creative mind behind the processes at work.

Having followed the ID debate closely, the presentation was all too familiar, with the room for God presented as a valid alternative view, or perhaps even conclusion, to pure scientific arguments. This was on the basis that many eminent scientists are also religious believers, and so this justifies room for debate around the need for a creator or creative mind at work behind the universe. In the Cosmos section, we were asked to marvel at how swiftly the universe became ordered after Big Bang, with established laws of physics set down such that had the quantities of the basic elements in the universe been even minutely different to what they are, there would be nothing. And how could something as awe-inspiring and mysterious as the universe and the human brain spring from nothing? As I listened I wished that the producers had asked Lawrence Krauss to contribute to their programme on the basis of his seminal work "A Universe from Nothing" which addresses that issue for once and for all, not least in reviewing what is meant by 'nothing'. It seems a huge mistake on their part not to include Professor Krauss's work.

In the evolution section, we were told that God versus Darwin was a false choice, and the reality was much more complicated than that. We were encouraged at various points to consider whether everything we knew about the universe, or evolution, or the human brain and consciousness, was the subject of chance and random occurrences, or evidence of intention and purposeful design. We were told that the evidence must be allowed to speak for itself, which does rather depend on what and whose evidence is presented, how it is presented, and by whom.

We were also informed that the 'God' in question was not the 'magician in the sky', and certainly not the God of the YECs, but while being told what this God wasn't, we were never told what this God actually was! There was no definition of what or who was the 'God' in the title, leaving the audience with the inference that 'God' was the convenient name for the mind at work, the creative input that manifested itself in the specific design that lay behind the universe, rather than the universe being the outcome of a series of chance happenings with no purpose.

We were told that the programmes presented the evidence from both sides of the debate. The first problem is that this presupposes there is a valid debate to be had in the first place which I would argue there is not. The second problem is that the two sides of the debate are not equally presented. Science is put on the spot, with which I have no problem. However, the issue of the 'designer' is not subjected to the same intensive forensic process, leaving the viewer with nothing more than the notion of an unseen guiding hand, occasionally in a 'God of the Gaps' scenario. The scientific evidence provided by science is analysed to justify what is presented as two equally valid alternatives, one of which is in fact anti-science!

The closing address to the audience was given by Mike McGrath, the head of the Scottish Catholic Education Service who stated that the God Question had 'huge potential' and that as well as the subject matter being raised in RME (Religious and Moral Education) classes it was also valid to discuss the issues raised in science classes. This is further confirmed by an advertisement for a national conference today in Scotland organised by SCES for Catholic schools to review the product, which states:

The conference is aimed at teachers of Religious Education and teachers of Science in Catholic schools. In both curricular areas teachers are expected to engage senior phase students in exploring the links between Science and Religion and in addressing significant moral and ethical issues in today's world. The conference will illustrate how useful this resource can be in supporting this area of learning and it will address ways in which Catholic schools might extend teachers' understanding of Church teaching on some challenging issues."

And so back to the quote at the beginning of this blog from Judge John Jones in Pennsylvania in December 2008. Intelligent Design may not have wormed its way into the science classrooms in Dover County, Pennsylvania, but five years on it is now back in shiny new packaging, labelled as 'evidence based and balanced' and getting into the science classrooms in Scotland. And with the enthusiastic support of the Church of Scotland and the Scottish Catholic Church, we also now know that turkeys definitely do not vote for Christmas.