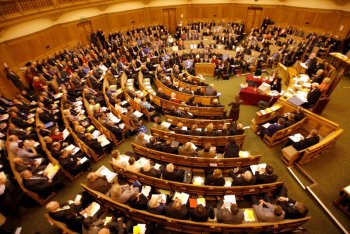 The Church of England's intention is clear. State funded schools will be regarded as churches – and serve as pulpits for evangelisation, argues Stephen Evans.

Parents and their children may have deserted the pews in droves – but that doesn't really matter anymore, according to John Pritchard, Bishop of Oxford and Chair of the Church of England's Board of Education. "We don't need to attract them to church" he declared, "they're already there, if we embrace our church schools fully."

His comments, made in a speech to this week's Church of England General Synod, echo the former Archbishop Rowan Williams' declaration that "A church school is a church." Despite being publicly-funded, state schools are seen by the church as the primary method of recruiting the next generation of Anglicans.

At this week's Synod two separate, but related, motions provide a good reason why it isn't a good idea to allow religious organisations to run schools.

The former archbishop of Canterbury, Lord Carey, told the Synod that their Church was "on the brink of extinction." Lord Carey laid the blame at the feet of Church leaders and said they should be 'ashamed' of their failure to bring youngsters in. Dr John Sentamu's message was even starker. Without evangelism, he said, the Church is going to "die".

With this warning ringing in their ears, the Synod overwhelmingly passed a motion put forward by Archbishop Sentamu which makes evangelism, and making new disciples, a priority for the Church. That is, of course, their prerogative, but when our state education system is very much part of this plan, we have a problem.

The evangelism motion was based on a discussion paper circulated prior to the vote, which lists the discipline of 'catechesis, as one of the 'Seven Disciplines of Evangelisation'. Catechesis, described by the Church as "teaching and learning faith", is more akin to religious instruction than religious education. According to the paper, "Catechesis of adults and children and young people is absolutely critical to the growth of the church." The Church say it is a discipline exercised in the pulpit, in pastoral encounters, and, you guessed it, in schools.

The paper asks how the place of catechesis in Church of England schools be strengthened. In order to answer this question the Church is to create a task force which will "support Archbishops in taking forward the call to evangelism."

But a second Synod motion, concerning church schools, already sheds some light on how this will be achieved. The motion affirmed "the crucial importance of the Church of England's engagement with schools for its contribution to the common good and to its spiritual and numerical growth."

The motion invited dioceses to draw up plans for promoting the widest possible use of a "new online resource" for teaching Christianity, not only in Church schools, but also in non-Church schools.

According to the Church, "There is no expectation of commitment but learning about and engaging with the faith is a necessary pre-requisite for commitment especially for children and young people whose only experience of church is through the school."

The Church of England's clear intention here is to ramp up the evangelisation, not only in Church schools, but also in non-faith schools. They realise that the indoctrination of children, however subtle in its execution, is absolutely critical to its survival.

This results in our state education system being used by the Church to manipulate children and young people, in order to meet its own needs. For our legislators to allow this is both morally objectionable and intellectually irresponsible.

Unfortunately, as far as education policy is concerned, we can expect nothing but complete and utter deference towards the Church from our elected representatives, who appear to still be living in 1944, when the current settlement between the Church and the State with regard to education was negotiated.

State education has since become a playground for all manner of religions and denominations – and despite being one of the least religious countries in Europe, huge swathes of our education system being under religious influence – and in the case of the Church of England, being used to prop them up.

Comments by the Education Secretary, Michael Gove, recently indicate that he intends to be as accommodating as he can in helping the Church in its ambitions to expand its influence in education. He said in parliament recently: "We praise and cherish the role of the Church of England in making sure children have an outstanding education. I welcome the [Chadwick report on church schools of the future] and look forward to working with Bishop John Pritchard to extend the role of the Church in school provision."

It seems that our education system is to be placed increasingly in the hands of proselytising priests. Parent power — systematically applied — is the only way to resist this.