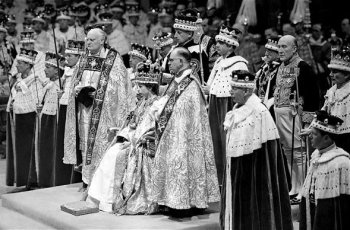 The day after we announced that we were seeking lawyers' opinions on the Human Rights implications of the coronation and accession oaths, one of which, for example, requires the monarch to uphold the "Protestant religion as established by law", the Daily Telegraph published an article about Prince Charles's approach to religion. It seems the heir to the throne might share at least some of the NSS's view that Britain is a much more diverse society now than when his mother was crowned in 1953 and that this should be reflected in any ceremony that marks the beginning of his reign.

Of course, Prince Charles would probably want a "multi-faith" coronation, whereas we would like a properly secular one that placed any religious element the monarch wanted in a service supplementary and separate from the constitutional investiture.

Back in 2008, Rowan Williams, the then-Archbishop of Canterbury also seemed to be in agreement that "it wouldn't be the end of the world" if the Church was disestablished. He told the New Statesman: "I think that the notion of the monarch as supreme governor has outlived its usefulness. I believe increasingly that the church has to earn the right to be heard by the social world. Establishment is just one of those things that make it slightly harder."

This legal and constitutional element of the coronation should be carried out on secular premises, perhaps in Buckingham Palace or Westminster Hall, and then if Charles wants to go to church or mosque or temple there's no reason why he shouldn't. But that would be his personal choice in his own time and would have no constitutional significance.

A secular coronation would take into account not only the fact that some 7% of the population are of faiths other than Christian, but also that a third (more by some measures) of Britain now regards itself as non-religious. Indeed, as NSS researcher Barry Thorpe has found, Britain's current investiture of a monarch with such overt religious associations is an anomaly within the context of the rest of Europe.

We could retain the pomp, the Golden coach with its liveried footmen and the fireworks and the red-coated soldiers with their plumed hats. It seems Britain likes a touch of Ruritania from time to time when we can wave flags and watch a grand procession.

But if we are to retain a monarchy in this country (and many think we should not, although that is not part of the NSS's agenda) and the monarch is to be head of state, then he or she should not also be ex officio head of the Church of England, or any other particular religion or denomination. That would be a worthwhile step closer to asserting we're all included as equal citizens and our religion (or lack of it) has no bearing on our constitutional status.

There are all kinds of complications involved in the monarchy's relationship with Scotland and with the Catholic Church. These are anomalies that have accumulated through history and realistically are unlikely to be corrected before the next coronation. It would all be made a tad easier were Scotland to opt for independence (not that we are advocating that).

The Church of England, of course, does not want any change from the situation as it was in 1953. Its reaction to the newspaper reports of our legal consultations were spiky and had a sort of panicky ring to them. Instead of justifying their continued presence on the establishment they launched a rather pathetic attack on the NSS.

Attacking their critics is an easy way to avoid a question they would prefer was not asked. But if Britain is to enter the 21st century as a modern democracy, it is an essential question and a debate that must be had.

Our questioning of the legality of the coronation oath certainly seems to have started that debate among some, with even the rattled Church of England source saying he feared legal action could be feasible. Some of the thousands of comments from people "below the line" of the newspaper reports were not very well informed. However, most came down as either seeing this as "yet another" attack on their religious beliefs from the NSS (it is not) or recognising that the world has changed significantly since 1953 and our constitutional arrangements must change with it.

We are simply asking that the next coronation is much more inclusive and echoes the reality of modern-day Britain – which is no longer one nation under God. It is one nation under many gods –and for an increasing number, no God at all.