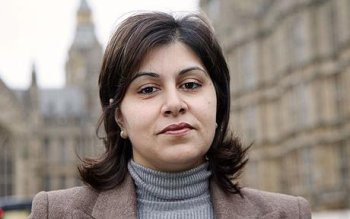 Baroness Warsi, the Coalition's "Minister for Faith" is no friend of the National Secular Society. Why should she be? Her role is the very antithesis of secularism.

For a Government Minister whose brief is to promote religion in politics, she does not seem to understand much about secularism. Or if she does, then she is actively misrepresenting it. She tries to give the impression that secularists in some way seek to deny the right of religious people to express their faith and that there is some kind of repressive agenda in secularism. There is not.

Does she not know that the American constitution is secular? Is the US Government repressing religion? Or has secularism protected America from the sectarian warfare and bloodshed that has plagued Europe for millennia?

In her anxiety to promote the idea that religion and government belong together, Warsi makes statements without factual basis, distorts statistics and edits out inconvenient truths.

Her latest masterwork was a speech full of divisive rhetoric that she delivered to a "Faith in Politics" conference at the University of Cambridge Churchill Archives. You can read the whole thing here.

Let's have a look at some of what she says:

"You only have to look around this building to see the evidence. Winston Churchill's letters, speeches and papers make repeated references to faith."

This is true, but they were not always complimentary. Take this from his book The River War:

"How dreadful are the curses which Mohammedanism lays on its votaries! Besides the fanatical frenzy, which is as dangerous in a man as hydrophobia in a dog, there is this fearful fatalistic apathy. The effects are apparent in many countries, improvident habits, slovenly systems of agriculture, sluggish methods of commerce and insecurity of property exist wherever the followers of the Prophet rule or live. A degraded sensualism deprives this life of its grace and refinement, the next of its dignity and sanctity. The fact that in Mohammedan law every woman must belong to some man as his absolute property, either as a child, a wife, or a concubine, must delay the final extinction of slavery until the faith of Islam has ceased to be a great power among men.

"Individual Moslems may show splendid qualities, but the influence of the religion paralyzes the social development of those who follow it. No stronger retrograde force exists in the world. Far from being moribund, Mohammedanism is a militant and proselytizing faith. It has already spread throughout Central Africa, raising fearless warriors at every step, and were it not that Christianity is sheltered in the strong arms of science, the science against which it (Islam) has vainly struggled, the civilization of modern Europe might fall, as fell the civilization of ancient Rome."

Lady Warsi brushes this inconvenient truth aside by saying:

"Churchill may have had some interesting things to say about Islam. But I will leave it to Warren Dockter to address that issue specifically, and I am interested to read his new book on the subject. Personally, I think Churchill's own removal of his passage on Islam from 'The River War' shows that he revised and contextualised some of these views. After all, this was a man who argued for 'a spirit of religious toleration'."

Of course, Churchill wrote in other books about the evils of "Mohamedanism" which he didn't retract. Some of the things he wrote would, these days, get him locked up. That Baroness Warsi can put Churchill up as an exemplar of religious tolerance is a measure of her delusion. Or maybe her dishonesty.

Churchill was convinced that Christianity was the true "religion of peace" and, as he wrote in The Story of the Malakand Field Force:

"In each case civilisation is confronted with militant Mahommedanism. The forces of progress clash with those of reaction. The religion of blood and war is face to face with that of peace. Luckily the religion of peace is usually the better armed."

Later in the speech Baroness Warsi claims that 78% of this country "profess a religion", and that during the previous Labour governments "faith was being sidelined, even dismissed".

This claim is based on the oft-quoted comment by Alistair Campbell that Tony Blair's government didn't "do God". But to claim that Tony Blair or Gordon Brown were 'anti-religious' is manifestly untrue. Campbell was saying that the Government was secular not anti-religious – which is what Warsi would have you believe.

She now says that the Coalition is:

"Giving religion a voice at the top table. Not a privileged position, but an equal informer of the debate. This is further proof, as one commentator put it, that the Coalition is the most pro-faith government in the West."

We don't mind the Government being "pro-faith" (but not one particular faith) but we care very much that religion is an "equal informer" at the top table. We know what that leads to.

Baroness Warsi, however, seems able to edit from her memory the sour and bloody history of this country during periods when religion and government were as one.

She makes the bland claim that "people who do religion, do good".

Sometimes they do. But, as Andy McSmith points out in the Independent there are plenty that don't:

"Osama bin Laden, the Taliban, the Lord's Resistance Army in Uganda and the perpetrators of the 11 September atrocities all claimed in their different ways to be doing God's work. When Bloody Mary had Protestants burned alive, or Oliver Cromwell drowned Ireland in Catholic blood, they, too, were 'doing God'."

The religious privilege on which Baroness Warsi is so keen, undermines British democracy. Even though no-one ever elected her, Lady Warsi claims to speak for the nation when she says we need more religion in schools and more public services handed over to religious groups to run.

Perhaps if she wants to keep her seat in Government she should stand at the ballot box and ask the electorate what it wants for the country, rather than relying on God to tell her what it wants on their behalf.