Letters to editors: a useful tool for campaigners 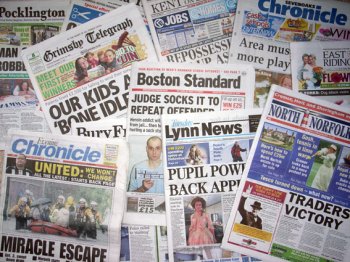 When you're active in campaigns that aim to change things in society, it can often be difficult to get your voice heard in the media. Groups with a message that seems radical or a threat to the status quo might be treated with suspicion, even hostility, by editors.

Secularists fall into this category. We are proposing something that is, actually, positive and well-established (the United States has had a secular constitution for centuries, the French have had theirs since 1905 and many other nations have a formal separation between church and state). But somehow some religious people have got it into their heads that we are threatening their "religious freedom", that we are trying to destroy their faith.

Consequently, we have a lot of opposition to deal with. Sometimes it is irrational, sometimes it has some basis. But it is difficult to get a balanced hearing when religion is so ingrained in the media, with special correspondents devoted to it on most newspapers and the BBC having its very own dedicated department.

They won't let us on Thought for the Day (or Pause for Thought) and our representatives are always given a tough ride when they do manage to get interviews on radio and TV.

But there is one area of the media where we can more easily get our voice heard and that is in the correspondence columns of newspapers. We all have opinions and this is one way of getting them out for discussion.

We have always encouraged secularists to make full use of the letters pages to contradict some of the wilder claims made by religious spokespeople (who long ago learned to dominate those columns). And we repeat our plea – use your local paper to get the message of secularism into the mainstream for debate. All of us can do our bit in this area. Just be rational, well-informed and brief.

And to give a little encouragement, here are two letters of interest from secularists that have been published this week, and one from a Christian as an example of the kind of thing that needs to be rebutted.

The first was from Charlie Klendjian, secretary of the Lawyers Secular Society, who wrote to the Law Society Gazette in response to this book review:

"I see the Gazette is wading into the choppy waters of religion and the law (Book Review: Islam, Sharia and Alternative Dispute Resolution, 21 October).

"The reviewer, Mr Thomson, says 'English law and sharia law are two distinct jurisdictions'. Yes, 'distinct' is certainly one way of putting it. The distinction between English law and sharia law is hardly trivial: even in the context of alternative dispute resolution, rather than a penal code, the difference can mean eye-watering consequences for domestic abuse of women, for gender equality generally and for the rights of children. Worryingly, although Mr Thomson recognises these two jurisdictions are 'distinct', he doesn't tell us which one ought to take precedence or indeed which one he prefers.

"He goes on to talk of the two jurisdictions 'enjoying a mutually positive interaction and reasonable accommodation'.

"I beg to differ. There is nothing positive about a legal system such as sharia, which routinely and explicitly treats human beings who happen to be female as second-class citizens, and which does not give paramount importance to the interests of children in family law matters. Accommodation here is merely a polite word for appeasement.

"One definition of a country is a set of people all subject to the same obligations and all enjoying the same rights. Accommodating sharia law makes a mockery of that noble principle. It sacrifices the priceless idea of legal equality on the high altar of 'cultural sensitivity', effectively sanctioning lower-grade legal status for those people who are considered different. This is the very antithesis of a good quality legal system.

"English law should not — it must not — accommodate sharia law. Equality before the law has served humans very well and I see no reason whatsoever to depart from it. I would very much hope that other lawyers might agree with me on this.

"Through the Lawyers' Secular Society and my involvement with similar organisations such as the National Secular Society and One Law For All, I have met countless women who came to the UK precisely to escape sharia law, only to see it politely sanctioned here with chillingly neutral words such as 'sensitivity' and 'accommodation'.

NSS member Veronica Wikman wrote this to the Scotsman:

"It is difficult to persuade an adult who has been raised outside a religious environment to accept the claims made by monotheistic religions. It is, therefore, in the interest of evangelising religions, such as Christianity, to access children. Due to their natural immaturity, children are easy to mould and can be taught to adopt a reverential and unquestioning attitude towards religion and religious figures of authority.

"Religious belief is falling quite rapidly in Scotland. According to the latest census, the number of non-believers has now grown to 37%, outnumbering the members of the Church of Scotland. Consequently, the number of children enrolled in Sunday school, i.e. the next generation of church-goers, is also falling.

"This is a big problem for the churches, which is why the practise of automatically enrolling school children in state-sponsored prayers and worship (religious observance) is so appealing for them. While it is understandable that the Church of Scotland and the Catholic Church would rather retain their power and influence over our state education system and not give up their privileged position, it is unacceptable and indefensible.

"Religious observance equates to religious indoctrination. Granting unelected religious representatives seats on our education committees is an abuse of the democratic process.

"No amount of euphemistic language from the likes of Michael McGrath, director of the Scottish Catholic Education Service, and Rev David Robertson, director of Solas Centre for Public Christianity (Friends of The Scotsman, 25 October), is going to change these facts."

On the other hand, the lead letter in last week's Church of England Newspaper came from Philippa Clark of Birmingham. It is when we see this kind of thing that we need to get tapping out our responses:

"I read the article "Evangelicals attacked for school work" (18 October) about the report produced by the National Secular Society (NSS) and noted there was response from only one of the groups mentioned in it. This organisation, the NSS, seems to have influence way beyond its size with its self-selected role of attacking Christianity in the public sphere at every opportunity.

"When is any senior bishop going to stand up and proclaim that we have a great national heritage entirely based on the Christian faith? When is the Church of England going to start resisting secularism in all its forms and the incursion of other faiths? There is no other way to maintain freedom for all in our country. As Peter Mullen wrote in his article: "In other words, if Christianity goes, the lot goes with it."

"I hope everyone remembers that one day we will all be held accountable for our actions by almighty God."

It's beholden on all of us to argue against this kind of thinking which is, unfortunately, increasingly familiar in the media. Please remember, next time you open your local paper – it has a ready platform to inform your fellow readers about the benefits of secularism, and to reassure religious people that we aren't out to get them. Do use it.