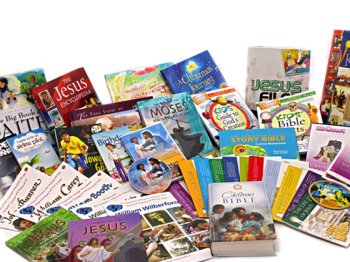 A report published this week by the National Secular Society has shone a much needed spotlight on the activities of evangelical Christian organisations operating in our children's schools.

The report reveals a concerted effort from evangelical organisations in the UK to target publicly funded schools as bases to promote the Christian message to young people, most of whom would otherwise have little or no contact with the Church.

Evangelical Christians can be a resourceful bunch. Packaging their evangelism as an 'educational resource', well-organised and sometimes well-funded evangelical groups and individuals are busy in schools pursuing their missionary objectives to 'bring children to Jesus' by providing schools with subjective and manipulative teaching resources, delivering lessons (not only as part of RE), and by preaching to pupils during schools visits.

At their worst, evangelists can turn school classrooms into pulpits to preach their own interpretation of the gospel. Often, however, aware of the need to justify their activity in schools on educational grounds, their approach is much more surreptitious, but no less manipulative.

The duplicity of their approach is well illustrated by this observation from one Christian schools worker:

"[evangelism is] the dark shadow in the closet of schools work. To the churches we talked evangelism. To the Head Teachers we talked education. We prayed the two would never meet."

I don't doubt for one minute that Christians, motivated by their faith, are carrying out valuable youth work up and down the country. I'm also aware that pupils' education can be greatly enhanced by the input made by external contributors. But, there is a clear clash of agendas between schools — whose purpose is education — and evangelical groups — whose primary concern is, quite clearly, evangelisation.

For example, one of the groups active in schools, Youth for Christ, regard it as their mission to "raise up lifelong followers of Jesus". According to its website: "Taking the Gospel relevantly is what we do. That has always been our vision, and it always will be...until every young person in Britain has heard and responded to the good news of Jesus Christ."

Another organisation active in schools is Scripture Union. It describes its mission as "to go and make disciples of Jesus Christ among children". The group's goal is to ensure "that all may come to a personal faith in our Lord Jesus Christ, grow in Christian maturity and become both committed church members". With the aim of "reaching the unreached with the gospel", Scripture Union says working in schools is one of its main priorities.

Another group, Prayer Spaces in Schools (PSiS), has been busy setting up almost 600 'prayer spaces' in schools (at last count). The initiative has reached more than 100,000 children and young people, many of whom "have prayed personal prayers for the first time in their lives", say PSiS.

Prayer Spaces in Schools is an initiative of 24-7 Prayer, an organisation that exists "to reconcile the world to God in Jesus Christ". According to Prayer Spaces in Schools, its work helps to enable young people to meet many of the requirements for religious education in primary schools. 24-7's vision for the UK is to "establish a national project working with teachers to serve the national curriculum so that hundreds of thousands of students can swap talking about God in Religious Studies classes to talking to Him".

So there we have it. Instead of talking about God in religious education, what these groups really want to see is pupils talking to Him.

For many, the point of religious education isn't really to teach objectively about religion and belief, it's about teaching children how to be religious – but surely that's purely and squarely a parental responsibility, for those who want it, and certainly not the role of a state education system.

Worryingly, gaining entry to schools appears to be a relatively easy process for evangelicals on a mission. According to Open the Book, a national organisation that sends teams of Christians from local churches into schools to perform dramatised Bible stories:

"More and more people are grasping the simplicity with which churches can extend and enjoy their ministry to every child in their locality – especially to the 'unchurched' and their families."

In some cases, it seems likely that visits to schools are being facilitated by sympathetic teachers. But often, unsure as to what they're supposed to be achieving in 'collective worship' and RE, schools are naively welcoming offers of help when local evangelical groups come knocking.

Given the rapidly changing religious landscape in Britain, and in particular the diminishing interest in religion amongst young people (and their parents), it is easy to see why evangelical groups regard access to schools as essential if they are to raise the next generation of believers.

But the presence of such groups in schools undermines the rights of parents who rightly expect a state education for their child that doesn't run counter to their own religious and philosophical convictions. There is therefore a need to question and scrutinise the activities of evangelical organisations and individuals working as external visitors in our schools.

The Department for Education, who, let's face it, have been caught severely lacking when it comes to regulating the activities of religious groups involved with schools, could lead the way by issuing clear national guidance to schools setting out best practice for working with external visitors and contributors. Schools also should publish their own robust external visitor's policy which expressly forbids proselytizing and evangelism.

But ultimately, what we need is a more secular approach to education generally. A removal of the legal obligation to provide worship, and a replacement subject for RE that takes an objective and balanced approach to education about religion would go a long way to shutting the door on groups seeking to use our education system for their own evangelical ends.

Until then, it's clear that head teachers need to be much more discerning about the groups they are letting into their schools.