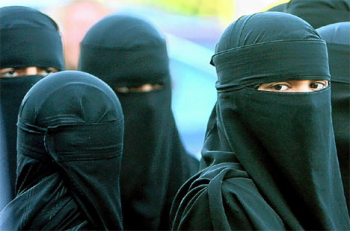 The college backed down within hours of the challenge, cowed by suggestions of racism and religious prejudice from student activist groups. The original reasons for banning face coverings — keeping the college secure — were quickly forgotten when the accusations of Islamophobia started to fly.

The Times reported on the man behind the campaign to overturn the niqab ban, Aaron Kiely, who is now under investigation for a series of inflammatory statements. The paper says:

"He is being investigated after a series of outspoken comments, including his opposition to the deportation of a notorious Islamist extremist and his accusation that the Conservative Party was "whipping up racism".

The left-wing activist is a £23,000-a-year black students' officer for the National Union of Students and is also a Labour councillor in Thurrock, Essex.

Mr Kiely, 24, said that he would oppose the ban on the niqab in any area of public life, and accused opponents of the veil of "whipping up fear and insecurity".

He described any ban on the niqab as "an infringement on the rights to religious freedom and cultural expression and a clear violation of a woman's right to choose".

He was also criticised after describing the "shame" of the deportation of Abu Hamza, the convicted Islamist hate preacher, to the United States. The student leader had previously been forced to apologise after defending the London rioters and accusing the Metropolitan Police of being institutionally racist."

The NSS was asked by the media to comment and we did so widely, sticking to our policy which boils down to this: we don't support any wholesale ban on niqabs or burkas, but we think that it is justifiable for some institutions to place restrictions on them in certain circumstances.

One of those circumstances is in court.

Judge Peter Murphy at Blackfriars court came to a rather dithering conclusion that the woman he was to put on trial for intimidating a witness, and who insisted that she wanted to wear a face covering in the dock, was told that she would only have to take it off if she gave evidence.

In his ruling — full of contradictions as it was — the judge begged parliament or a higher court to give a definitive ruling on the matter. Leaving it to the discretion of individual courts was bound to create complications. He was somewhat flummoxed by the affair and he was sure others would be, too, when faced with the same dilemma and the same pressures.

But the whole thing sparked a debate (at least in the media) that seemed, on the whole, to support the stance we had taken. Commentators generally felt uncomfortable about face coverings. They were anxious about the social consequences for the women wearing them. But, in the end, their liberal instincts won them over to supporting a woman's right to dress as she pleases — except in certain, defined circumstances and situations. There was little stomach for a French-style total ban. (This was not true of the below-the-line communities who seemed a lot less torn, with many in favour of a complete and total outlawing of face-covering veils).

In the Times, Hugo Rifkind wrote about the confusion this debate is creating:

Niqabs are very now. Last week, following a protest,Birmingham's Metropolitan College un-banned the niqab after eight years. Yesterday, a judge in Tower Hamlets decided that a woman should be allowed to stand trial in a veil except for when she gave evidence, when she would be shielded behind a screen. Already, we know what a whole bunch of politicians think about this. All speak with a strange sort of detachment, as though the issue here were a grave and complicated one, with two rational sides. Rather than what it really is, a sexist and perhaps coercive belief that a woman in public ought to have her head in a bag.

Don't flinch from this. By all means, let us debate the reach of the State, and the requirements of tolerance in a multicultural, multifaith society, and all that jazz. But at the heart of this lies the notion that a woman, by virtue of being a woman, ought to be invisible in a public space. That's a notion to which, in my view, we ought to give a big old kick every time we happen to pass it. Few things are less British than the niqab, and few things should be less welcome to a Brit.

Although that doesn't mean we ought to ban it. Well, except for sometimes, when we definitely should. Of course people shouldn't be allowed to cover their faces in airport security or in court. I surprise myself with my own vehemence on this, but there is no doubt in my mind. Yesterday's ruling in Tower Hamlets was hailed as a compromise, but it wasn't one at all. It was a surrender to somebody who was attempting to reject centuries of convention in British courts.

And this final point is perhaps the most important.

Are the women in these two cases simply pious people fighting for their individual religious liberty, or are they really determined activists, deliberately creating confrontations to advance the cause of political Islam?

It wouldn't be the first time. Remember the case of Shabina Begum, the Luton girl who insisted she wanted to wear a long flowing jilbab, in contradiction of the uniform policy of the school she attended?

As it turned out, it wasn't entirely Shabina's idea. She was spurred on by her rather aggressive brother, a member of the extremist group Hizb-uht-Tahrir.

So we must tread carefully so that our liberal impulses are not exploited and misused by people who are far from liberal.

We do need a proper debate, a parliamentary debate, to sort this out and clear up the confusion. We should have clear policies on what is and isn't acceptable in schools (instead of leaving it to individual headteachers to take the heat) and what is and isn't permissible in courts (at the same time saving the exchequer a fortune from judges having to spend time ruling on each case).

If we don't have definitive legislation, these kinds of unpleasant conflicts will continue and the Islamists will exploit them to create more and more resentment among young Muslims in this country.

Unfortunately, this is an issue that the Government is unlikely to tackle. They know it would unleash an almighty backlash not only from Islamists but from the liberals who seem to support them. Parliament would be in the same situation as the rest of us: open to bullying and manipulation by extremists who have us in a corner by using the concept of freedom to take freedom away.

Terry Sanderson is the President of the National Secular Society. The views expressed are those of the author and do not necessarily represent the views of the NSS.