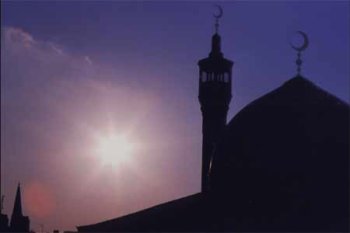 Channel 4 has set the cat among the pigeons — as I suspect it intended to do — with its announcement that it will broadcast the Muslim call to prayer every day during the month of Ramadan.

If what the chief of Channel 4 says about the network's intention to create a more positive image of Muslims in Britain is true, then it is laudable. But if it is just another publicity stunt on the lines of the Alternative Queen's Speech (delivered by the likes of Ahmadinajad and Quentin Crisp) then it risks creating another anti-Muslim backlash for not much purpose.

We'll assume that the intentions are benign, in which case we should not object to the small amount of time (two minutes at 3am and three other twenty-second bursts during the day) devoted to a religion that is followed by nearly three million people in the UK.

When you think of the hundreds of hours that the BBC devotes to Christianity each year (and much of it of a directly proselytising nature, in the form of church services and Songs of Praise) then a few minutes for the second largest religion doesn't seem disproportionate.

Britain's main broadcasters — including ITV and Channel 4 — have a public service remit that obliges them to produce programmes that reflect the whole of society – and not just ones that will appeal to the biggest audience.

Because of this obligation, ITV used to have time set aside for religious programming. But it became increasingly clear that the audience for these programmes was minuscule. ITV couldn't get advertising for them, making them economically unsustainable. Eventually Ofcom took pity, and ITV was allowed to drop its religious programming altogether.

Channel 4 was set up with the intention of appealing directly to minority audiences, the ones that don't get a look in anywhere else. It has, in the main, fulfilled this remit brilliantly, producing some cutting edge programmes and drama covering topics that more conservative broadcasters wouldn't touch. It has been a trailblazer, breaking taboos and moving society on.

Naturally, controversy has dogged it, but the channel has been true to its foundation and we should be grateful for that. This latest innovation seems like a continuation of its provocative (and, some would say, progressive) history.

The hostility that is swirling round this decision to include Islam is understandable, given the events of the past few years. But there are millions of Muslims living quietly and productively in this country, who simply want to observe their religion in peace. They deserve to see their lives reflected on TV, just like everyone else's.

People who cleave to the Muslim religion are not all fanatics, and we must make a real effort to reach out and bring those people of good will into the mainstream of society.

In purely pragmatic terms we have to find a way to live together, and to overcome the fanatics together. The alternative — conflict, violence endless hatred — doesn't bear thinking about.

A more balanced reflection of the lives of Muslims on TV would help. This small acknowledgment of their religion is only one aspect. We must see other aspects of their lives that will humanise them, too.

The danger is that the Muslim population of this country will be seen as simply ciphers, who think of nothing but religion. That is certainly the impression we get from the Muslim Council of Britain and other "faith leaders" who purport to represent "the Muslim community". TV needs to allow a more balanced version.

The point is that not all are devout and obsessed with religion. TV needs to let us see these people, too, in dramas, soap operas, documentaries.

And in doing so it can help reduce the fear and show that not all Muslims are the alien fanatics that are so ubiquitous on the news and in the papers.