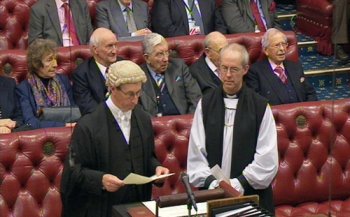 The Marriage (Same Sex Couples) Bill has passed with overwhelming support. It has done little more than re-brand civil partnerships, but symbolically its passing was a breath-taking moment of the zeitgeist, writes Keith Porteous Wood.

Even the leadership of the Established Church now recognise it as such, all the more so because it took place in the face of their implacable opposition.

More significant is the consequences of this shift of influence away from the churches. The hierarchy of both Catholic and Anglican churches staked their whole authority by insisting that the Government should not proceed with this legislation. And they lost, utterly.

Any religious group is at liberty to forbid its followers from entering into same sex marriages, but the Church went so much further: seeking to impose its dogma by law. It wanted to ride roughshod over the majority view in the country, and also against the religious/belief liberty of those of other denominations, such as Quakers and liberal Jews, who wished to permit such ceremonies.

The Established Church even came close to questioning the government's authority by stating with approval that "[m]any, within the churches and beyond, dispute the right of any government to redefine an ages-old social institution in the way proposed". Similarly, the most senior (and perhaps also now the most disgraced) Catholic in Britain, Cardinal O'Brien, announced less than a year ago with breath-taking self-importance that he had "suspended direct talks with the Scottish Government on the subject of gay marriage after relations between the two bodies became 'strained' by the proposals".

But I detect a new realism. Since his appointment as Archbishop of Canterbury was announced, Justin Welby has courageously expressed his growing unease with the Church's position. And he was clearly bruised by the "noticeable hostility to the view of the churches" in Parliament over same-sex marriage, and with the Church's stance being "utterly overwhelmed".

This debacle should prompt a long-overdue reconsideration of the relationship between Church and state.

Paradoxically, Britain is both one of the least religious countries in the world and one of the most religiously diverse. Yet because, through historic circumstance, we have an established Church, religion is given disproportionate influence in public life.

The separation of religion and politics, the essence of secularism, is essential to democratic process and accountability. It is no coincidence that the worst known per capita incidence of institutional child rape occurred in Ireland, where the Catholic Church was virtually a department of the government (or was it the other way around)? Fortunately their PM has seen the light and the Church's influence over the Government is much diminished, to the extent that the Irish commentator Mary Kenny now refers to her country as "post-Catholic".

In England, public positions were reserved uniquely for Anglican communicants, and ecclesiastical courts formerly had wide powers, even jurisdiction to grant probate. As late as the 1840s, those unable to pay hefty fines for non-attendance at the Anglican Church faced a lifetime in prison. And in ensuing decades came the emancipation of those of other denominations and religions, despite the bitter opposition of the Church. The National Secular Society's first president, Charles Bradlaugh, was denied his seat won in four elections to Parliament in the 1880s because, as an atheist, he was not allowed to take the requisite religious oath.

But even now, from a constitutional perspective, Britain could hardly be less secular, given it is the only Western nation to give bishops the right to sit in its Parliament. Every session of Parliament, even in the Commons, starts with prayers. Being in Parliament gives bishops access to ministers, and the power to hold them to account. Bishops can table amendments, including on matters that directly benefit them. And whenever one of the Lords Spiritual rises to speak, even today, etiquette demands that everyone else immediately gives him precedence.

Probably because of the bishops' presence, England and Wales are the only Western countries to require by an old law a daily act of (normally Christian) worship on every school day in every school, including notionally secular community schools. The public purse pays the entire running costs of the third of schools which have a "religious ethos". And this in a country where less than 10% of those in any age group, including older people, regard themselves as "a religious person".

One would have expected a century of decline of church attendance to have resulted in a declining influence of religion in politics, but the reverse has happened. Until now, politicians have continued to buy into the Church's own delusions of its own importance to the nation, regardless of the evidence that for most people it is an irrelevance.

Usually governments try hard to avoid confrontations with the Church, but Mr Cameron clearly thought passing this legislation was the right thing to do. He showed courage rare in politicians in recent times by pressing on despite the bitter opposition from the Church's hierarchy, seemingly out of touch with its own followers. But it is unlikely that he or his party (or any party in the near future) will have the courage to grasp the nettle of disestablishment.

We know of plenty of Parliamentarians whose instincts are secular, who recognise the value and justice of separating religion from politics, but are – we think needlessly – worried about the electoral consequences of alienating religious voters. The time has come for them to be bolder and recognise that the dire consequences the Church threatens if it is defied is unlikely to come about.

The churches' days are numbered as a political force. Maybe the water can next be tested by the government introducing assisted dying legislation in the Commons. There is even strong support from the religious, but as in same sex marriage, the Anglican hierarchy are absolutely opposed.

Keith Porteous Wood is the Executive Director of the National Secular Society. This blog was originally posted on the Information Daily.com.