Our secular society is wiser than the Church 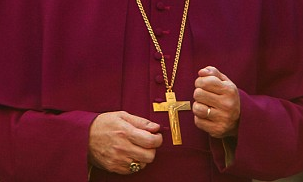 "There was noticeable hostility to the view of the Churches," the Archbishop of Canterbury told the General Synod on Friday. He was referring to the debate in the House of Lords on same-sex marriage. He added that there had been an "overwhelming change of cultural hinterland" in social attitudes.

He's right. Gay marriage will become established and there will come a time when few of its current opponents (including Archbishop Welby) will be exercised by the issue. The same was true of civil partnerships and of decriminalising homosexuality. It was also true of legislation in 1882 to enable married women to own property independently — a reform that the purported defenders of marriage likewise denounced as contrary to the natural order.

Most voters see this. The Church predominantly can't. Why does it so reliably lag social attitudes? Consider Archbishop Welby's predecessors. William Temple was influential in debates over the post-war welfare state. But his predecessor, Cosmo Lang, supported the disastrous foreign policies of Neville Chamberlain. Michael Ramsey forcefully opposed racism. But his predecessor, Geoffrey Fisher, foolishly remarked — in Africa — that "all men are not equal in the sight of God though they are equal in the love of God". Rowan Williams bizarrely declared that adoption of Sharia in some parts of Britain was unavoidable.

The Church eventually acclimatises itself to intellectual discoveries, such as Darwinism, or the expansion of liberty, such as opening civic and military office to non-Anglicans in the 19th century. There are rare scholars who have drawn wisdom from theological reflection, such as the great Protestant ethicist Reinhold Niebuhr. But modern secular culture is wiser than the Church. Science and liberalism are critical, whereas religion aims to uncover the true meaning of sacred texts and revelations.

Always looking backward, the Church is late in catching up.

Oliver Kamm is a leader writer for The Times. This article is reproduced with the author's permission. The views expressed are those of the author and do not necessarily represent the views of the NSS.

Jesus of Nazareth is attributed with saying many...