Human rights are for humans, not for ideologies 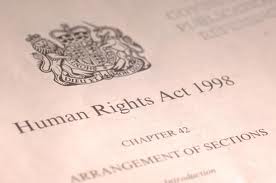 A Jewish man has won an employment tribunal case for racial and religious discrimination after his employer made derogatory remarks about "Yids" and suggested that he would like to lock up and gas Jews.

Darren Feldman was bullied and abused by his manager because of his religion. He was driven out of his job by the boorish and racist attitudes of his manager.

He quite rightly used the law to gain some redress, and the equality regulations brought some kind of justice to him.

That is what the Equality Act is supposed to do. It is there to protect individuals like Mr Feldman from being persecuted and disadvantaged because of — among other things — their religion.

What it is not there for is to protect religious belief.

And that is where Mr Feldman's case differs so fundamentally from that of Lillian Ladele, the Islington registrar who wouldn't perform civil partnerships for gay couples.

Ms Ladele was not being bullied because of her religion, she was using her beliefs to create a confrontation with her employer that she hoped would result in Christianity being given a special status in her workplace. Her employer was simply asking her to carry out her duties in their entirety, just as her colleagues had to do.

This was not about her rights as an individual, it was about the right of her religion to be given special consideration that other ideologies cannot and must not have.

But human rights are for individual humans, they are not for ideologies or theologies. The Equality Act was put in place to protect individuals, not their beliefs.

If beliefs are protected, then who will defend individuals who contradict or fail to abide by those beliefs?

The evangelical groups who have driven this push for special rights for Christians in the workplace have tried to argue that a person is entitled to manifest their religion freely (which they are). But they want to redefine this right into the ability to take rights away from other people. Much to their frustration, the European Convention on Human Rights expressly forbids this.

Freedom of thought, conscience and religion

1. Everyone has the right to freedom of thought, conscience and religion; this right includes freedom to change his religion or belief and freedom, either alone or in community with others and in public or private, and to manifest his religion or belief, in worship, teaching, practice and observance.

The right to practice religion is guaranteed in every human rights charter ever written, but it is never an unrestricted right. It can't be or human rights would quickly become meaningless in the light of religious persecution of all kinds of people and minorities of whom the church or mosque didn't happen to approve. Unmarried mothers? Divorcees who want to remarry? Infidels and atheists?

The other day I was taking part in a debate on a Muslim TV channel with a young man who could not grasp this concept. Why couldn't there be an exception for Lillian Ladele, he wanted to know. Why were her rights to her religion less important than the rights of homosexuals? Why couldn't an exception have been made for her so that her religious conscience would be clear?

I asked how he would feel if a registrar was a member of the EDL who objected to dealing with Muslims? Would it be OK to make an exception for them? Would it be OK to exempt a racist who refused to deal with black people on the basis of their 'beliefs'? Or was it just gay people who deserved such degrading treatment? And just religion that deserves these special exemptions?

He was momentarily flummoxed but quickly went round in a circle and started to ask the same questions again.

The idea that human rights are there to protect individuals and not organisations or ideologies, is difficult for some people to grasp. But grasp it they must, for human rights are too important to be sacrificed on the altar of never-ending religious demands.