How do we keep religious education out of the hands of the evangelists? 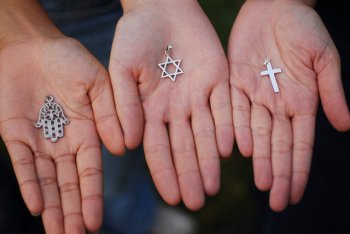 How can schools tell children about religion in a way that is fair, objective, unbiased and, most important, doesn't close them off to alternatives?

How do we best explain to them that while some religious believers find comfort in their faith — as well as a motivation to do good — others find that it feeds a seething hatred?

The traditional approach to this topic has been "religious education", a mandatory subject the direction of which is largely dictated by religious authorities, who could hardly be described as disinterested parties. As A.J. Higginson put it, in an article for Huffington Post:

"RE classes are a chance for pupils to learn and understand about the diverse world religions. A dilemma occurs when you allow faith schools to teach according to their beliefs, once that happens, the lid of Pandora's Box is never far from being opened."

The Government is under increasing pressure at the moment by those very religious interests to increase and strengthen religious education in schools. The Church of England's ambitions to take control of the education system is not one that is opposed in any way by the Education Secretary, Michael Gove. Or, as Andy Yarrow, head of Chelsea (CofE) Academy put in an article in the Times Education Supplement:

"Forced religion is counterproductive. But when children leave Chelsea Academy, I want them to have had an entirely positive and attractive experience of Christianity, so they say, 'I like that. I want more of that.' The great commission that has been given to the Church is to spread the good news of Christ. Church of England schools are about sharing what Christianity means, communicating the gospel message, but they are also about unconditionally loving and serving the world."

Now, though, an increasing number of parents are feeling uneasy about the way RE is being taught and are wondering whether religion, as it is presented now, has a legitimate place in schools at all. They want to know if there is another way to tell children the facts about religion that does not, at the same time, try oh-so-subtly to bring them into the fold.

The Americans and the French, with their secular constitutions, have neatly solved the problem by excluding religion entirely from their publicly funded schools.

But Britain does not have the benefit of a secular constitution. We have instead an established church, which, to be fair, played a large part in the creation of our education system. So we have to give credit to the church for kick-starting education-for-all in this country.

But now that the government funds universal education, why is the church still so deeply entrenched? A poll of 29,000 schoolchildren in Britain conducted for the International Seminar on Religious Education and Values showed that 58% identified themselves as atheist or agnostic. This revelation was backed up by a study from the National Centre for Social Research, which showed that in 1994, 55% of 12- to 19-year-olds said they had no religion, a figure that had risen to 65% by 2003.

Children, then, are increasingly expressing severe doubts about the veracity and value of religion as a basis for life...

Religious education so easily morphs into religious instruction and thence to religious propaganda and evangelising. Enthusiastic believers who are drawn to teaching sometimes cannot stop themselves. This week I was on a radio phone-in show in which parents told horror stories of their own experiences: how a five-year-old had been told by the RE teacher that if she didn't believe in God she would go to hell, or how a nine-year-old asked in class "if God made everything, who made God?" and was told to shut up.

The only way to stop this kind of abuse of a child's intellect is to abolish the concept of "religious education" entirely. Let's call it something else that will allow us to move away from the sentimentalised, sanitised version of religion that is, at the moment, pumped into children's heads at school from the age of three. Something like "philosophical and ethical studies".

That would give us a fascinating palate of topics to draw on. Religion would be there, of course, but it would take its place with other approaches, to be examined critically. If we take the label of "religious education" away, we free ourselves from the need to give religion special privileges and the biased presentation it gets at the moment. We can look at it in a much wider context while, at the same time, other valuable world views that have been shoved out by religious dominance would get an equal-opportunity look-in.

After all, there is a strong argument that the values of western civilisation are not based on Christianity at all, but on the earlier thinking of philosophers such as Plato, Aristotle, Epicurus — and even Confucius. How often do the grand ideas of these formative figures get an airing in RE?

The dominance of Christianity in our schools is a product of historical circumstances — circumstances that have radically altered in the past 50 years. Once there was a single religion in this country, but now there is a multitude, some of them venerable, some of them very recent — all of them in need of rigorous examination and challenge in a fair school system.

So in an ideal world — well, my ideal world — children would be able to explore the big questions through a host of philosophical approaches that would not inevitably lead back to God. We start with a completely blank canvas and then we add to it from the richness of human genius, which could, of course, include Jesus, Mohammed and Buddha, but only as part of a throng that would also include Thales, known as the father of philosophy, who flourished around 585BC and who was the first to come to the conclusion that human reason is sufficient to answer questions about the nature of the world. We would have Socrates, who gave us the concept of civic virtue, and we need to know about the Cynics and about Epicurus's formula for a happy life.

There are Cicero, Diderot, Hume and the many gifts of the Enlightenment. The marvellous insights provided by these great philosophers have done as much to shape human life in the western world as the ancient religions of the Middle East have with their incredible claims and their vengeful Gods.

In my ideal school, religion would not be permitted to side-line every other human explanation for the meaning of life. Children who have rejected religion are not doomed to live a life of anarchy and nihilism. The world is full of marvellous philosophies and ethical systems that can inform morality. But the Old Testament God is, by his own admission, a jealous God, and he doesn't take competition very well. All the same, we must put to rest, once and for all, the propaganda that all that is good flows from a divine source.

A well-rounded, truly unbiased approach to ethics would equip our children with a real ability to make informed decisions about how they want to live their lives and where they will find their morality. It will also enable them to judge religion on its real, rather than its trumpeted, merits.