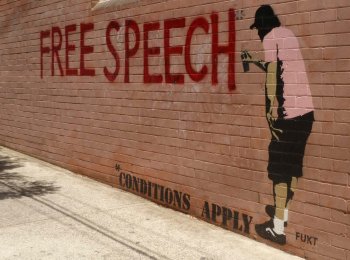 The controversy arising from Rowan Atkinson's comic relief sketch back in March, in which he poked fun at the newly anointed Archbishop of Canterbury, has this month been cleared of breaking any broadcasting guidelines by Ofcom. However, it is a stark reminder of the precarious nature of free speech in the UK today — especially in instances where the subject of discussion is religion.

The controversy stems from the omission of the sketch on iPlayer of the comic relief show in response to the 2200 complaints received. When questioned on the absence of the sketch, the official response stated that the piece was problematic due to the 'subject matter' and the language used. It was pre-watershed so they '...took a swift decision to remove it from BBC iPlayer'. Given that the language issue could be neutralised by making use of the adult content warning on the iPlayer, one is forced to conclude the main reservation the corporation had was with the nature of the material.

Atkinson is no stranger to the fine line that humourists walk when working with potentially controversial subjects, in fact quite the opposite. He was an ardent critique of the Racial and Religious Hatred bill of 2006 becoming law. Recognising the curbs to freedom of expression it could have on satirists alone provided enough ground to be fearful on the wider social implications. Laying substance on his claims he cited sketches he himself had been involved with on programmes such as 'Not the Nine O'clock News' which could have been prosecuted if the bill had it been in law at the time. The self-censorship and restraint writers would be forced to employ could render religious institutions and beliefs immune to criticism or mockery, throwing the nation back to a time in which the enlightenment had simply never happened.

Such reservations were evidently felt in Parliament at this point as well, given that this was the third time in four years the government had tried to get such a piece of legislation though both houses. The bill itself sought to make an offence of inciting hatred of a person or community on the basis of their religion. While few would argue over the need to protect from and prevent the marginalisation and persecution of religious minorities, such a bill would clearly be detrimental to the nature of free speech within a healthy democracy, being described by Atkinson at the time as being akin to "using a sledgehammer to crack a walnut".

Any discussion over the point at which critical discussion, mockery and satire become bigotry and persecution is so evidently a mire of grey that one wonders how much faith to place in the way those required to enforce it would elect to. Set against the backdrop of the way in which Section 5 of the 1986 public order act was being readily invoked, a clause which outlawed harassing and/or causing alarm or distress to individuals or groups, such concerns were anything but groundless.

The infamous Section 5 clause, which has only very recently been revised, was being routinely used to make offences out of incident so innocuous they'd be laughable if they didn't carry such serious consequences. These include the arrest of an officers horse being called 'gay', and the case of a peaceful protester detained for holding a placard saying Scientology is a dangerous 'cult' — not that any complaints were raised about the sign by a member of the church, but an officer monitoring the protest who himself was not member of the faith saw fit to burden the insult he envisaged a member would have felt.

The point was in fact made at the time that both the Bible and the Qur'an would be in breach of the Religious Hatred bill if introduced, due to the incitement to violence various passages in each respective text demands of their followers. Such concerns, however, were ultimately rebuked as the Human Rights act of 1998 guarantees freedom of religion and self-expression, and accordingly any state encouragement to modify or omit any sacred texts would be in violation of this.

The bill ultimately became law in 2007, making a crime of anyone who "...uses threatening words or behaviour, or displays any written material which is threatening, is guilty of an offence if he intends thereby to stir up religious hatred." with the apparently aforementioned exemption afforded to religious texts. Despite the campaign against the enactment failing, it did achieve an late amendment stating it could not be used to "prohibit or restrict discussion, criticism or expressions of antipathy, dislike, ridicule, insult or abuse of particular religions or the beliefs or practices of their adherents..." in order to safeguard the perceived threat critiques were concerned would arise.

In spite of even these protections however, discussions of a religious nature – even in private — were demonstrated to be delicate as two hoteliers found in 2009 for suggesting the Muslim veil is oppressive to women and the prophet Mohammed was a 'warlord'. However ignorant one may consider such comments, merely having a conversation to illuminate, discuss and challenge such views saw the hoteliers being questioned by the police for potentially violating the act.

Things aren't all bleak though. Since the Racial and Religious Hatred bill went on to become law Blasphemy was taken off the books in England and Wales, though it remains in force in Northern Ireland. The campaign to reform Section 5, which Rowan Atkinson was again outspoken on, was successful and the amendments will become law later this year. And, as mentioned, Ofcom ruled this month, after 'careful consideration', that his Comic Relief Archbishop sketch wasn't breaking any of the broadcasting guidelines. Of more immediate concern is that such conversations need to take place on these matters at all by the regulator, and the level of capitulation broadcasters sink to when they fear religious sensibilities have been offended.

The question one may wonder is the extent to which Atkinson was being deliberately provocative with his air time? But, when a situation exists where a comedian dressing up in a costume and poking fun at a major English institution may run afoul of legal protections afforded to its sector of society, one ought to commend him for bringing to the fore the ridiculous predicament such ill-conceived legislation can give rise to.