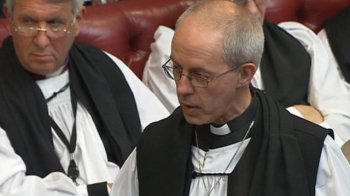 So, the prospect of gay marriage took a mighty leap forward in the House of Lords this week as the intended "wrecking amendment" was itself wrecked by a steamrolling 242 majority against.

During the two-day debate leading up to the vote, their Lordships kept complimenting themselves on how well-informed they were, how civilised. What a high quality of discussion this is, they kept saying.

But anyone who sat through the turgid, repetitive hours of self-indulgence and bigotry would be hard-pressed to agree. And then some of them had the nerve to claim that not enough time had been allocated!

As well as stupid, patronising remarks about how "artistic" and "lovely" gay people are, there were ridiculous claims about artificial insemination for the monarchy and how it would soon be impossible to designate a gender to anyone. Norman Tebbit, sitting there with a face sour enough to curdle milk, was accused of being an ace scaremonger for his barmy exaggerations.

One ghastly reactionary after another trotted out the justifications for their opposition. Most of them declared their Christianity as the motivation. Listening to the debate, you would have thought the whole country was suddenly living back in the 1950s. But it was these reactionaries who got the lion's share of the media coverage.

There were coming-out stories, too, with one Baroness announcing her lesbianism for the first time and several others revealing that they have gay children or relatives.

In the end, the peers voted for the liberal option (except the Minister for Faith and Communities, Baroness Warsi, who abstained, preferring once more to put faith before communities).

Given that the House of Commons had approved the Bill by such a large majority, if their Lordships and Ladyships hadn't done the right thing, it would once more have called into question their legitimacy.

There will be further attempts no doubt at committee and report stage to sabotage the Bill, but it all now looks hopeless for the opponents. Same-sex marriage is going to happen and there is nothing that the Christian Institute, the evangelical activists and the ancien regime can do to hold back progress.

One of the most telling elements of this was the presence of the bishops. One peer said he had never seen so many bishops in the House before – 16 by one count.

Yet only nine of them voted for the amendment to kill the bill. Did the other seven abstain? Did they go home for afternoon tea?

The Archbishop of Canterbury, in his muddled speech, issued an apology to the gay community for the centuries of cruelty and injustice that his church has heaped on them.

But his words rang hollow as he then voted against a bill that would have gone some way to putting right those wrongs.

It seems strange to apologise for kicking a person while continuing to put the boot in. So, apology not accepted, Mr Welby. If you're truly contrite about the way your religion has treated gay people, you'll stop the present campaign. Now.

And this defeat for the Church of England may yet have more serious ramifications. It has been speculated that gay marriage will bring the nation nearer to disestablishment. The Church of England has negotiated itself into an uncomfortable corner with its triple locks and refusal to permit gay marriage anywhere near its premises. It is supposed to be the national church that will marry anyone who asks. Except some people. Its position is untenable.

Let us hope that soon our constitution will be brought into the 21st century. And let us start by getting the pompous, self-important bishops out of our legislature and back into their churches where they belong.