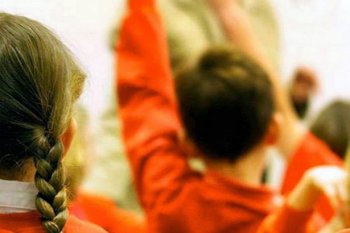 The last few weeks have seen the topic of religious observance (RO) in schools hit the headlines in Scotland. Two petitions have been lodged, one at central government and one at local government level.

Secular Scotland, a group of Glasgow secularists, launched a petition asking the Scottish Government to change the current parental RO opt-out provision to an opt-in, while petition by NSS member and Edinburgh parent Veronica Wikman, backed by Edinburgh Secular Society, asked the City of Edinburgh Council to remove RO completely from Edinburgh schools.

Some observers believe that the issue of RO in schools will be the next battleground when it comes to "culture wars" in Scotland once the same-sex marriage debate has run its course. This is partly due to the highly questionable objectives and nature of some Christian groups now active in schools with the blessing of the Scottish Government's guidance on RO, and indeed with the patronage of the Church of Scotland and the Catholic Church in Scotland.

Predictably, both petitions have drawn fire from religious interests north of the border. Michael McGrath, director of the Scottish Catholic Education Service, said religious observance was part of the "fabric of the community life" in Catholic schools and they would contest any effort to remove the statutory requirement for it. McGrath added: "Some secularist groups appear determined to dismantle any public signs of this country's religious traditions, values and practices. We would be happy for them to establish their own schools as 'non-faith schools', just as the Catholic community did in the 19th century."

So here is the Catholic Church solution – yet more sectarianism in Scotland from an organisation that assails us regularly with its victimhood as a result of the sectarianism we already have. It wants this new sectarianism introduced into an already sectarian education system, where yet more innocent and intellectually vulnerable children are to be segregated and educated separately in accordance with the religious beliefs of their parents. And of course McGrath prefers to rely on the old euphemisms of 'traditions, cultures and practices' when he really means privileged access for religion for purposes of indoctrination.

McGrath added that his solution would allow non-believing parents "to promote their own values."

A similar call was made by a Dundee Free Church of Scotland minister and director of an organisation called the Solas Centre for Public Christianity. The Reverend David Robertson has urged the government to allow secularists and the Churches to run their own state-funded schools, to ensure that parents are offered "real choice, real diversity and equality" and where secularists "have their schools, teaching their values and let the Churches return to a system where we run state-funded Christian schools."

Robertson's proposed solution points up additional problems. The National Secular Society maintains that schools should teach universal values, common to all regardless of what any parent believes or doesn't believe about the supernatural. An education system that teaches different sets of values to different sets of children cannot possibly lead to a safer, happier and more integrated world.

Robertson's church has been one of the most ardent and high-profile critics of equal rights for gay people and same-sex marriage, occasionally rivalling the now disgraced Cardinal O'Brien in its splenetic outpourings. Robertson himself wrote a book to challenge the God Delusion by Richard Dawkins, arguing from essentially a biblical creationist perspective. One wonders what values would be taught in his Christian schools about the role of women in society, or a woman's right to control her own body, or evolution or the rights of gay people. No doubt there would be more Islamic, Sikh and Hindu schools in Scotland too, and thus even more religious sectarianism and competing values, with the 'diversity' on offer being little more than further segregated and isolated communities running parallel with segregated after-school activities such as scout groups.

In an interesting aside to this debate, there are independent schools in Scotland run by the Focus Learning Trust, a front for the Plymouth Brethren Christian Church and which claims its schools "are committed to values that are based on the Holy Bible" and uphold "fundamental Christian teachings and beliefs" and "the truth and authority of the Holy Bible." Yet the Trust also states on its web site that while its schools are registered as Independent Schools with a Special Religious Character, "no formal religious observances or services are held at the school. Current Affairs and Bible Studies programs are the responsibility of the community."

It is reasonable to ask why the Scottish Government is promoting Religious Observance in schools while a fundamentalist Christian sect doesn't bother with them and sees them – rightly, as it happens – as the responsibility of family and community outwith the school day and life.

Whatever the merits or otherwise of the secular petitions currently lodged in the administrative processes of government is Scotland, two things are clear. One, whether examining the denominational or non-denominational school system in Scotland, both petitions draw attention to the fact that schools have been turned into pulpits and churches, while secularists would argue that schools should be for teaching, not preaching. Two, both petitions have managed to force the religious to reveal their own take on the purpose and nature of Scotland's education system – to be a playground for sectarianism, discrimination, segregation and indoctrination. Or should that be "real choice, real diversity and equality?"