Bishops in the House of Lords – too political or not political enough? 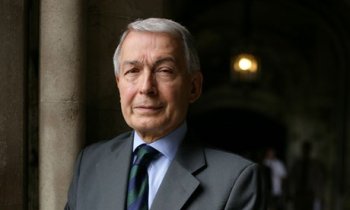 The Labour MP Frank Field (right) has called on the Archbishop of Canterbury to hand over some of the seats that the Church of England bishops occupy in the House of Lords to representatives who would take a more active part in policy making.

This call has added significance because Frank Field is a prominent Christian and a former member of the General Synod.

But before we run away with the idea that Mr Field thinks the bishops have no business making law, we should look at what he actually said.

Writing in The Independent, he called on Justin Welby, to revive Lords reform by handing most of the "25 seats" (actually 26 seats) to people from employers, trade unions, universities, the arts, armed forces, the law, the media and women's and children's groups.

Mr Field, a former Welfare Reform minister, said that 43 bishops issued a statement criticising the Government's welfare cuts in March. But only six of the 16 who sit in the Lords turned up when the House debated them and only one took part in all four votes.

"This turnout of bishops is the worst kind of gesture politics," he said. The voting record of bishops suggests their places in the second chamber are being "wasted", he added.

Mr Field said: "It may be that the Church of England now appoints bishops who feel they have nothing to say to the nation on the great ethical issues of the day. Some could quite legitimately believe that their time would be better spent in their dioceses. But it surely cannot be impossible for bishops, who sign protest letters, to so organise their diaries that they can turn up and put their votes where their mouths are."

The MP for Birkenhead said his proposal would enable the Lords to represent the "moral aspirations" of the nation, kickstart Lords reform after it was killed off by the Conservatives last year and strengthen the groups that make up David Cameron's Big Society.

So, rather than wanting the bishops to return to their cathedrals and get on with their job of saving the nation's souls rather than interfering in politics, Mr Field wants them to get more involved. He wants them to butt into policy-making at every opportunity.

But what qualifications do they have for such interference? We are told that because the new Archbishop of Canterbury once worked in the City, it is OK for him to pontificate about banking reform and how it should be achieved. But is it?

What has that to do with the Archbishop of Canterbury's primary purpose? If he wants to be a banking regulator, let him go and be one. Otherwise he should stick to more generalised comments about the need for moral behaviour from bankers and others engaged in the business of greed. Proposing detailed solutions to the problem really is not his purpose.

Strangely, it is someone with whom I often disagree who best summed up this "mission creep" by the bishops. Writing in the Church of England Newspaper, Andrew Carey (son of the increasingly silly former Archbishop of Canterbury, George Carey) said:

"I've noticed an increasing mission creep in the Bishops' contributions to Parliamentary business in recent years.

Rightly, the Peers Spiritual are committed as never before to the House of Lords. The continual focus on constitutional reform has focussed their minds and seen them committing more and more of their time to Parliament.

Any assessment of their role in the House of Lords will find that for the most part the Bishops contribute positively and painstakingly to debates in the Second Chamber. But I've noticed more and more speeches and, indeed questions, where there is no reference to their day job, nor any acknowledgement of the limitations to their knowledge and authority.

Take one example, in a short debate on 22 April on nuclear energy, the Bishop of Hereford made a number of extremely good and relevant points that were not made by other well-informed members of the House of Lords. He put his supportive weight behind the nuclear path, in meeting emissions targets.

He commended Thorium and molten salt reactors in the medium and long-term; called for fission research; argued for a new fit-for-purpose remit for the national decommissioning authority and called for greater government involvement and support for those building a future generation of reactors.

The last thing I want is for every single speech in the House of Lords to turn into a theological treatise or a whimsical 'Thought for the Day', but I'm equally uneasy with the thought that the bishops are turning into politicians.

In my view they are in danger of making the mistake that being busy in the House of Lords is enough. My view is that any contribution to political business from ecclesiastical office needs a clear and spelt-out rationale. Of course, the churches should be outlining the implications of the gospel for everyday life and social and political issues. But there is a limit to the church's expertise. And it is at these limits that the policy-makers, civil servants and think tanks take over.

So there you have it. Two Church of England enthusiasts, one who thinks the bishops aren't political enough and the other who thinks they're too political.

The appropriate answer to this conundrum is to get them out of parliament altogether and let them use their pulpits to spread their message.

But they know that if they did that, no-one would be listening.