Why so little openness in the establishment of these Sikh schools? 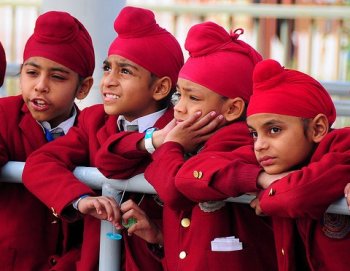 Last month the local press reported that a Sikh free school "remains on course to open in Hounslow in September": but there has been no reporting of the secrecy and subterfuge surrounding its establishment.

Attendance at the only public meeting about it in December was completely unrepresentative. Wide-ranging questions put to the organisers by the few non-Sikhs were not answered. No offer was made to supply answers later. The local paper printed nothing.

In February the Department for Education alleged "wide support" for the school, but provided no evidence to support the claim. I was advised to write to the "Nishkam Trust" (the organisation behind the school), which responded: "Full demand figures and collection methods are supplied through the formal application process to the Department for Education for their assessment".

Another Sikh Trust also intends to open a school this September, in Stoke Poges (near Slough). The local council discovered this only in January, from a newspaper report. The school's recruitment drive had focused not in the local area, but on Sikh communities in neighbouring Slough, Southall and Harrow.

Did Nishkam use similar techniques? Is that why they refuse to disclose what support they have?

After the 2001 race riots, Home Secretary David Blunkett commissioned Professor Ted Cantle to produce a report into the causes. In 2009 an updated version expressed particular concern about schools being even "partly segregated on religious grounds", observing that segregation can perpetuate disadvantage, limiting choice and aspiration (becoming a dangerous vicious circle).

Later in 2009 the think-tank Ekklesia summarised an opinion poll by the Equalities and Human Rights Commission where 60% of the population considered religion more socially divisive than race, and another by YouGov, where 75% wanted all schools to teach a balanced syllabus about a wide range of religious and non-religious beliefs.

This year Professor Cantle affirms that school segregation still divides communities. Problems are becoming more acute. Imprisoning children in a limited world of their own like-minded communities is a recipe for disaster. He wrote: "All public services need to reconfigure services across communities and especially to avoid targeting and separating groups in the name of cultural sensitivity ...Separate provision also completely undermines opportunities to build shared purpose and to develop empathy and understanding of others. Perhaps the most difficult of service areas is education, where local authorities ... will need ... even to merge segregated schools together".

If further evidence is required, an apparently honest and well-written book by two Sikhs, (Sikhs in Britain: the making of a community, 2006, Gurharpal Singh & Darshan Singh Tatla), paints an extremely damning picture of Sikh ethos.

Local papers in Stoke Poges have printed much coverage: and the council, in keen opposition, has organised a public meeting with the local MP.

Hounslow Civic Centre, on the other hand, is meekly acceding to Nishkam's demands, refusing even to consider a similar meeting here, to determine public feeling about an issue on which consultation to date has been an utter sham.

Nishkam also propose to open a school in Leeds in 2014. But Leeds Council learnt about this only when I approached them.

I am deeply concerned that Hounslow's proposed school is being rubber stamped with no meaningful public consultation; that the Trust is ignoring bona fide public concerns; that Hounslow is refusing even to inform residents what is happening and why; and that the Department for Education, whatever their highly dubious role in this may be, are failing to ensure that the process is being managed with even lip service to elementary ethics. Democracy? Localism? Not a whiff!

Clearly there are related problems in Stoke Poges and Leeds. How widespread is this across the country? How many sectarian scandals are being deliberately concealed from public view? And how and when can we ensure that local and national government take heed of Professor Cantle's urgent recommendations to avert further segregation and violence?

Following the publication of this post, we received an objection from the Network of Sikh Organisations. We asked John Hunt to respond to this complaint and you can read both the complaint and John's subsequent reply here (pdf).