Why are children being forced into faith schools? 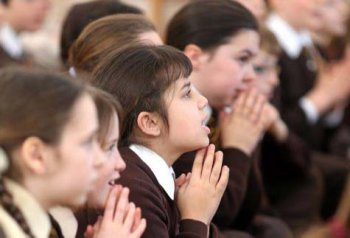 When primary school places were allocated in England last week, around sixty thousand families missed out on their first choice of school. For some parents, this meant their children being placed in a 'faith' school – often against their wishes.

In one of the more farcical cases, non-religious parents were unsuccessful at securing a place in any of the five community schools they listed as preferences – and have instead been allocated a place for their son at an Orthodox Jewish School that aims to 'promote religious beliefs and practices fostering a pride in their Jewish identity'.

Naturally, this isn't the kind of education they had in mind for their son.

Then consider that the local authority also allocated a child from a Muslim family at this same Jewish school (again against the family's wishes) and you have the makings of a sitcom. But for the parents involved, it really isn't that funny.

The Government argue that the existence of 'faith' schools creates a diversity of provision that offers greater opportunity for parental choice. But for the non-religious, and those not of the dominant Christian faith, the exact opposite is often true.

In many areas, particularly rural locations, schooling with a 'religious' ethos is the only game in town, and parents are left with little choice but to hand their children over to the Church to be educated.

How on earth did we get into the position where a state education system in one of the most secularised nations in the world isn't able to provide parents with a secular education for their children?

Of course, one reason is that in terms of a national system of education, the Church got there first. Its dominance in our schools is a product of historical circumstances – but circumstances have changed radically in the past 50 years. The Church's past role no longer justifies its enormous influence over our education system today.

Around a third of our state funded schools now have a religious ethos – the vast majority Christian. This is juxtaposed against a background of rapidly diminishing religious belief in the UK, which highlights not only how unsustainable and inefficient this is, but importantly, just how inappropriate it all is.

Religiosity in the UK is not only in decline, it is also becoming increasingly diverse. Northern Ireland is a living example of why the least appropriate response to this situation is to create a state education system where religious groups are encouraged and funded to open schools for parents that wish to segregate their children by their religious beliefs. But this is precisely the road successive Governments have gone down.

Conscious of the inherent unfairness of the dominance of Christian church schools within our school system (but unwilling to challenge it), part of the appeal to the Government of the free schools initiative is that it enables religious minorities to open schools that cater specifically to their religious and cultural beliefs.

Minority faith groups are now starting to see the appeal. We've recently seen a flurry of new free schools with a Sikh ethos being proposed. This is unfortunate, because in many ways, Sikhs have been the most successful at fully integrating themselves into British society. The fear is that with a proliferation of single faith schools, this could now be put at risk.

However 'inclusive' these schools claim to be, you can't escape the fact that the intention is to segregate children into religious groups and inculcate them. Even when minority-faith free schools only select 50% of their pupils on faith grounds, the majority of the remaining places are filled with children from that same faith background because only families from that particular faith background find them appealing.

That leaves a mono-religious, and often mono-ethnic school environment that denies children the opportunity to meet and make friends with a mix of people in a secular setting – which is, I would argue, the best preparation for life in modern Britain.

But as Professor Ted Cantle, Chair of the Interculturalism Community Cohesion (iCoCo) Foundation, has pointed out (pdf), this is an issue nobody seems willing to tackle. Partly because it's in the 'too difficult' box, but mostly because of a lack of will and imagination of political leaders to work towards a shared society.

It's already unacceptable that young people's rights are being violated by the law requiring a daily act of (broadly Christian) worship in all state schools. But it is intolerable that as the shortage of primary school places becomes more acute, an increasing number of families are finding the only state education available to them comes with a 'religious ethos' attached.

A report from the National Audit Office last month said an estimated 250,000 new places (mainly primary) will be needed by autumn 2014 to meet rising demand caused by the rising birth rate. Meanwhile, the body that represents London's 33 local authorities says at least 118,000 more state-funded school places will be needed in London alone within the next three years.

These places need to be created in non-selective and inclusive community schools that provide education without feeling the need to push religion on pupils at every possible opportunity – because the fact that we're forcing children into 'faith' schools against the wishes of their parents is nothing short of a national disgrace.