Miliband should keep his party away from priests 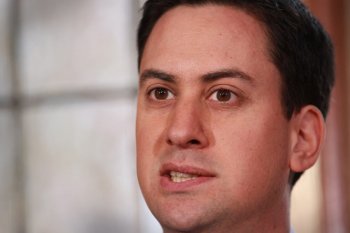 Amid his spectacular enthronement, the new Archbishop of Canterbury, Justin Welby, managed to say something spectacularly wrong. "There can be no final justice or security or love or hope in our society if it is not finally based on rootedness in Christ." People have been seeking security, love, hope in society since long before Christ, and millions do so today without His guidance. Ideas of a good society unite or divide people in their own terms. People can and do decide what makes a good society – and whether they have reached it – without reference to any religious or spiritual doctrine.

The Labour party has always appealed to universal human values, and asked people to work for a "good society" which is derived from them. For many members the journey into the party may start from religious faith – but the subsequent journey and the final destination have different signposts.

Unfortunately, instead of challenging the new Archbishop's egregious statement, the Labour leader, Ed Miliband, asked for an encore. He invited him to get more involved in political debates. "I said he should intervene" (he told The Times on 23 March). "The Church has a closeness" (a curious expression: did he mean a cloister?) "and a sense of what is happening in the community. It's good that he cares about injustice, it's good that he stands up and talks about poverty and disadvantage."

Archbishop Welby (the first in our history with significant business experience) is undoubtedly too astute to turn the Church into the Labour party at prayer. Nonetheless, Ed Miliband's invitation was a mistake and a wrong turning in British politics. In Ernest Bevin's words, it opens a Pandora's Box of Trojan horses.

For centuries, our country – at least the English part of it – has been blessedly free of religious politics. Faith-based parties have made no headway. Very few major political issues have been influenced by faith groups (although they have, almost without notice, taken control of around a third of our publicly-funded schools). Very few voters take guidance or direction from faith leaders. We need to keep things that way. They make it easier for our democracy to handle contentious issues, because our political divisions do not become articles of religion.

The coalition government has already threatened this precious legacy by appointing the first-ever Minister for Faith, Baroness Warsi. Its motives were murky but it established Faith is an organ of government. Her official job description includes the promotion of faith and she has a budget (tiny but specified) for activities by people of faith. She told the House of Lords on 17 January that her specific role "is to ensure that the voice of people of faith is heard [in the formulation and implementation of policy], which has not always been the case."

The Labour party has not challenged this position or its declared purposes, and now its leader wants to see more involvement of religion in British politics. His invitation to the Archbishop must logically extend to leaders of all other faith groups. If they accept it he will have an invidious task for which he is neither paid nor qualified: deciding what constitutes a religion (as opposed to a sect or a cult) and deciding whether any particular leader is truly representative of the community in question. Even churches with defined hierarchies regularly defy their leaders, particularly when they speak contentious social and political issues, and it is never profitable in any country for secular politicians to become embroiled in arguments within faith groups.

Ed Miliband's invitation to the new Archbishop was peculiar since he remarked, in the very same interview on 23 March, that religion is "an incredibly vexed political issue" in the United States. Indeed. Organized American religious groups believe that they have a special right to influence the law and public policy at state and Federal level, and thereby to force non-believers to comply with religious values they reject. They seek public subsidies or tax concessions for their views and practices. They try to punish politicians who oppose them. The American elections last year suggested that the influence of organized religion is waning: voters, particularly younger ones, did not take their church's agenda to the ballot box and they did not vote with a secondhand conscience.

Just when America is breaking free of the thrall of religious politics, our political parties seem determined to bring it to Britain.

Ed Miliband should (politely) withdraw his invitation to the Archbishop and the implied one to other religious leaders. He should announce that his party will not solicit votes, members or money on religious grounds, nor give religious groups any special access to policy making. In government, he should commit Labour to protect all religious beliefs but promote none, while also making clear that religious belief will always yield to the law and to basic human rights, particularly those of women and children and the right of expression.

It would be "the right thing to do" and politically profitable.